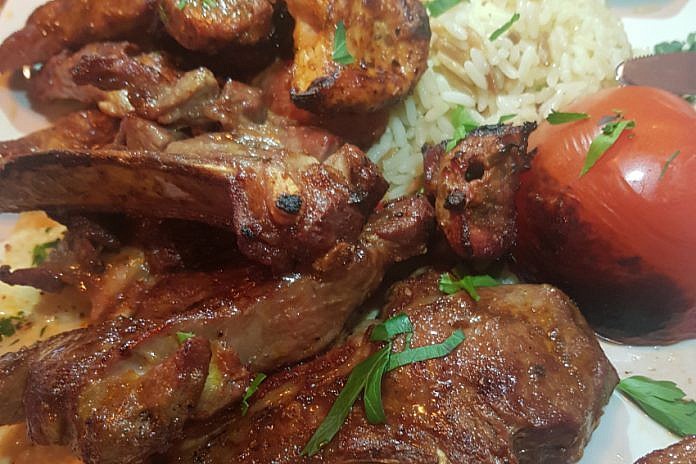 Where the locals eat usually means the food is authentic. In conversation with Mr Whyte, a Turkish @uber driver suggested we hit up @Capital_restaurants in Edmonton if we really are trying to find London’s #BestTurkishRestaurant because that is where he dines when feeling homesick.

As soon as Mr Whyte & Tongo entered Capital they were welcomed like regulars. “Sit where you want” the friendly waitress instructed. So we did!

STARTERS: The bread aka the starters – you know this is important to the Man Dem. Our free bread arrived fresh and warm. Not the tastiest Turkish bread we have ever had, but at least it was fresh and there was loads of it! Not a bad start.

MR WHYTE (aka Cheese Lover): I couldn’t see my preferred Adana Kebab and Chicken Shish mix on the menu, but since they are treating us like regulars I thought I would test the waters and ask for a combination that wasn’t on the menu. Our friendly waitress said yes to the Adana and Chicken Shish combo without hesitating. The exemplary service continues. But wait, Tongo is adamant he wants Lamb Shish which wasn’t included in his order. I am a team player and agreed to order a combination that included my beloved adana kebab with chicken and lamb shish, just so that he could sample the lamb shish.Now I must applaud Capital on its staff training. The service so far has been impeccable. Some Turkish restaurants go #OTT, constantly checking if everything is ok, they put @nandosuk to shame. On the other hand, some Turkish restaurants only care about flipping tables. They just want you to sit, order, eat, pay and leave. No time for pleasantries, let alone making up new combinations that aren’t on the menu!

The chicken shish was well seasoned. It had awesome flavour and oh so tender! This was amongst the best Turkish chicken I have had since old skool @Mangal_Ocakbasi days!The Adana Kebab was also well seasoned. It had flavour but not awesome. Still nothing beats Mangal 1’s Adana, however, Capital’s attempt was not to be dismissed. If I wasn’t an Adana connoisseur my taste buds would probably be going into melt down, like the first time a toddler experiences a sugar rush, bouncing off the walls. But I know my Adanas from my Urfas (they are cousins, google it, my Turkish peeps will know), and Capital’s Adana is just missing that little something.

What is Adana? Adana kebabı’ (pronounced ah-DAH’-nah keh-BOB’-uh) is the signature dish named after one of Turkey’s most famous “kebab cities,” Adana. ‘Adana’ kebab is made with ground beef or a mixture of ground beef and lamb that’s kneaded together with onion, garlic, and Turkish spices, then packed by hand around large, flat metal skewers. Once you have it, you will forget Doner meat ever existed like we have forgotten about black cabs since Uber came on the scene.

TONGO (aka Sweet Tooth): Looking forward to tonight’s visit after the debacle of the last pretender visit at #Antepliler we arrive and the place looks much nicer than I remember. The makeover works! For a Monday evening it was fairly busy.

Perusing the menu they had lots of desirable options, I was spoilt for choice! What stuck out for me though, was that they had various combination option dishes BUT the mixed grill didn’t have lamb ribs or chops in it! Like whaaaaaatttttt?!?! Capital what are you thinking? This made my decision way harder!

I asked the waitress if there was a full mixed grill with everything included but alas there wasn’t. She suggested that I should order the mixed chops which was lamb ribs & lamb chops only, and Mr. whyte order the mixed kebab (lamb & chicken shish and adana) and we share them. Mr. Whyte wasn’t having any of it, he wanted his chicken shish and signature adana to himself!! Fair enough! We compromised that we’d order as suggested and I’d swipe his lamb shish when it came. We even got to choose our side… rice obviously, none of that bulgur wheat stuff #pleaseandthanks

The food arrived and it was a fairly generous portion, 2 chops and 6 or 7 ribs. My favourite Turkish dish is lamb ribs and is generally my statutory order. These ribs were definitely a good choice as they had a nice flavour, were seasoned well and were quite meaty. Not the best ribs I’ve had in a Turkish restaurant but a valiant effort.

The chops were a good accompaniment as they were also tasty with little fat but not as nice as the ribs, for me. Oh yeah, let’s not forget my “newly acquired” lamb shish… Nice and tender, a welcome extra (in regards to getting a bigger quantity of food) but basically tasted like the lamb chops without the bone or fat.

I must give a special mention to the salad. Very well presented, fresh, plentiful, with a good combination of ingredients and the dressing had a pleasant piquant taste. A great example of how to do salad!

Although I wouldn’t class it as my personal top place to come, I would definitely attend here again.

SERVICE: We can’t state if it’s just the waitress we had or all staff but the service was exemplary. Attentive staff, timely with checking in on us and the food arrived quickly. You didn’t feel abandoned, or that overbearing feeling or like they can’t wait to get rid of you. Who knows if it would be maintained when the restaurant is full but if our waitress is anything to go by, you will want to tip the staff here when you visit!! Keep it up #CapitalRestaurant

OVERALL: Capital Restaurant are a good entry in the running for Best Turkish Restaurant in London. Tasty food, generous portions, reasonably priced and exemplary service… hard to go wrong really! A good all rounder, they are better than the average but something missing to be #limousine level. Not sure if it is the Best Turkish Restaurant as yet as we are still to visit some others in the list but definitely a contender.SCORE: 4 out of 6 man dems.