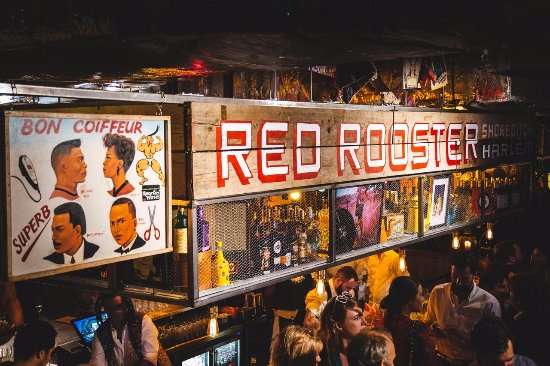 Pepper Man asked the lads who wanted to go to Harlem for a review of a new restaurant. Cheese Lover and The Manager immediately started packing their suitcases. MDVF has gone international, we have made it! But something was fishy when Pepper Man told us to meet him on Old Street instead of at Heathrow Airport. Maybe pre-drinks before heading off to the airport? So we followed Pepper Man into a place called @Redrooster, headed downstairs and took our seats.

We opened the menu and read “Harlem Meets Shoreditch”. But wait, is this what Pepper Man meant by going to Harlem? Cheese Lover and The Manager almost threw the menu in his head like a frisbee!

We all explored the menu and gulped at the prices. “If this is some bland chicken like we have experienced at other restaurants Pepper Man will be sacked on the spot!”, berated The Manager. The menu was a well thought out fusion of soul food and European dishes, very interesting and not too many options. The Man Dem were intrigued, counted down the days to pay day and got to ordering starters and mains with excitement. No dessert because #NottinghillCarnival is around the corner and Man Dem need to fit into our costumes!

Was ordering two courses going to be a costly mistake, should we have just played safe and ordered a main with water? You know like an Arsenal fan who pays the highest season ticket prices, expecting to win the #Premierleague, but at the end of yet another expensive season, ends up with just another FA Cup! Or would #Redrooster wow the Man Dem; like how Chelsea did last season, and steamroll over all of the competition to claim the top prize as the go to place for Soul Food and proper fried chicken in London?

FOOD:
For  starters we had chicken and waffles, which came with some interesting augments on the traditional dish; this is listed as a starter but the portion size was generous. The dish consisted of a boneless piece of what we think was chicken breast, complimented by waffles and a light drizzle of maple syrup.

At first we thought the waffles were burnt, but on taste the waffle batter had obviously been seasoned, which led to the colour looking more brown than golden. The waffles were light and full of flavour, this easily could be a main dish!

Now the chicken! All we can say is proof is in the taste! But we know you all want more of a description than that! So, the chicken seemed to be of a high grade, meaning you could actually taste that it was chicken, the coating was amazing, fried to a crisp with a vast array of spices, which almost gave the chicken even more flavour. The chicken was most definitely fresh, none of this pre-cooking in water crap that some other establishments try to pull off (check out some of our previous reviews of fried chicken restaurants). In our opinion the chicken and waffles are a reason to visit #RedRooster by themselves!

Pepper Man asked the waiter to recommend a dish (he loves taking risks!). The waiter suggested the “jerk pork & shrimp hot rice”. Just take a second to think about that…bet it makes your mouth salivate as you think about it and repeat the description in your head. Go on say it again “JERK PORK & SHRIMP HOT RICE” (Is your belly hungry now?). The rice has pineapple in it which is a great compliment to the pork flavour. The pork was a very small boneless rib which was slightly disappointing as it tasted so good, it just wasn’t enough to satisfy Pepper Man’s greed. However, it was sweet, juicy and fell apart in your mouth, so tender! The shrimp was huge and delicious and comes in two pieces. It was cooked to perfection.

Cheese Lover: I went for the THE LENOX SMASH BURGER, double beef, onion jam, cheddar (of course), chili aioli. Wait ‘chili’? I am not a chili fan but the waiter stated it is not overpowering so I agreed to let it stay.

For £17 this burger best be better than @pattyandbun (my current favourite burger)!

On arrival the burger looked sexy; the onion jam was tantalizingly dripping down the burger, giving me the eye, seducing me in for the first bite.

I went for first base and took a small bite. The combination of flavours just worked. This was one of the tastiest burgers I have come across. I will have to start experimenting with chili sauce now when I next go to #Mangal (Arcola Street branch).

This was almost the perfect first date; the only let down was the bun. If the bun was brioche I would have ended my relationship with #pattyandbun and proposed to The Lenox Smash Burger on the spot. @marcuscooks could have conducted the ceremony whilst I made my vows. “I, Cheese Lover, take you, The Lenox Smash Burger, to have and to hold from this day forward, for better, for worse, for richer, for poorer (I will definitely be poorer lol), in sickness and health, until death do us part.”

The Manager: I’m not gonna lie I was in a chicken mood after the chicken and waffles, I was thinking to myself maybe the “Fried Yard Bird” was the one for me? However, some of the condiments that accompany the dish were new to me; also beans with chicken! What nonsense was this, but I thought let’s throw caution to the wind and dive into it like a two footed tackle from Eric Cantona when Man United played Crystal Palace!

There is always this expectation that no restaurant in the UK could ever match the level of Fried chicken that is produced from the South, not London, America, no not that far down the world map! I mean Atlanta, Tennessee and them places. In this instance I can safely dispel that myth. The dish arrived fresh, piping hot, with a compliment of sauces and beans, which is where I started.

In the UK we call them runner beans, boring huh? Not these, I might get this wrong but they seemed to be lightly boiled (blanched), then lightly pan fried in garlic and salt, meaning you were able to taste the greens, but it wasn’t eurrrgh like the boiled veg I used to get for school dinners at Stamford Hill Primary. The Garlic and Salt worked perfectly. Now to combo the beans with the chicken! WAIT! Let’s give the Bird some respect and deal with it separately first!

The pieces of chicken given were Leg and Thigh, both attached. Personally I would have preferred a breast piece of chicken, as they say Breast is best!

Regardless you got two in the portion, as I cut into the chicken there was NO oil running out, always a good sign that the chicken would not be sloppy, and swimming in oil like other chicken outlets. The coating was almost bread crumb like, it seems the chef here had sided away from the traditional batter, which in some restaurants’ cases is an anti climax.

In previous spots we have been to there has been more batter than chicken!!! (We have another review talking about the poor method of cooking chicken coming soon!) The taste surprised me, the grade of chicken again was of a high standard and remained consistent with the starter, this I could tell via the taste and texture. The coating was crispy and held together well and tasted fantastic. So fantastic that you want to pretend you are eating alone, abandon the knife and fork, pick up the chicken and simply throw your hands to it? Well it was that level of fantastic!

Unfortunately due to my excitement I didn’t taste the chicken with some of the sides, most notably Chicken Shake, or the Hot Honey! I know I’ve failed you all! I will just have to go BACK and do it ALLLLLL again!

SERVICE:
The service was top notch, attentive, knowledgeable and patient. This felt more like an experience, not just a restaurant trying to turn over tables as quickly as possible. We soon forgot the menu prices as we absorbed ourselves into the ambiance with the thought provoking decor and an array of  fascinating pictures. Overall the experience was well worth the money.

To further enhance our experience, Red Rooster owner #marcuscooks sauntered over to our table for a chat. Marcus told us about his background, menu influences and why he decided to set up a restaurant in #Shoreditch. The Man Dem do love a back story. Somehow we then moved on to #football and the conversation suddenly got serious. Marcus is a massive #Arsenal fan and wants ‘#Wengerout’. Another two years to go lol!

OVERALL:
Just like how most people thought Arsenal would flop against Chelsea in the FA Cup Final, we braced ourselves to be disappointed by Red Rooster based on past history visiting restaurants who also serve fried chicken. However, Arsenal ended up winners and blowing away Chelsea. Red Rooster most definitely blew away other similar restaurants we have reviewed with its service and food; and more than matched one of the MDVF all time favourite restaurants @Dirtyboneslondon. These two are a close call.

Man Dem V Food highly recommends a visit to Red Rooster. Eating or even just having drinking with a few nibbles upstairs is a must! There are also themed days such as ‘Sunday Gospel Brunch’. Red Rooster is suitable to impress on date or a catch up with friends.