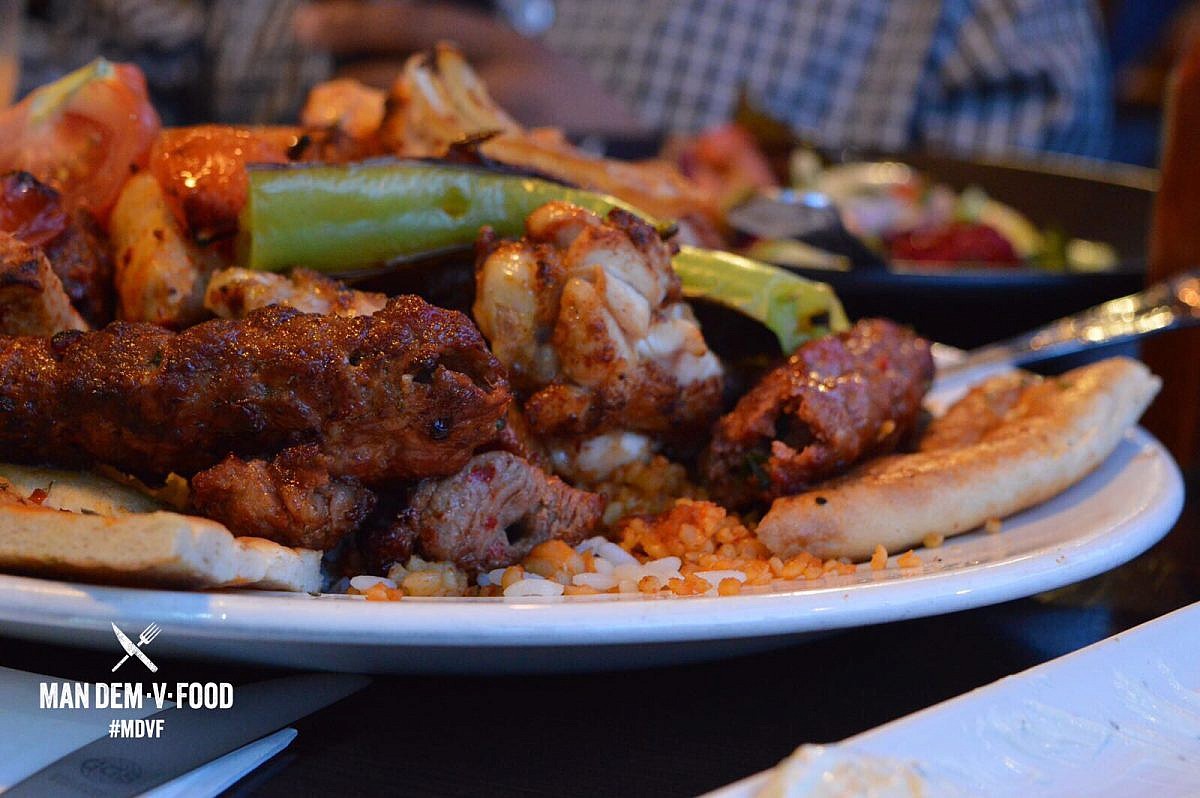 One of those one away #MDVF impromptu linkups on a Tuesday evening… No plan so no reservation… Man Dem are hungry but what to eat?! The Manager says “Hold on Man Dem, it’s Tuesday… what else?!?”, “TURKISH!!” the rest of us reply in unison like a well rehearsed choir.

Pepper Man then decided to pipe up with “I’m down but Turkish restaurants to me are like McDonald’s!” You could virtually hear the rest of the man dem’s jaws hit the floor! “WHAAATTTTTT?!?!” the rest of us exclaimed simultaneously… “Hear me out before you start cussing. What I mean by that is, no matter where you are in the world, McDonald’s always tastes exactly the same. No particular branch stands out. That’s my feelings with Turkish restaurants, they all taste the same in North, South and East London. Does West London have Turkish restaurants? (Tell us about any Turkish restaurants in West) I like the food but I could never consider any to be the #bestturkishrestaurant in London. I’ve never been disappointed but the one in South did come close though lol.”

And this is how #TurkishTuesdays morphed into #MDVF being on the hunt to find London’s ‘Best Turkish Restaurant’. Can we find any other Champion’s League restaurants on the same level as #Gokyuzu #Kervans #Mangal #Capital instead of your average Europa league standard of Turkish restaurants.

We will also be exploring what makes the Champion’s League Turkish restaurants stand out from the others. The flavour of food, the free bread quality, cost, portion sizes and the service.

Where to continue this hunt? Green Lanes in North London of course, the Mecca of Turkish restaurants!

But which to choose… there’s so many to choose from! One of the man dem dives straight onto the #iPhone7 and Google’s ‘Best Turkish restaurants’ for the area. Selale Restaurant pops up in the ranking results with positive reviews. A quick scan of the website reveals Selale was the winner of best British Kebab Award 2015. Man Dem definitely have to try this!

Will Selale qualify for the Champions League or end up in the Europa League. Will Selale be a contender for London’s Best Turkish Restaurant?

FOOD: We ordered mixed grills, or as they call it, the Selale Special. Each mixed grill comes with lamb ribs, chicken wings, lamb kofte, chicken and lamb doner (which Sweet Tooth and Pepper Man swapped for lamb beyti), chicken shish and lamb shish! (Is your mouth watering yet?) It’s safe to say if you are a Vegan this probably isn’t the place for you. The meal was served with white plain rice, red bulgur wheat and salad.

In most Turkish restaurants except @kervans the lamb and chicken shish lack flavour, and in Selale’s case it was the same. The meat was tender and well cooked but it just didn’t have that finish, you know like how @UsainBolt blasts away the competition in the last 50 meters of the 100m sprint. These meats were more like Justin Gatlin… and, ummm, where did he finish again?

However, the lack of flavour was covered up by other parts of the mixed grill, similar to a boy band which has one member in the background who’s dancing is average.

Now the lamb ribs, lamb kofte and beyti. The ribs were lean, not too fatty and pretty much standard in taste compared to other Turkish restaurants. That’s not a bad thing, but, (according to The Manager) what made the difference was the chilli sauce. He says, “When you lather that bad boy on it, it changes the game!” However, if you can’t handle the spice, the lemon juice on the lamb also gives a nice taste sensation.

We still can’t find a lamb kofte to match the flavour of Mangal’s, (Arcola Street, E8). Selale’s effort was middle of the road. The kofte and beyti were very similar in taste being that they were both minced lamb on a skewer, but the beyti just edged it as it had more flavour due to the larger amount of ever so visible herbs within it.

The doner wasn’t the more common type that most people have come to know but the type where it is layered cuts of the meat piled on top of each other. The doner was, average, we definitely prefer the “original” type. Don’t get us wrong, it works but not the reason why we would return.

For mixed grills, the rice and bulgur wheat are just plate fillers to make your plate look buff, @Kervans are the worst for this trick. Selale didn’t fill the plate too much, but they all taste the same and nobody really cares about them. Reminds us of them songs nobody cares about on albums that have just been added to make up the numbers so you don’t pay £12.99 for only the 3-4 good songs.

The bread and mixture of salads that is standard when you come to these establishments was again, on point! One thing we will say is the bread that came on the platter had a completely different taste to the bread that’s served as an entree (see them posh words there lol). The bread on the platter was seasoned or flavoured with something and it wasn’t particularly nice. Tasted like it was stale, yet soft garlic bread but instead of garlic they used some other herb like oregano or thyme.

Last but not least, the chicken wings! Yes exclamation! Probably the best we have tasted EVER from a Turkish restaurant! The pieces were so well seasoned to the point that writing this sitting on a Jubilee line tube to Stratford at 8.05am the thought of eating them gives that feeling like a fiend wanting to be back there for their next hit.

The chicken wings were seasoned so well they made you do that thing where you pause to look at them to make sure you’re not dreaming before taking your next bite. Lol They tasted amazing, top notch, higher level, orgasmic even… definitely champion’s league! We agreed we would actually consider revisiting just to have the chicken wings again!

SERVICE: The service was amazing! Staff were very attentive, despite it being bigger than the size of Gökyüzü, and went that extra meter. We can’t say mile because that would be Michelin star level service, but it was swift and efficient, not at any point did we have to signal a waiter or waitress for anything. As soon as eyes looked up from the plate someone was there to ask if you were ok or needed something, and not in an overbearing way. They got the balance just right.

The staff were so polite, knew about everything on the menu and answered all questions asked without hesitation. Even when we were awkward and asked to substitute items from the mix grill (as we often request) it wasn’t an issue, unlike other establishments we’ve visited. They were more than happy to oblige. And the little extras like opening and closing the main door made Man Dem feel like we were in Mayfair. Top marks for this place.

OVERALL: Once again the Turkish never failed. In regards to portion size, it was a feast for kings. We tucked in until we couldn’t eat anymore… bellies were niiiicceeee!

However, Pepper Man was right (for once!) the majority of the food was not much different to any other Turkish we’ve visited. Only the chicken wings really stood out, but on the whole, pretty average.

The biggest difference between this restaurant and other Turkish restaurants was the service. ROUND OF APPLAUSE! These people know how to treat customers!

Overall, although relatively new to Green Lanes, Selale makes it into the Europa League, but we can see it creeping into the Champions League if the lamb seasoning is improved.