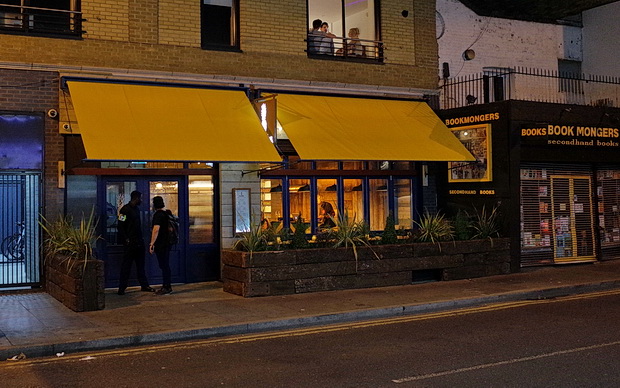 So, in preparation for a direct challenge to “Pepper Man” from the guys over at @whitemencantjerk as “The Manager” it was my duty to provide our #MDVF contender with some training, and where better than the famous @therumkitchen based in trendy central #Brixton Cold Harbour Lane to be exact. A little different to how we remember Brixton, but hey we are only here for the food.

In this neck of the woods Wednesdays are dubbed “Wings Wednesday”. In a nut shell, £20 gets you a Red Stripe #beer, a portion of #fries and unlimited chicken wings. I REPEAT! #UNLIMITED #CHICKEN #WINGS!

Yes this is a MDVF training exercise, what kind of manager would I be if I didn’t coach and correct my team to success!

Pepper Man and I walk in and we’re seated quickly, probably because the place had only opened half an hour before we arrived. Inside was warming nicely, the place already had over 20 people seated so make sure you book a table. #MDVFtip

As this is one-to-one coaching there will only be 2 opinions on the MDVF ‘Wing Wednesday” experience.

Pepper Man: We didn’t realise it was happy hour so that was a bonus and we got our orders in straight away. I had a Tingwray (wray & nephew rum, blue curacao, ting and lime juice) and The Manager had Wreggaemeister (wray & nephew rum, jagermeister, lime and passion fruit juice). We asked for the #Wingsday deal (I mean why else were we there?) and didn’t bother look at anything else on the menu!

Don’t worry, we will be back to make a full #blog and taste the other bits and bobs at a later date, what do you think we are… #cheapskates who only go cinema on #MeerkatMovie days

Round 1, the first tray of wings came within 5 minutes of ordering. Impressive! The wings got boxed off quick fast. #NoLongTing Now these were authentic Caribbean chicken wings. Not like the tasteless wings we have sampled at other reggae reggae rastarants

…Anyway these wings were quality, no complaints.

I went quiet all of a sudden. “Wha gwarn…is man crying due to the pepper on the wings??? (Said The Manager) “They’re not even hot! Are you really drinking rum cocktails to try and dilute the fire in your mouth?” (The manager likes to wind people up

So far this training is an #epicfail! Round one done!

On to round 2…These wings took about 10 minutes to come which was alright for me as it gave more time for my mouth to cool down, get my breath back, wipe the sweat from my brow, look at myself in my #iPhone (selfie view) and say “Man up kid! I ain’t going out like no sucka #wordtoMrT I can do this!”

We tucked into the second batch of wings and once again they tasted great. Finger licking good #noKFC. I could manage the very slight spice on this batch and began munching through them like I’m the Cookie Monster eating cookies. Pieces of chicken were all over my face like crumbs!

The wings were well seasoned and full of flavour. Round 2 done! I think this is a pass.

Now for round 3… 15-20mins wait. The taste of these wings were different, but I was on a roll and continued to chow down until we were left with another mountain of bones. This round was another pass

? I can handle this @WMCJ challenge #calm

Round 4 was when I remembered I was in a Caribbean restaurant due to the length of time the wings took to arrive. It must have taken about 30 minutes. During which time not one member of staff came to take away the mountain of bones left over from round 3, or try sell us more drinks.

The Manager and I were fuming at the wait, it messed up our flow! It got to the point we lost motivation to eat anymore.

Our eating swagger was crushed like when La La Lands cast members were on stage hyping themselves up for their acceptance speeches when they thought they had won an oscar!

When a waiter did turn up he actually had round 4’s tray of wings but by this point we just wanted the bill and requested the wings to be packed up in a takeaway box so we could leave.

The bill came… wait, what… £66?! #WTF!! We messed up. One of us should have ordered a completely different food option while the other chose the unlimited wings. #MDVFtip

We basically got charged twice for the wings. The fries were £3.50 (and nowhere near enough so we had to buy extra) and the happy hour cocktails were not buy one get one free, it meant one cocktail was £5 and not the normal £8 (Hmmmm

). Lessoned learned but I reckon I have passed this training exercise and proved I can handle pepper…

The Manager: Soooooo, unlimited wings, even as I write this my heart skips a beat. Even though I had an ulterior motive for bringing Pepper Man here (to bun up his mouth to make it numb for the White Men Can’t Jerk Pepper Sauce Challenge) I also was intrigued to have my own Rum Kitchen experience after hearing the odd comment from other #foodies, and I wanted to sample these wings. Historically for me the best chicken wings I have tasted had been either from a #Turkish restaurant, or from @clutchchicken (I need to revisit that place. Read review), but we digress.

The décor in the place was interesting, where we sat there were numerous bottles of rum locked away in a cage, a little disturbing that one of the bottles had a picture of Ron Jeremy on it (Google the name if you are unsure).

So order placed, Wing Wednesday, and that all important Red Stripe which I an I love! Ya si me! (Urban dictionary if you’re unsure).

The first batch arrived, and I was impressed. These wings were well seasoned, and well cooked, it seemed as if they were fried first, then steamed, possibly with jerk seasoning and then covered in their own jerk sauce, none the less they tasted heavy! The pepper ratio was on point, none of that lightweight jerk seasoning you get in other places. At that point I looked up at Pepper Man, man was struggling already and as a good manager would do, I said “They’re not even hot! Nyam (eat) some more! This is training for the #WMCJ challenge, you think they gonna take it easy on you? The video said they were gonna take your head off!” Ha Ha!

The texture of the wings were good, the grade of chicken was high also, and the wings didn’t taste like they were soaked in water before hand. (Shouts to @pengestmunch if you haven’t been here you should try these lots chicken). Round 1 done, off to round 2.

The second batch arrived swiftly, bones cleared, and we were ready to munch again. For me something was different here, I couldn’t quite put my finger on it, were these cooked differently? Were they made with a different seasoning? Did a different chef make them? Ahhhh maybe it was just me. In essence, the second batch were also tasty, I could taste the jerk seasoning and yes they were of a high standard.

Right, on to the third round! Something wasn’t right. Less jerk sauce? DEFINITELY! Wings cooked in another different style? DEFINITELY! Did it seem as if they didn’t care about us after the second batch? In my view, MOST DEFINITELY!! Was I disappointed? 100%! Maybe the 4th batch would make up for it…

5 mins pass, 10 mins pass, 20 mins pass, 34 mins passed (yes I counted) and still no rahtid wings! Was this a plan by #therumkitchen to see if we would ask for the bill and leave, or was the service just that bad? Were we forgotten about? Hmmmm, who knows!

Finally the fourth batch of wings arrived… What started off so well, for me, ended so badly. After such a long wait man don’t even wanna eat them again “Pack them up star! Send for the bill”

I feel you got fresh wings made with love in rounds 1 and 2. However the more rounds you sit through… actually here’s how I’d sum it up….

Round 2 wings were Rhianna when she did Umbrella – quirky tune but it worked!

Round 3 wings were like Nikki Minaj after being duppied by Remi Ma.

Round 4 wings were Cardi B’s teeth (before surgery) harsh I know, but that’s how I felt.

As for Pepper Man’s training, I have failed as a manager!

See how many wings you can get through at http://www.therumkitchen.com/