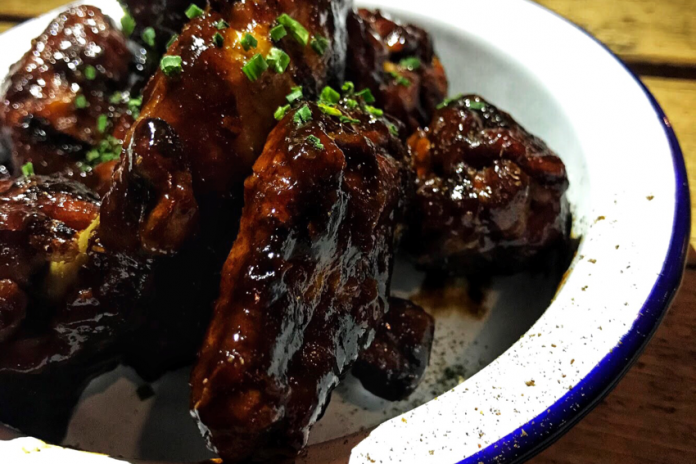 Speedie got the intel Randy’s Wings Bar is one of the best places to go for chicken wings in London. That’s a big statement to make, one the Man Dem had to investigate! What better place to start Man Dem V Food’s newest quest to find the ‘Best Wings in London’.

Speedie and Whyte decided to kick things off at Randy’s Olympic Park branch.

Speedie: As soon as I walked in I was greeted and escorted to our table. There were only 2 other people in there but it was nice to be welcomed as soon as you arrive.

I was offered a drink on the happy hour even though it had actually finished. Happy hour is between 4-6pm and is for beer and spirits only. It was a school night and I didn’t want to go hard, so I ordered a Tropical Mojito cocktail instead. Didn’t taste tropical at all but it was hella strong. TIPSY!

I ordered the Gangnam Korean inspired wings and bacon dust fries. I’ve had Korean wings before at @beer_and_buns giving me something to compare Randy’s with.

When the wings arrived I counted 9 meaty chicken pieces. Thats a very generous portion compared to other places. My eyes lit up like a rabbit in headlights. Things are looking good for this place so far…

My first bite of Gangnam wings was a pleasant one. It was dripping in sauce and it had a little kick to it. They weren’t spicy but tangy. After 4 of them i was done. The tangy after taste was starting to grind on me. I had to keep taking large gulps of my not so Tropical Mojito to get rid of the taste.

It was exactly the same with the Casablanca wings Whyte ordered. Not sure why he was so intent on ordering this style but wish he went for the BBQ instead. I mean the Casablanca wings did start off positive, but then after consuming a couple, the tangy sauce was just unbearable. This time the sauce was a lot more intense.

The bacon dust fries in my view aren’t worth it. You can’t taste the bacon flavour because they have drowned the fries in mayonnaise. I didn’t even finish them. Way too much mayo for my liking.

Overall the wings were ok, definitely not horrible, I just know I won’t be coming back here anytime soon unless I’m really craving wings and i want to try the other wings on the menu.

Whyte: After 30 minutes rambling around Hackney Wick and that big ‘Here East’ building in the Olympic Park (what is in there?), crossing over bridges I never knew existed and traipsing along dark canals, I met Speedie at Randy’s Wing Bar, confused as to why he didn’t book the Aldgate branch. In my confused state I browsed the menu and price list. 2 man, 5 different wings, this could be the most expensive review ever!

My first bite was delectable, these were the Gangnam Korean wings. The chicken was so succulent, easily coming off the bone, with a flavour of its own. This is how you fry chicken! Whyte

Honey is my new thing, my sugar replacement. I have it with everything possible, toast, oats, tea. When I read the Casablanca wings were glazed in honey I immediately starting negotiating #BREXIT style which of the 5 types of chicken wings we were going to order. Learning from Theresa May’s disastrous tactics, I gave Speedie first refusal and then maneuvered towards the honey avoiding all talk of open borders and letting everyone in, which in this case would mean ordering 5 different types of wings. The way how my bank account is set up, I only care about the honey! Deal secured! Honey wings on their way.

My first bite was delectable, these were the Gangnam Korean wings. The chicken was so succulent, easily coming off the bone, with a flavour of its own. This is how you fry chicken!

On to the sauce. Great flavour, sweet and just the right amount of spice to give it some kick. At first a strong kick but not overpowering.

After demolishing two Korean wings I moved onto my Casablanca honey wings.

This batch of sauce was thicker, darker and sticky with a strong but not so pleasant after taste due the mint dressing.

It took me two wings to decide if I was a fan. The mint was too much. After the sweet honey, you are left with a mint taste. Not a fan!

The Gangnam wings were definitely the better of the two but not by far. Maybe the portions were too big, but the more I ate, the less I wanted. Whereas when the sauce is on point I want more.

Randy’s is not the best wings place, nor is it the worst. It will probably end up somewhere in the middle of the pack.