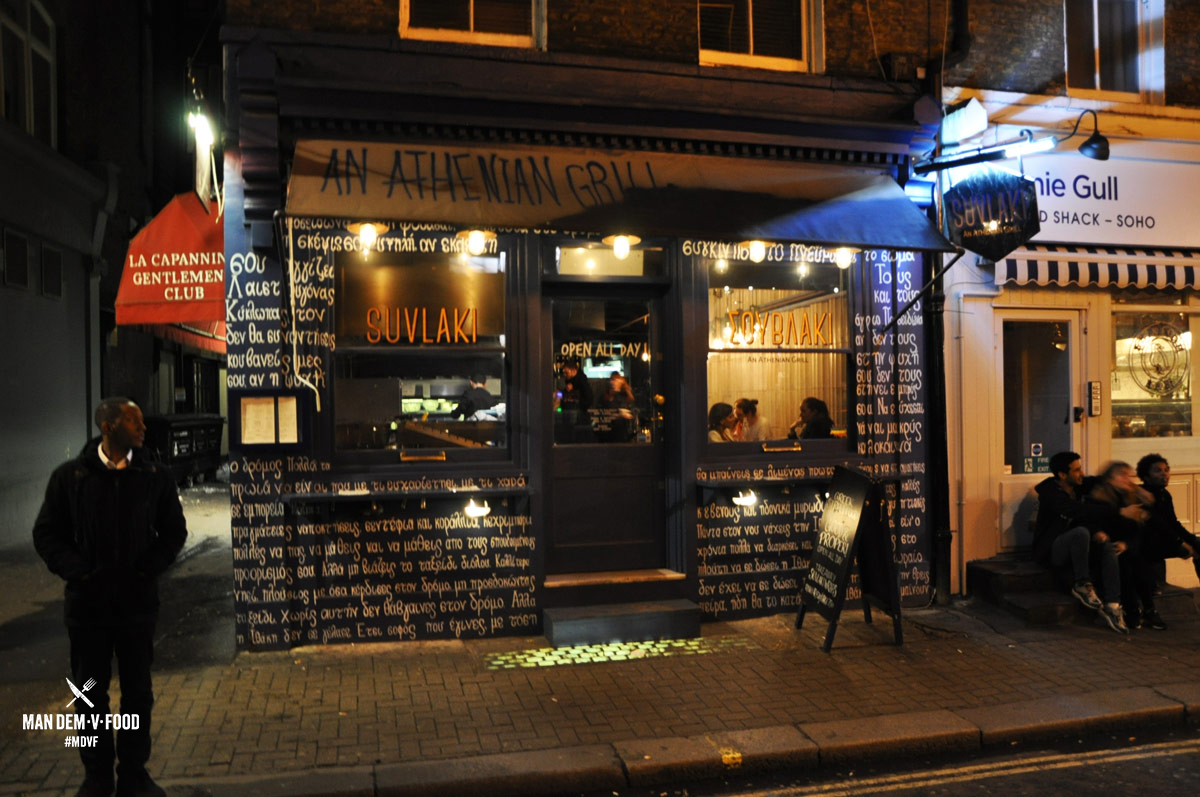 You know those friends who love to experiment with their food. You go to a #restaurant renowned for its #burgers and they order a #hotdog just to be different (true #MDVF story).

Well this is how Pepper Man got his name. This guy loves experimenting, especially with his hot sauce tolerance levels. My man can’t handle spicy food AT ALL, but he still chooses to order the hottest dishes which have the most chilli’s or the hottest sauce, knowing he will be begging for ice water shortly afterwards!

So when the MDVF lads were discussing which restaurant to hit next and Pepper Man jumped up and said “Greek food” we asked “Why Greek?” Pepper Man’s response was;

“I dunno its something different, we have never done Greek before, let’s experiment, not every Tuesday Turkish”.

Does #Greek food have pepper in it? Once again Pepper Man is taking risks… And so the ‘Greek Experiment’ began… Welcome to @suvlakiLondon 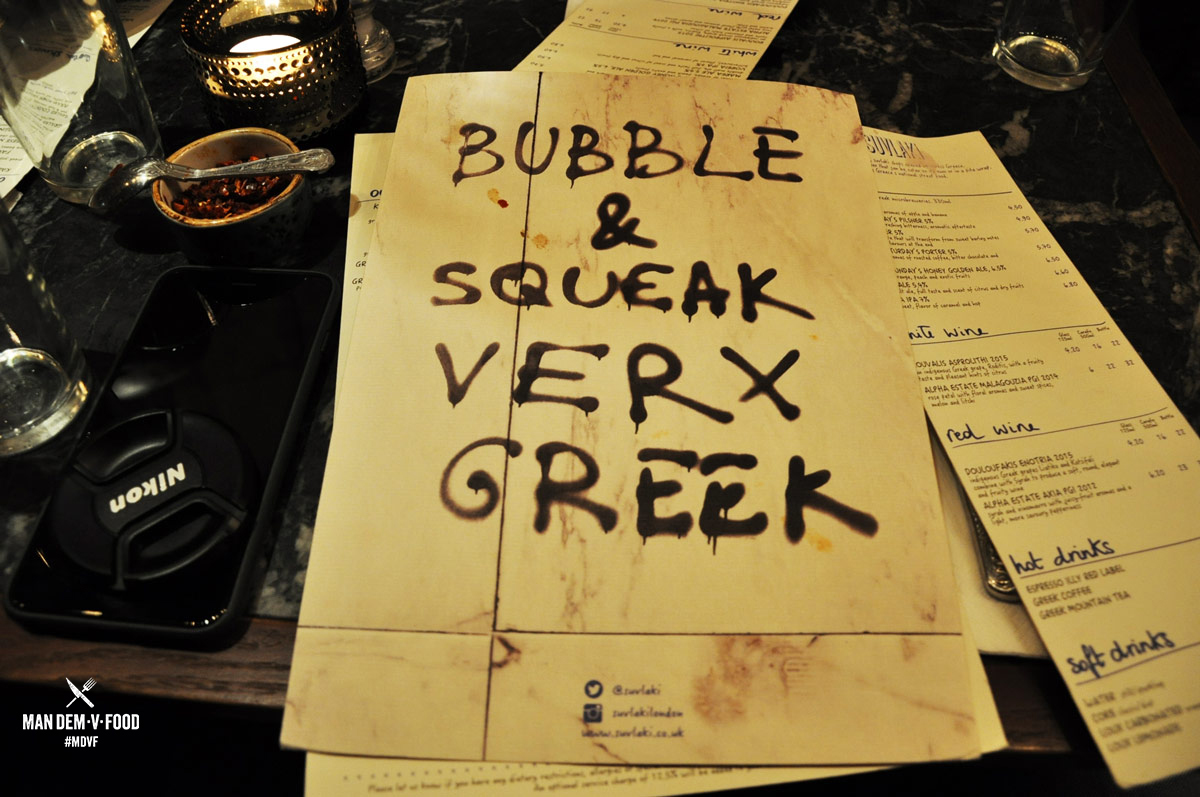 We perused the menu and didn’t even bother with starters, just went straight in with the mains. Pepperman went for the Suvlaki chops & chips. On the menu it says you get 3 spicy #lamb chops with oregano chips, however when it came there were 4! Was that an accident or did they do that on purpose because they saw the bad man camera the photographer was rolling with?? Who gives a monkeys! Man got 4 chops instead of 3 innit! He was chuffed! He tucked in like a lion who hadn’t eaten in a week. Them chops were juicy and succulent, he quipped. They were kinda small but the taste definitely made up for it. He seriously considered ordering another 3 but didn’t clean up all his chips so waited patiently for dessert instead.

Sweet Tooth, The Photographer and Cheese Lover all went for the Suvlaki Skewers. These came as a choice of 3 out of the 5 flavours available. They chose a combination of the pork in honey glaze, chicken thighs, lamb mince and wild boar sausage options between them. The other option being vegetarian.

If you ever saw the glee in Sweet Tooth’s face when his meal arrived… you would’ve thought he scored the winning goal in a world cup final! He attacked the skewers #nolongting tasting each skewer in turn and each “mmmm” got louder. His plate was properly clean when he was finished.

After the first bite The Photographer said, “this is authentic Greek, not Cypriot. You can tell as it’s seasoned with oregano whereas Cypriot more season with thyme” the rest of us were like “hear the expert though, someone’s been doing their research!”

Cheese Lover just went quiet, only opening his mouth to eat until we finally asked “what do you think bro?” His response..”Dare I say it… this kebab meat is better quality than my local Turkish!” and this guy loves Turkish!

The meat was cooked perfectly and seasoned very well. Tender, flavoursome and the herbs and spices complimented the meat exquisitely. The accompanying pitta bread  was warm and freshly baked from the oven, in a word, heavenly! 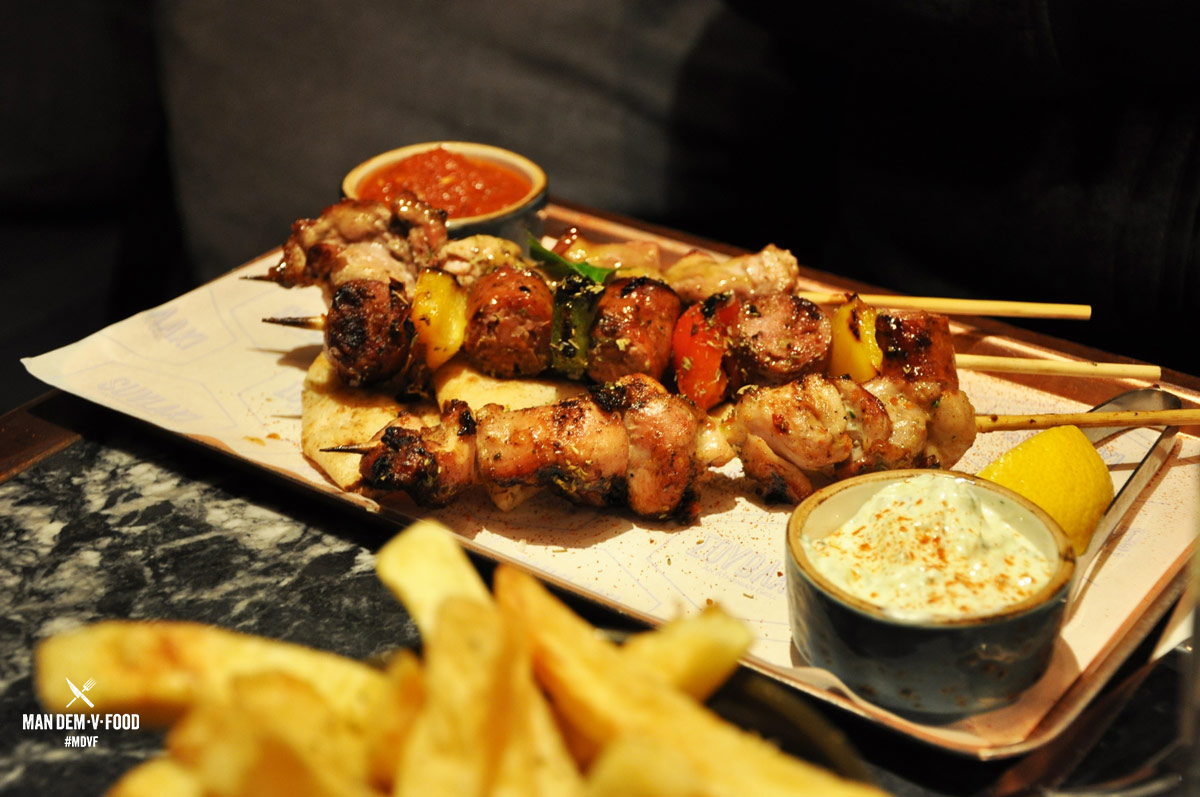 For dessert both Pepper Man and Sweet Tooth had the ‘Samos to Soho’ cheesecake. This wasn’t a traditional cheesecake but more a creamy dessert with a combination of Greek wild honey, candied ginger, citrus, meringue and something called “mastiha”. We asked the waiter what this was as we had no clue. He explained it is an extract of a tree native to Greece and assured us it was nice. We were basically sold a dream! When the dish came we were both like “urrrrgghh”. This was definitely not to either of our tastes.

Now we’re not ones to complain and make a scene in a restaurant so we politely asked the waiter can we change it for what Cheese Lover was gloating about having. This was the chocolate biscuit cake with kaimaki (ironically made with mastiha) ice cream instead of the homemade Greek coffee ice cream it is usually served with. The kaimaki ice cream is an authentic Greek dessert which was rich and creamy and complimented the chocolate biscuit perfectly. No wonder Cheese Lover was so quiet. Man was indulging in the sweet dessert Pepper Man and Sweet Tooth eagerly desired. Sweet Tooth and Pepper Man were very happy with their second choice. Amazing!

We walked into the restaurant and were quite surprised how small it is. We would definitely recommend booking if you’re going to go Thursday – Sunday as we presume those would be their busiest days. Very professional and welcoming from the moment we stepped through the door to the moment we shut it behind us. The staff were knowledgeable, polite and nothing was too much trouble. The restaurant had an intimate, almost homely feel possibly because of the size, but we’d say mainly from the aura of the place. It has an authentic robata-style grill and traditional oven that is right there as you walk in, basically the kitchen is in full view which is always a nice touch. We cannot fault the staff at all, even the chef was willing to have a chat with us whilst cooking up a storm!

A quaint space ideal for a quick catch up between friends and intimate enough for date night too. (#Valentinesday soon come!). Considering Suvlaki is in the middle of west end the price is amazingly value for money, especially with the quality you’re getting. Kudos to Pepper Man and his experimenting ways, he found a real gem of a restaurant. A good all rounder, it’s very hard to go wrong at #Suvlaki