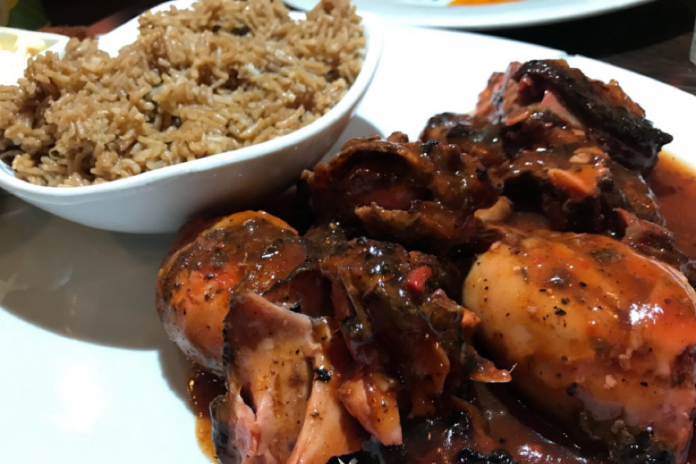 Sunday dinner at your Mum’s, talking about food as you do, when she makes the statement “the best Caribbean restaurant I’ve been to is on Stroud Green Road, it’s called LuLu’s” I’m like, “The best?!? Are you sure?!?” She cut her eye as she kissed her teet’!
To test Rain’s mum’s taste buds we sent along Tongo and Rain to report back if Lulu’s was the best.

The way Lulu’s was going to get marked down based on this sauce, until I stopped eating with my eyes and actually took a bite! Rain

RAIN (aka The Manager): A week later we are here! Sat in LuLu’s, admittedly not much to look at from the outside, but on my mums recommendation it must be the food! I decided to keep it simple and ordered #JerkRice, to my surprise it wasn’t on the menu and the waiter looked at me funny! (I’m joking I never ordered Jerk Rice, cool your jets!).I actually ordered the baby back ribs to start, and then the staple Jerk Chicken which comes with Rice, plantain (pronounced “plaan~tin”) and coleslaw!

It took a while for the waiter to take our order, however, when he came, in conversation, we found out the restaurant had been here for 4 years but some of you may of known it as Hummingbird. Anyway, the food arrived, presented well, compliments to the chef for her plating up. As we were in a hurry we had everything come at once, no time for the lay lay, we were hungry!

The ribs, we both commented, (well more so Tongo), as I was blinded by the food; that the sauce on the ribs which were labelled as being BBQ was just sweet chilli sauce, yeah the sauce you buy in a Chinese supermarket. Oi! The way Lulu’s was going to get marked down based on this sauce, until I stopped eating with my eyes and actually took a bite!

Have you ever eaten something where it tastes so good that time slows down and everything is moving slowly, the soca tunes that were playing in the background sounded like classical music and Tongo’s voice sounded like Barry whites due to it being so slow.

These were not jerk ribs, but the taste was insane! Seasoned well, cooked even better, not over cooked or dry, just right, I want to say perfect but! Yes BUT, the ribs didn’t have enough meat on them, one, two, three bites and they were done, unless you like the fatty bits and I don’t, as man like me is on a diet! But we move on.

The main was Jerk Chicken, Rice and Peas, coleslaw and fried plantain. I’ll start with the rice and peas, let me say straight off, I don’t like peas in rice, yeah what kinda Jamaican am I, I’ve heard it all before, but I just don’t like it KAPISH! But due to an error on my part when ordering, the peas was on my plate so I had to try it, and you know what I had to look twice at the kitchen to make sure my mum wasn’t in there cooking this stuff as it taste exactly like hers… ish! (Mum yours will always be better) The main thing was it looked like the chef used gungo peas rather than red kidney beans, definitely a winner but still not a fan.

Now the jerk, the bench mark I guess would be Rudie’s in Stoke Newington as they have a proper jerk pan / barrel and that’s the ONLY WAY GOOD JERK CHICKEN CAN BE COOKED! Normally Jerk Chicken comes with out any sauce, your choice whether to add, but at LuLu’s the chicken is bathed in this sauce. My issue or concern was, will I be able to taste the Jerk and more importantly the chicken? The sauce would be the only negative and the chicken (Half) which consisted of two legs and a thigh tasted really good, not mind blowing, but not like crap either.

Personally I prefer breast pieces of chicken to be jerked but this worked for me. However, the sauce should be kept on the side where you can either dip or add to chicken as you see fit. I always think when coming to Caribbean restaurants what would my Dad or Gran say? I think if they were to eat the food and finish it and not say anything that would mean it was good, but if they ate and left food on the plate you would definitely hear about it.

Finally, the plantain, cooked how I like it, some like it fried dry, I personally like them fried moist, almost soggy (don’t hate me). Overall it’s a place I would revisit, place I would take my parents and family the only issue would be the service, one person cannot manage 3 tables and do the take away element of the business. Away from that LuLu’s place is up there. We need more Caribbean restaurants at this level, good tasting food and good music.

TONGO (aka Sweet Tooth): When Rain posted the suggestion I paid it little attention and assumed it was on Green Lanes somewhere. He then posted the menu a few days later and my gosh, I wanted to try almost everything! I haven’t been this excited to visit a restaurant since the 1st time I visited a @benihanas way back in errmmmm 19… never mind! I was #gassed to say the least! The day arrives and as I am getting closer, something seems familiar but the penny still isn’t dropping… wait a minute! What the hell happened to Hummingbird?!

I enter and the decor is typical Caribbean reminiscent art painted over the walls, which adds to the atmosphere.  I am also met with the sweet sounds of #soca music playing… I like this place already!

I was running late and Rain looked livid when I arrived. I thought I was gonna get one of those disciplinary meetings there and then in the restaurant! Lucky for me that didn’t happen #phew A little small talk and we got to ordering. I opted to have a couple starters together as my main so I could sample more of the menu. This was a haarrrdddd decision but I finally decided on the Sticky Baby Baked Lamb Ribs and the jerk chicken and of course, fried plantain.

The first noticeable thing when the food arrived was that the food actually looked appetising and appealing to the eye, still leaving me looking forward to chowing down. The second thing was the portion sizes… are they sure these were starters? What this did highlight was the realisation that I forgot to order any accompaniments to go with all this meat #doh Oh well, I’m a carnivore anyway so pure meat is always welcome. Rain, however, took pity on me and we shared his rice & peas, but I’ll get to that later.

I started with the ribs. Described on the menu as “Slow cooked, smoked sweet Demerara homemade BBQ, sprinkled with plantain chips.” Imagine my dismay when upon closer inspection the sauce looked like Thai Sweet Chilli!! #Bruh You know when you’re in a fete getting the whine of your life then the DJ just stops the song n switches the song to one of a completely opposite tempo making it seem like you’ve lost all sense of rhythm in one swift millisecond?! Well that’s how I felt… I was deflated! I dubiously took a bite and how wrong was I, the mouthful of rib was sensational! That whine of my life just jumped in my mouth!! My mouth was now dancing a sweet, smokey, meaty mouthful of goodness! The sauce was definitely not Thai Sweet Chilli lol The added plantain chips to add an occasional crunch was a nice touch!

The jerk was a quarter piece for a starter… can’t argue with that! But wait, the sauce has that #ThaiSweetChilli look about it again #mate Don’t tell me they use the same sauce for the ribs on the jerk… they can’t, can they? Luckily, no they didn’t it was definitely different. I can’t put my finger on what that difference was but there definitely was one and it also tasted good! You could tell the jerk was “actual jerk” (scroll back to Rain’s post for reference) and not just thrown in the oven with some jerk seasoning and sauce. Not the best jerk I’ve had but would definitely order it again.

Oh yeah, lemme get back to those rice & peas! I’m not a rice & peas man, personally, I prefer plain rice or seasoned rice over rice & peas any day as I’m generally not a fan of peas / beans / pulses. But this was not my order, it was a gift and what a gift it was! This is one of the best rice & peas I’ve tasted EVER!! Maybe it’s because the rice to peas ratio was probably like 70/30 or even 80/20 I don’t know but basically there was hardly any peas in the dish but enough to warrant the name. The flavour and seasoning of the rice was sublime! I could actually eat a plate full of this with no other accompaniment, it was that good to me. The plantain I ordered was perfect for me. You could tell they were over-ripe prior to frying so were soft and sweet but weren’t greasy as can happen with plantain of that sort.

All round Lulu’s has been a winner for me. I am definitely coming back as I have been craving their food within hours of me leaving!

SERVICE: As mentioned by Rain earlier the service was slow to start but once served our waiter was polite, professional and friendly with good interaction and discussion. He was knowledgeable about the history of the establishment, which was a refreshing insight. The slow service might just be due to lack of staff that particular day as they definitely needed another member of staff to be present but we don’t know the setup so it could be something they need to address for all we know.