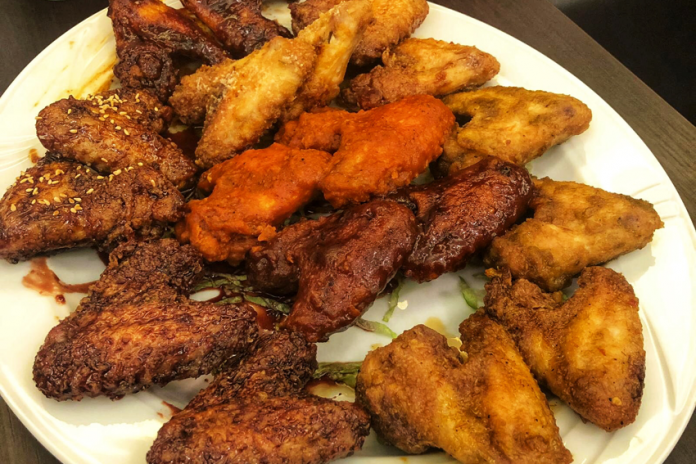 The @CaketailClub has been popping up on our social media feed for a while now displaying their new and original desserts. When we saw the wings they had on offer we decided it’s about time the mandem take that long journey across London Town to Hammersmith.

As you walk into this brightly lit establishment you’re greeted with a plethora of cakes in front of you. How can people walk past and not go in and buy one of their desserts? This place is heaven for man like Tongo (Sweet Tooth), however, we must stick to the plan! We’re here for the wings!

Out of all the places we’ve been to, this place has the largest variety of wings to choose from. Bear in mind this isn’t a traditional restaurant… It’s a dessert shop!

We had to be strategic with this one. There were 9 different flavours and several of them were similar in appearance.

We both looked at each other and thought, how are we going to be able to tell which is which? Hmmm… We had to be strategic with this. We decided to write the flavours down in our phones and then eat them in order along with our thoughts next to each one.

With phones in hand prepped and ready, once the list was complete we decided to start with our presumed worst, first! Check out our opinions below… 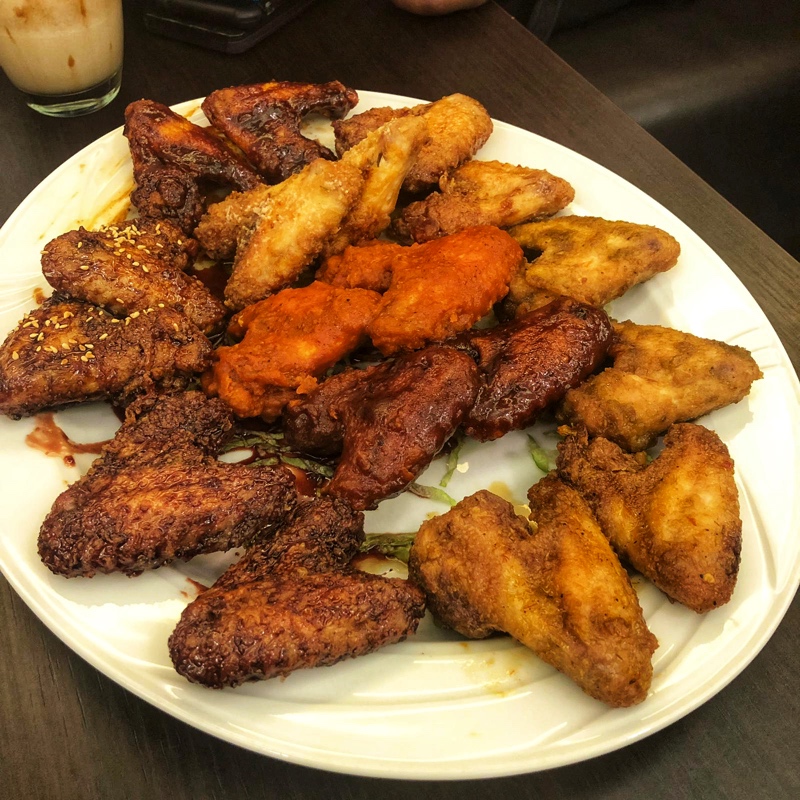 1. Garlic Parmesan
SPEEDIE: I’ve said this many times before… chicken and cheese don’t make sense! I’m not feeling this one at all. The chicken’s well cooked, but the Parmesan aftertaste… mate! I’m not on it!
TONGO: These are much nicer than anywhere else I’ve had this flavour before but I agree with Speedie on the part that I still don’t think chicken n cheese go. I fully don’t get it!

2. Chef’s Kujabi’s Hot Sauce
SPEEDIE: These are hot but not unbearable. It’s fiery but tasty at the same time.
TONGO: Agreed. They’re actually milder than I expected them to be. I expected the heat to take the the taste away but it didn’t. Aside from the pepper this was good flavour.

3. Hot BBQ
SPEEDIE: Raassss!! This one’s a bit too spicy for me. I can’t handle it… where’s my drink?
TONGO: Flipping hell! These are mad hot!! The best way I can describe them is this… you know when you smell a jar of homemade hot pepper sauce but it tastes like how that smells but without the kick! I know this sounds mad but that’s the best way to describe them if you ask me. I bet Rain will try say it’s minor though.

4. Honey Jerk
SPEEDIE: Just like the Hot BBQ, it was a spicy one. This was the hottest out of the lot. The chef compared it to Nando’s medium. They lied. It was more like extra, extra… EXTRA hot! I didn’t enjoy it. You could tell it had a jerk flavour so if you like spicy food this is the one for you.
TONGO: Taste hotter than the Chef’s Special hot sauce to me!! It also tastes like when chicken is cooked using a jerk seasoning sauce from a jar rather than how chicken tastes when you do them in a jerk pan yet it is hotter than the Chef’s special which is strange as jerk isn’t usually that hot / peppery in my experience.

5. Hibiscus Sticky
SPEEDIE: When they called these sticky, they weren’t joking. They really are. Come like PVA glue from primary school days. #ifyouknowyouknow But don’t let that deter you though. They’re actually very nice. Slightly spicy but with a kick that makes you lick your lips and go in for more.
TONGO: Recommended by another patron in the restaurant, a young up n coming wing connoisseur. He’s 10 years old and eats / tries wings at every restaurant he goes to! #shoutout to @official_yung10_gibbs_jj.10 – keep up what you’re doing young man! In my opinion though, I think it was kinda like the wing was a bit overcooked was a bit more crispy than the others, wasn’t as succulent and I didn’t really like the flavour too much. It was passable but I probably would never order them again.

6. Smokey BBQ
SPEEDIE: These were just like any other BBQ wings you get. Very messy with lots of sauce. Finger licking good!
TONGO: These are your generic BBQ wing but the sauce, although not overbearing or drowning the wing, has got a slight thickness to it. It’s nice but definitely not my favourite.

7. Jalapeño Lime Brazil
SPEEDIE: Now this one is interesting. I will bet you’ve never had anything like it before. It’s unique, it’s sweet, it’s definitely worth trying.
TONGO: These were proper! Considering the name, it’s got a sweet undertone n it’s like the lime was sweet! I really liked that one! I will definitely be ordering these again.

8. Signature Dark & Stormy
SPEEDIE: This was my favourite by far! TGI’s Jack Daniels wings has nothing on these. I’m most definitely coming back for a portion of these. These were sweet, crispy and full of flavour!
TONGO: Now these for me are the winner! These and the Brazilian lime. The Dark & Stormy… meant to have alcohol which I couldn’t taste. Nice blend of flavour, bit of sweet, bit of BBQ, no tang, meat was succulent, slightly crispy on the edge, my only complaint is there wasn’t enough of them!! These wings need to be bigger, well bigger for that flavour!

9. Honey Soy Garlic
SPEEDIE: I weren’t a fan of these ones. They were ok but anything following on from the Dark & Stormy ones was always going to be a challenge.
TONGO: I thought this was banging I can’t lie… smashed the @Clutchchicken version to pieces! Much nicer flavour, much better fusion of the ingredients and not so intense with the soy sauce.

SUMMARY: No long ting… The Dark & Stormy wings did it for us. They were amazing! They are definitely the clear winner of the flavours we tried. Speedie says they’re definitely the best wings he’s had anywhere. For Tongo the jury’s still out but he says off the top of his head he can’t think of any he’s liked better so this might be the winner.

There’s a good selection of wings at Caketail and you have to be reminded… THIS IS A DESSERT SHOP!! #letthatmarinate ? Their wing flavours and variety would put a lot of establishments who specialise in chicken wings to shame.

A Nice little spot but although on Kings Road, you would miss it if you wasn’t looking for it. Our waitress, Ramina, knew the menu well and her service was great. This place has huge potential to have many spots all over London and If we didn’t live so far away we can honestly say we would be there on a regular basis trying out all of their desserts. They have a healthy selection of vegan and low sugar options as well.