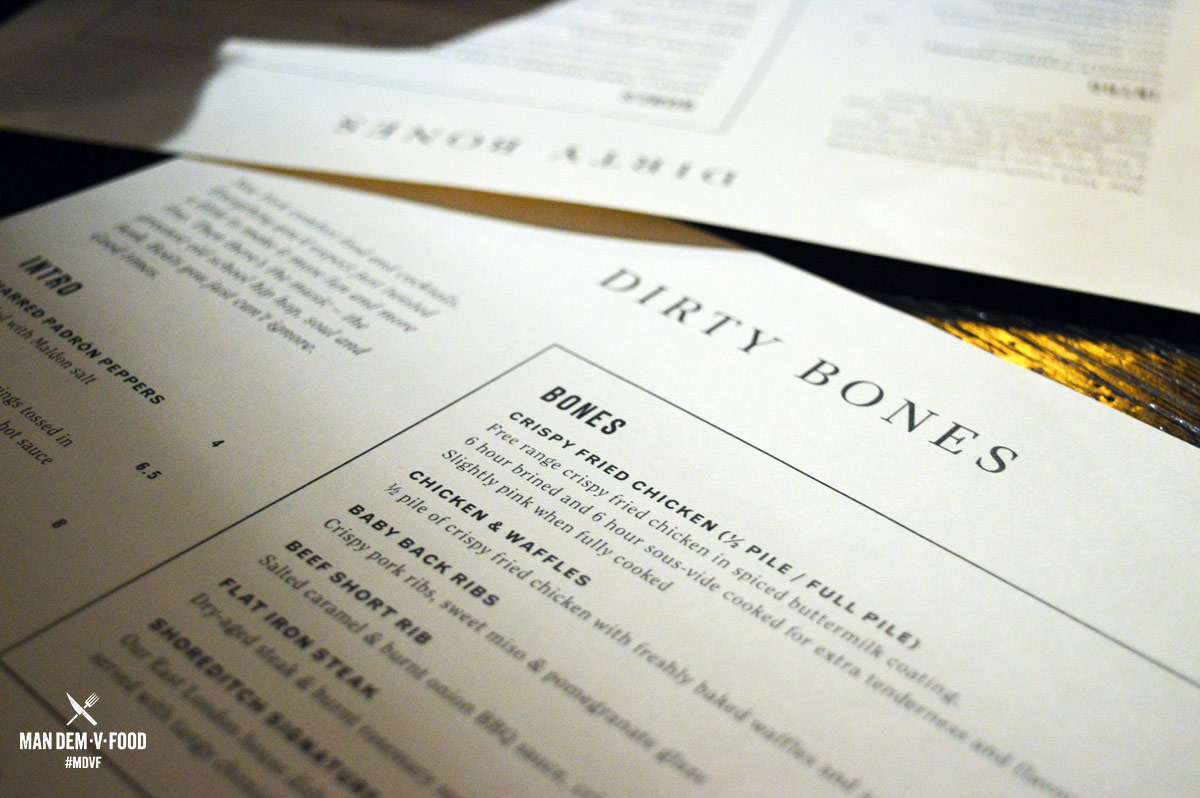 So we have decided to reveal our #MDVF nicknames so you can identify our individual reviews. Watch out for our mini bio’s in upcoming reviews.

Firstly, introducing “The Photographer”. He likes the finer things in life and knows them undercover eating spots. The type of spots you don’t share the name of on social media and instead just hashtag #ifyouknowyouknow

The Photographer is the one who was banging on about Meat Mission being the best burger in London from two years ago. Props where props are due, the #MeatMission burger was fab.

So when The Photographer mentioned @DirtyBonesLondon the rest of the Man Dem didn’t even ask what the cuisine was. The table was booked and in a flash we found ourselves in Shoreditch, in a building many of us have passed on countless occasions not knowing that The Photographer was a frequent attender.

FOOD:
First off, the starters. There were a few things the #mandem wanted to try so we just ordered all of them, well most of what was available anyway. We chose the hot wings, (which the waitress warned were “hot!”), the salt & pepper squid, and the unusual cheeseburger dumplings.

When the hot wings arrived our initial thoughts were “The waitress must be gassing they can’t be that hot”, how wrong we were… They’re actually made in a dirty bones secret sauce and jheeze, they were hot. They should be called “matches” or something like that! None of the mandem could eat more than one. They still had lots of flavour but the fire was too much. However, if you like spicy food then we would definitely recommend it.

The salt & pepper squid were great. Simples. They were light, crispy and not too chewy. We would definitely order them again.

Now for the cheeseburger dumplings. The Man Dem have never heard of these before so we were curious. When the dish arrived the dumplings were different to what we expected but good different. They resembled the type of dumplings you get at a dim sum restaurant. Balls of smooth silky steamed pastry that enwrapped beef mince infused with cheese.

On to the mains and individual Man Dems thoughts on their meal.
CHEESE LOVER: Tough menu to choose from but I went for the fried chicken on waffles and of course Macaroni and CHEESE!The Chicken was finger licking, not too oily, this was the best Fried chicken I have had from similar style restaurants. The chicken actually had flavour after biting through the skin, compared to other restaurants who seem to forget the inside of the Chicken needs flavour too!

The fried Chicken was sat on a warm waffle with splashes of maple syrup, I was in my element.

However something was missing?  How could I have neglected a whole dish of macaroni and cheese, enough to feed two MDVF members, maybe not The Vegan, he is a big guy!

Now my other half is Bajan (from Barbados) so I know my macaroni from my cheese. Not expecting Dirty Bones to match home style cooking I carved up the dish and took a bite. The macaroni and cheese was so good and not far from how a Bajan would cook it, I almost asked for some sweet bread for dessert thinking I was at my mother in laws. Who taught this Dirty Bones chef how to cook?

PEPPERMAN: I opted for the crispy fried chicken (1/2 pile) which was 4 pieces of juicy fried chicken pieces. I was presented with a generous portion which consisted of 1 leg and 3 breasts. I was extremely pleased as those are my favourite parts of the chicken. When you order the chicken it comes with a choice of 3 dips, BBQ, sweet chilli and mayo. I requested the sweet chilli. I cannot fault the taste at all. It was crispy as the name said and had real flavour. When dipped with the sweet chilli sauce it just made me shout out “erh” ( #Giggs voice ) It was great tasting chicken.

For dessert I chose smashed mince pie. It’s a mince pie with white chocolate ice cream. It comes with coconut shavings but I don’t like coconut so I said “leave it yea!” ( #LethalBizzle voice ) When it came I tucked in straight away. The ice cream was simply divine. I’ve never had ice cream so smooth and so true to the taste. When coupled with the luke warm pie it was literally a eruption of textures in my mouth. I wished I had ordered another one.

THE MANAGER: Sooo, the Mac n Cheese burger is what got my attention straight away, the Mandem were like “you’re in a chicken restaurant” I was like “If I weren’t meant to have it, it wouldn’t be on the menu, let me live” and with that it was ordered alongside the Lamb fries.

Visually the thing was a work of art, taste was mouth watering and all sorts. The burger had a slight lean exposing the colourful but sexy macncheese filling, with the pulled pork and beef patties peeping from behind the brioche bun like a parent waiting Christmas deliveries from Royal Mail! In a word, this burger was awesometasticamazeballs (it’s in the Cambridge dictionary). The first bite took me back, it had me thinking about thanksgiving in Atlanta, Barbecues at Glastonbury and an array of other emotions that would only be fitting of 50 shades of grey. The Macaroni Cheese was perfect, perfectly cooked pasta, flavoursome cheese sauce which almost acted as a layer of cheese. The pulled pork was subtle, almost not there but you could taste it, suggesting that the taste was not overwhelming but complementary.

Then, the Lamb fries! Possibly the best thing I have tasted (in regards to fries) since reviewing food establishments. I wasn’t sure what to expect but wow! Perfectly fried potato, with a smooth sauce which soaked through to the bottom of the fries, then laced with chunks of premium lamb which could easily be taken away and served on its own as a starter, but to link with the fries and the sauce! Whoever invented this needs to receive the nobel prize for food! The combination was faultless! And I would recommend them both to EVERYONE!

SWEET TOOTH: Being the #sweettooth of the #mandem of course I was only ever going to order the photographer’s recommendation of the chicken & waffles. I can’t lie, for a brief millisecond I was tempted by the crispy fried chicken and the baby back ribs but instinct (and possibly a need for a sugar rush lol) brought me back to my senses lol I knew what I wanted before some of the mandem had even looked at the menu! Although I skimmed that part of the menu I wasn’t even interested in the starters… just bring me my food init! #pleaseandthanks

The rest of the squad deliberated on the starters and I grudgingly agreed on the choices. Although I must admit the salt & pepper squid was nice though. If I come back here that’s my starter sorted.

Anyway, my main arrived and that was that… talking done! 1st mouthful… OH… MY… WORD!!! Yes, yes, yes, yes, yes!! You may recall in our previous review of #ChickenLiquor we were talking about chicken being seasoned… well here it is! The chicken was VERY well seasoned and bursting with flavour. Imagine my dismay that it even went through to the bone! The chicken pieces were succulent and fleshy, and 2 good sized pieces per portion. Both pieces were propped on top of two light n fluffy waffles with a small but profoundly generous pot of maple syrup! It was like Mary Poppins’ handbag… how did it all fit in there? The dish was excellent, I cannot fault it. It’s a “must have” if you visit this establishment.

Now for my ‘milk & cookies’ which is actually a dessert made of warm soft baked chocolate ganache cookie accompanied by a shot glass of milk gelato. Warm cookie and ice cream, how can you go wrong? Answer: You can’t! The cookie had just enough ‘goo’ n chocolate that it wasn’t too sweet or sickly… I could happily have eaten it on it’s own. The gelato was smooth n creamy, and actually tasted like milk ice cream and was enough to pair with every mouthful of cookie… just how it should be! Sugar fix satisfied!

SERVICE:
On arrival, the place was almost packed and it was  only a Monday! However, we were met by a pleasant young lady who showed us to our makeshift table (two round tables pushed close to accommodate us) immediately. Our waitress took a while to come over but once with us was very knowledgeable of the products and helped with menu recommendations. And we have to admit she was bang on about the hot wings! The staff have the right mix of professionalism, politeness and banter. The manager even came and poured one of the mandem’s lemonade as if he was serving wine! Haha

OVERALL:
#DirtyBones has a buzzing atmosphere with an eclectic mix of music playing in the background.
Genuinely a well rounded establishment, it can cater for large groups and has several spots for an intimate couple setting. They even present you with a comments notebook for customers to write in when they receive their bill, which is a nice touch. The restaurant also turns into a hip hop and RnB party on a Friday and Saturday night so go check it out!