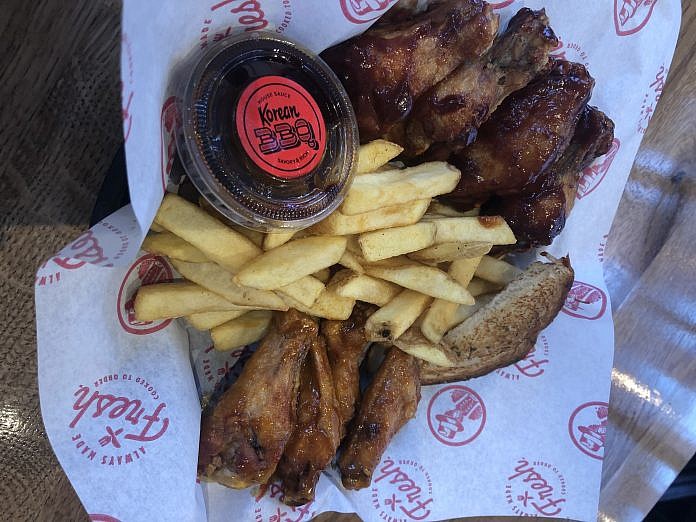 As we plough through London seeking out who does the best wings we put it out to you, our followers. We went through the suggestions and @SlimChickensUK came up. None of us had ever heard of this place so we thought we would give it a go. On a sneaky corner in Soho is where you’ll find this swanky #ChickenShop. Let’s see if our followers know their stuff!

SPEEDIE: As you walk in it looks like a modern day takeaway. The counter is right in front of you and behind the serving staff you will see your food being prepared in the brightly lit, open kitchen. On the left hand side of the entrance you will see one of those large digital display touch screens where you can order and pay for what you want rather than speaking to someone. We had questions so we went to the counter. 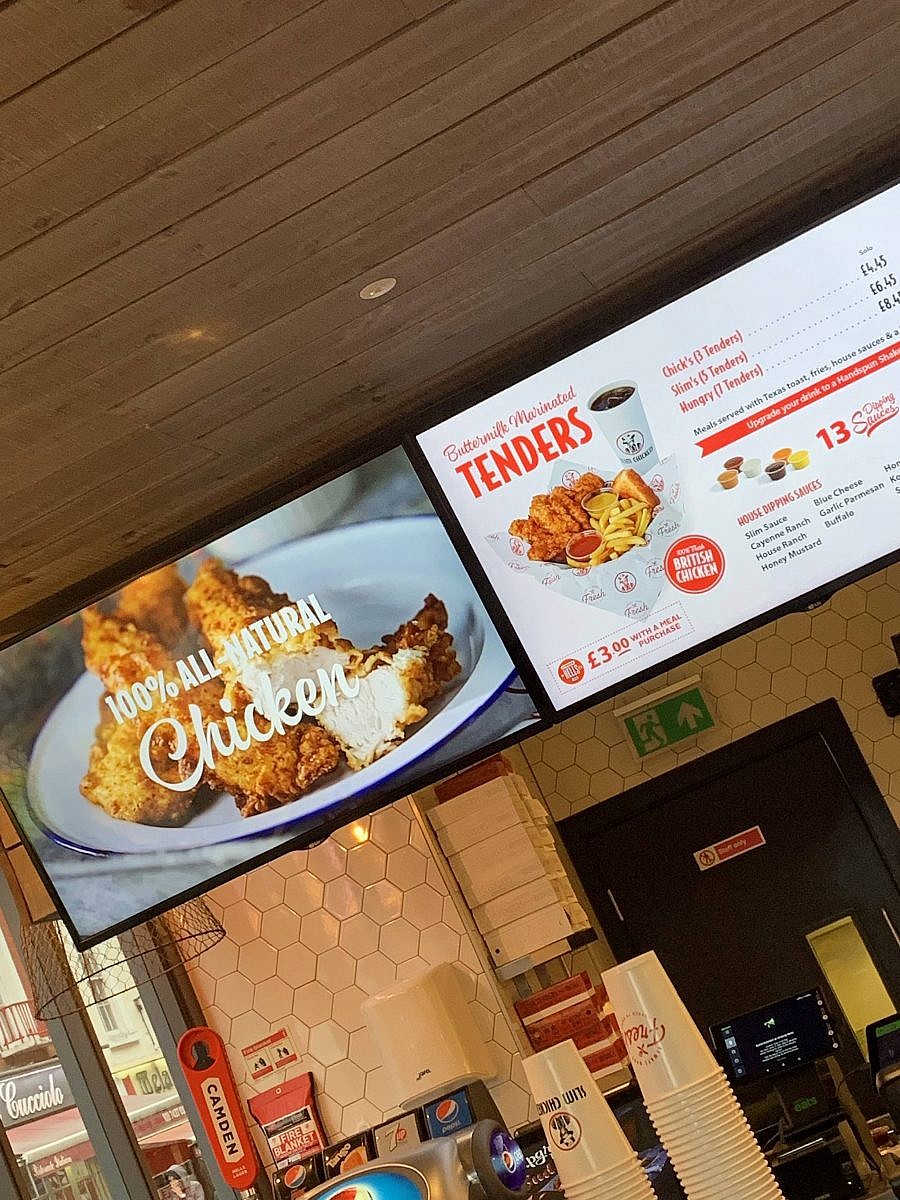 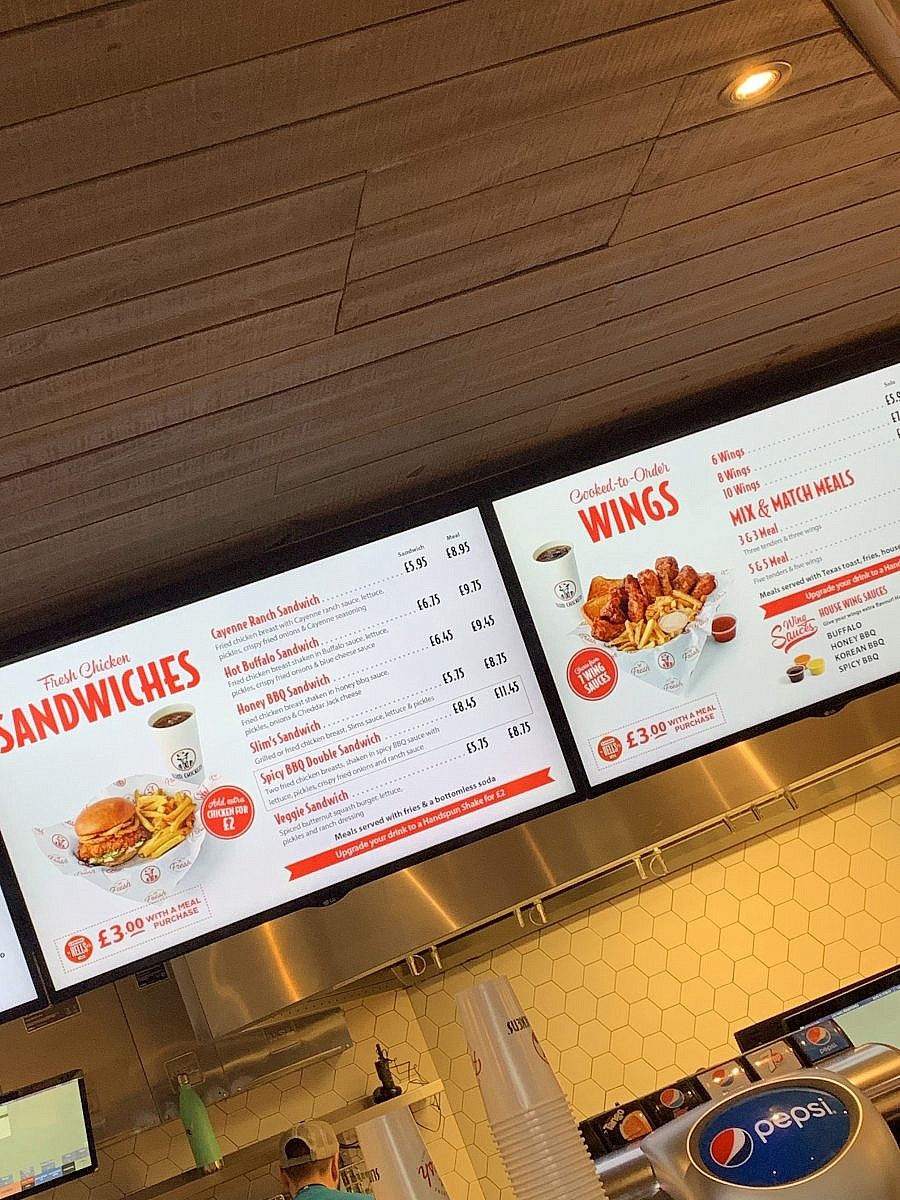 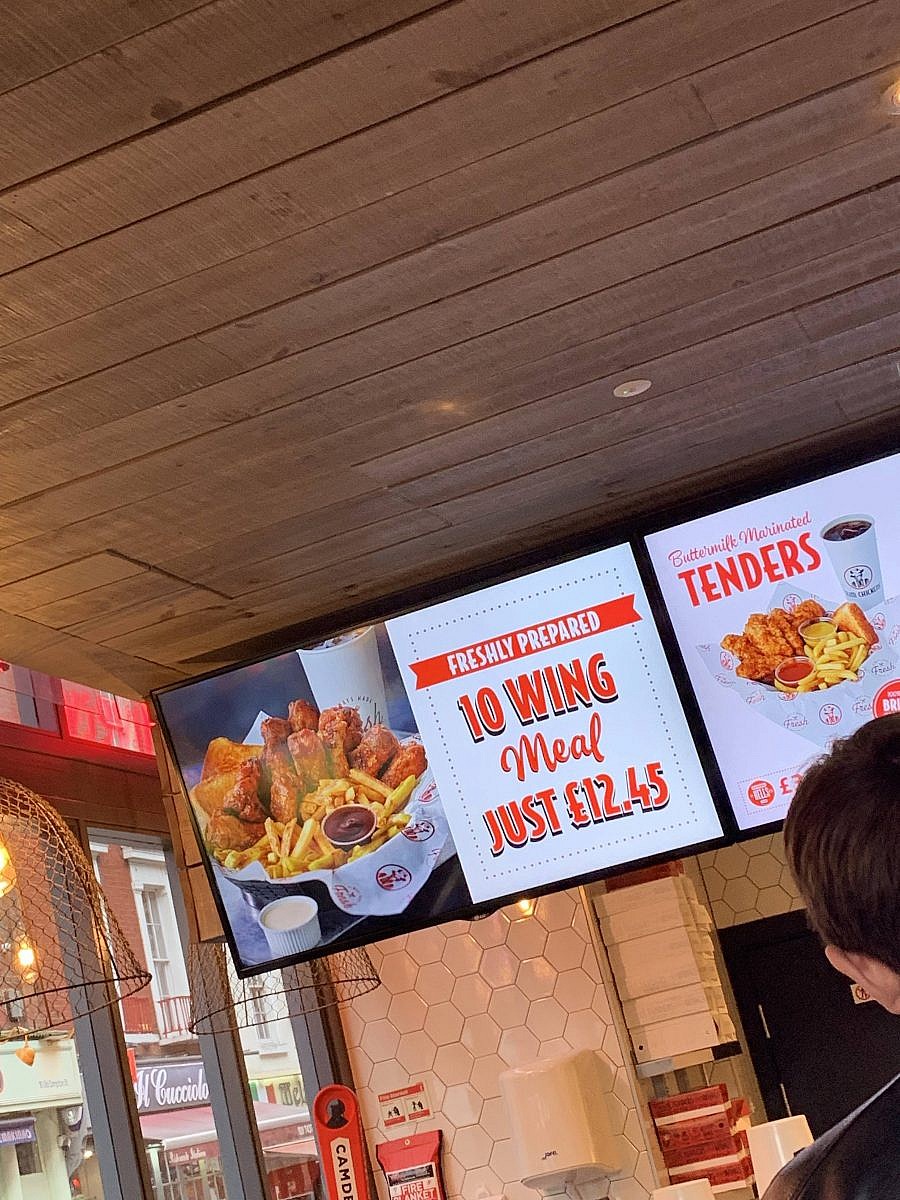 The waitress, Lydia, was very helpful. I asked if I could split my flavours, which you can, but only if you order the 8 or 10 portions. As I weren’t really hungry I asked for a solo meal of 8 wings consisting of Honey BBQ & Mango Habanero. I had to double check the Mango Habanero wasn’t a spicy one but I was assured it wasn’t.

When my food arrived I got free fries! Apparently a trainee in the kitchen made an error. I just said thank you and smiled. I took a bite out of the mango wings and my first thought was blank. It had no taste, no flavour, just chicken. It was sticky and the chicken was cooked well but there was nothing to them.

The Honey BBQ wings were just as expected. Messy with sweet, tangy sauce. Again, they were nothing to shout about. They were just your standard BBQ wings.

I can’t say I will be coming back for the wings but I do see me returning to try out their burgers and their jar desserts. 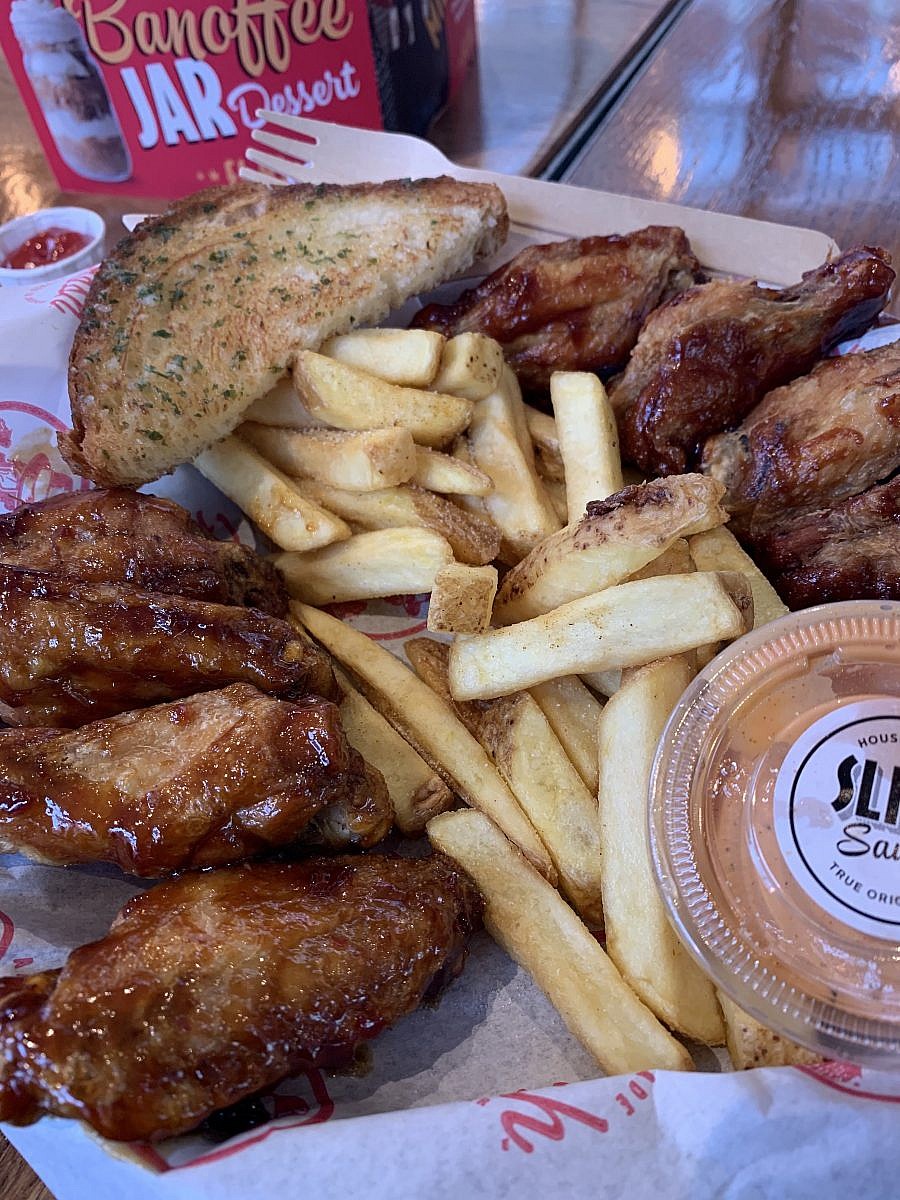 TONGO: With so many options to choose from I was confused about what to order. Speedie ordered his quick time, bounced upstairs and left me to it. Although our server / waitress Lydia advised against the Korean saying “you can order it if you want but, like, I wouldn’t order it!” When I asked why, her reply… “well it’s… it’s just Korean init!” Lol Her cheekiness and banter was unrivalled! Having said that her knowledge of the menu and products matched the level of her banter.

After a little more deliberation I I ordered the 8 wing meal which i thought was a bargain at £10.95 for 8 wings, fries, bottomless drink and “Texas toast”!! (I’ll get to that lol) Settling on the Honey BBQ and cautiously, the same said Korean BBQ that I was advised against… Gotta take risks sometimes, right?!

As I was now slightly dubious I tried one of the Korean BBQ first, which now I’ve tasted it, I understand what Lydia meant when she said about it being Korean. It had that distinct “Taste of the Orient” flavour that you are used to… maybe it was 5 spice seasoning, I dunno, but I instantly recognised the taste. Despite them looking dry and shy on sauce, the wings were tasty and although I would’ve preferred more (just because) the sauce was enough to still give you the flavour of it and also let you experience the crispiness of the chicken. They were nice but not sure I could eat more than the 4 that came in my order in one go.

The Honey BBQ was me all day!! Sweet, smokey, sticky and succulent! The wings were gooooddd!! The sauce was what I consider proper BBQ sauce and had me regretting I didn’t order the whole 8 of these bad boys!! I liked them a lot and will definitely be swinging by Slim Chickens again for these.

Slim Chickens is not going to be my number one for wings spot but is still a great place to have in your food venue repertoire. I shall be back with Speedie for the tenders and those desserts! 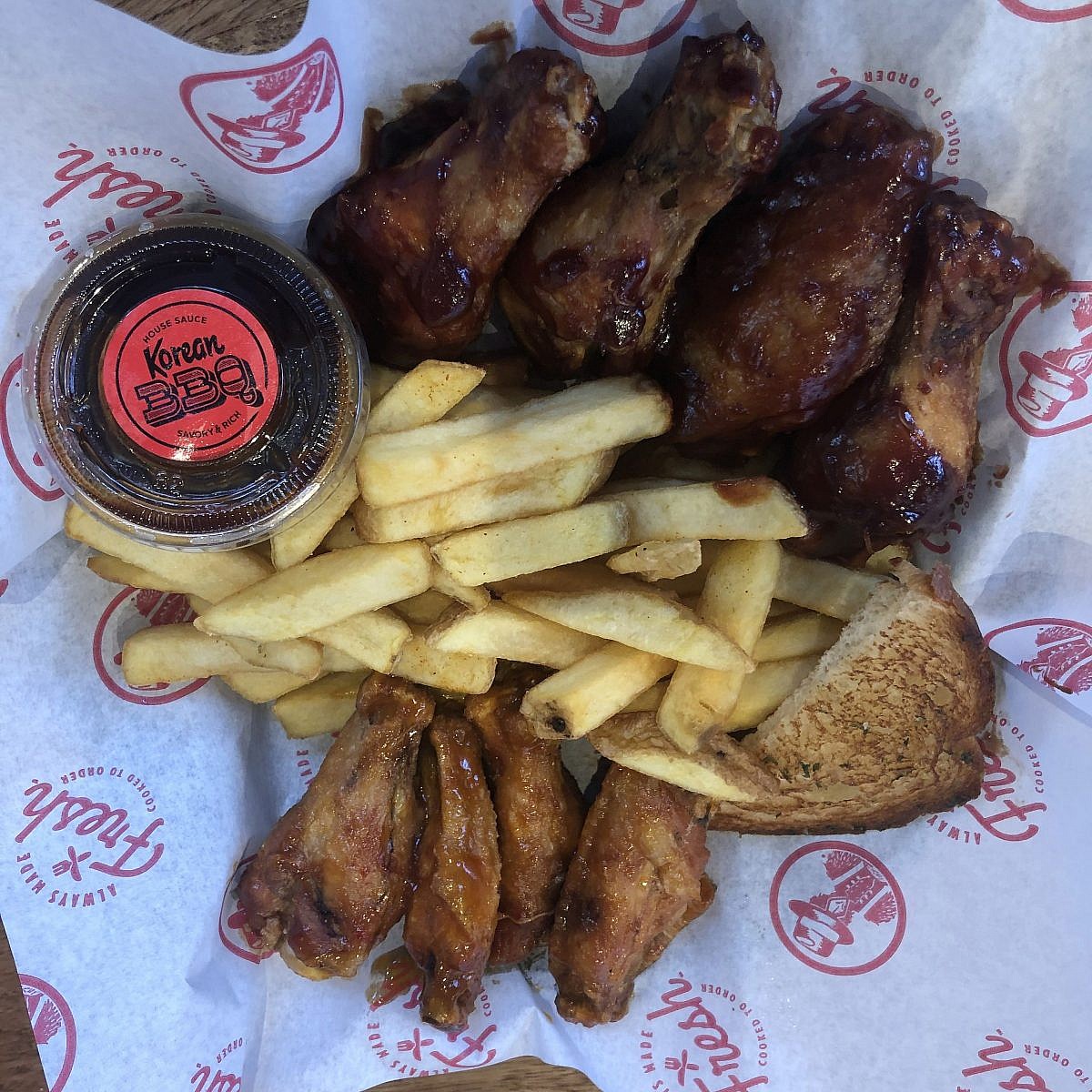