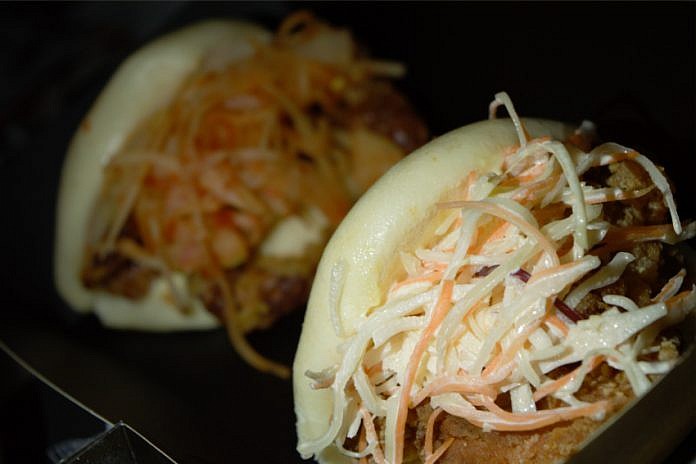 It is 2018, time for new things. New burger buns in fact. Brioche buns is sooo 2017, the Man Dem’s new thing are Japanese burgers and their ‘Hirata Buns’.

We first got introduced to Hirata Buns in the @absurduk review by Sweet Tooth and Cheese Lover. The second Absurd review saw the rest of the Man Dem pop their Hirata cherries.

So what is the fuss about. Will the Man Dem really ‘bun’ (slang for ditch, forget about, get rid of, etc) Brioche Buns? We need to find out. All roads lead to 3 Appold Street, where you’ll find @Beer_and_Buns above the K10 food place. 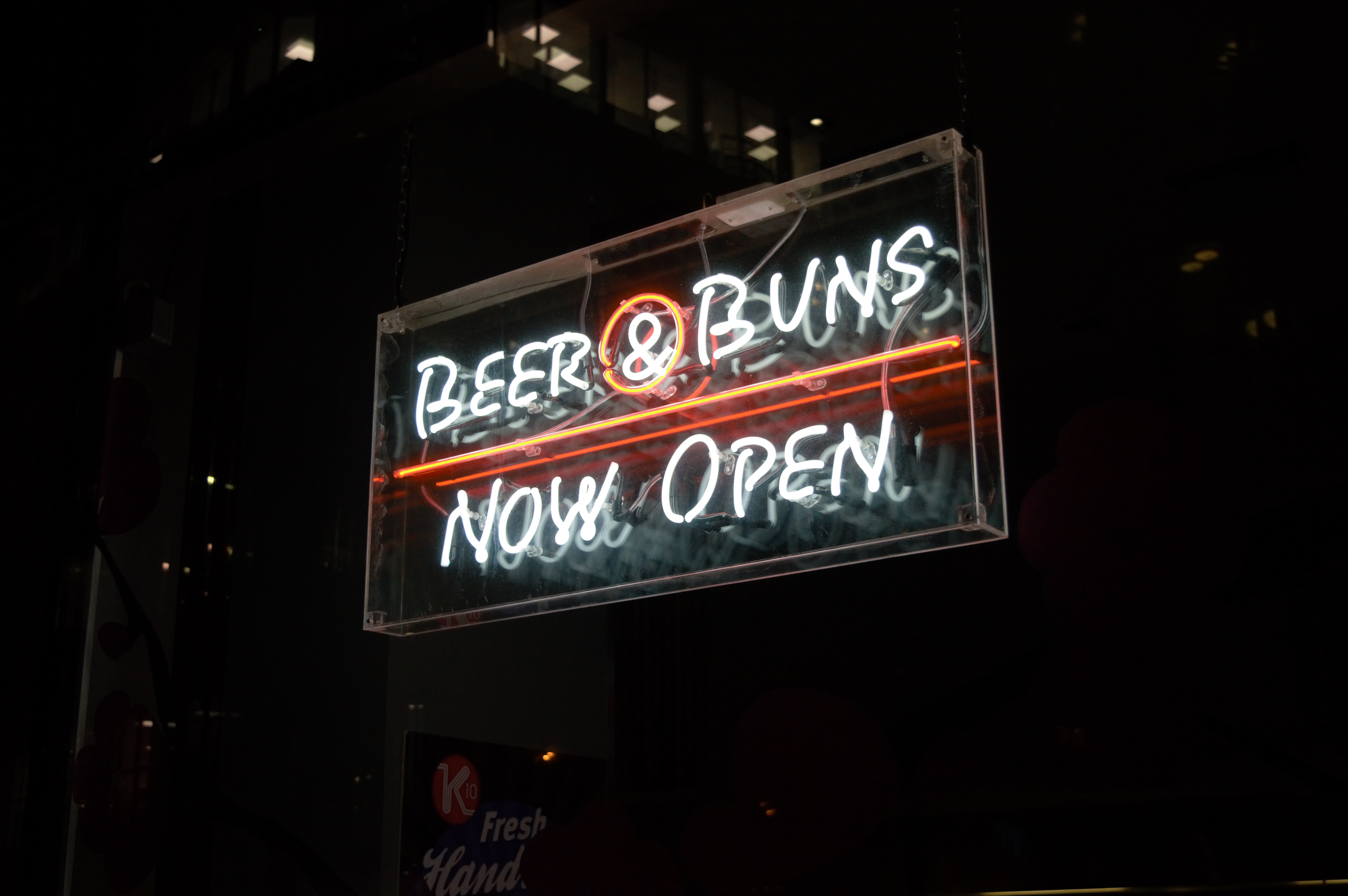 As you walk in and go up the stairs the walls are covered in chalk graffiti. You can even get your #Banksy on and add to it yourself. Ask one of the waiters and they’ll give you chalk to add your artistic creations to the walls. But enough of the arty stuff we came to check out their buns… can they take the title for best burger bun, let’s see!

PEPPER MAN: I will deal with the starters. We are the chicken wing specialists, so we obviously ordered the wings. There were a few different types to choose from. We went for: 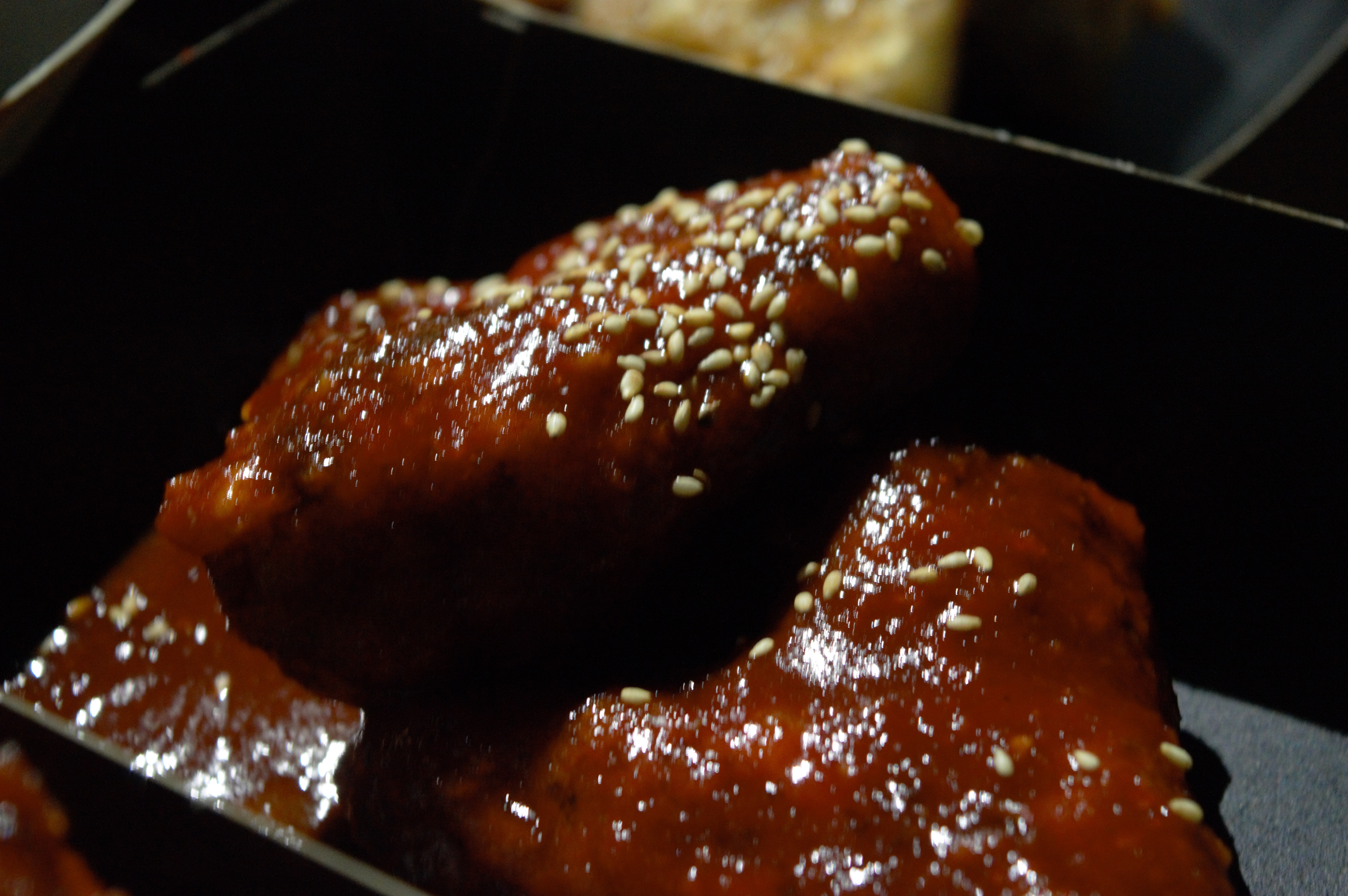 You order and pay for your food at the bar and they give you a buzzer like @TGIFridaysUK which you collect when it vibrates. Cheese Lover returned with his mains and our wings (oh yeah , starters and mains come together, unless you want to queue up twice to order). As I went to collect my main order, these craven men (Cheese Lover and The Manager) are tucking into the sweet & spicy wings. Ah wah di rass? Do they know who I am? I’m Pepper Man!! Those spicy wings had my name written all over them. KMT!!

There were only 2 of each wing (6 in total) so I had to miss out on those. I was pissed. I was left with the Korean Hot and the Naked Wings instead. In my opinion they were both good. I really enjoyed the Korean Hot ones. Slightly crispy coating but drenched in the Korean hot sauce which was sweet but had a mild fiery kick at the same time. It’s not spicy though. I would say on a par with @nandosuk medium. The Naked Wing was a fried chicken wing and it had a flavoursome crispy coating with succulent chicken underneath.

The squid is on the menu as a bite. It is a starter but your whole order comes at the same time. The portion I received was huge! It could have fed all of us. Maybe a slight exaggeration but it was a lot more than expected. As much as it was a large amount it was horrible. Very chewy and zero taste. It came with a lime on the side so I squeezed that over it to add flavour but it couldn’t be saved. What a waste!

My favourite out of the two burgers was the soft shell crab burger. That was delicious! Looking back I wish I ordered 2 or even 3 of them. Imagine eating fish cake or tempura prawns from a Thai restaurant. Add the papaya salad and that was the taste of the burger. Sweet, crispy and the right amount of meat. The chicken was cool but it didn’t wow me. It was just another chicken burger in a very soft bun. All the flavours were there as you would have expected but I just think the crab was much more palatable. I think the @absurdbird chicken burger was better.

Now the main difference from other burgers you may of had is that the buns are super soft almost pastry like bread. They’re actually called steamed Hirata buns. They complement the filling brilliantly, however, once you’ve finished the filling and you’re eating the last of the bread it’s literally tasteless. I didn’t bother finish it. Wasn’t a fan of the texture when on it’s own.

I also ordered the fries which come with a spicy mayonnaise. I took 3 chips and gave up. I need ketchup. The chips themselves weren’t bad, but as I couldn’t add any sauce to them due to the pathetic amount of mayonnaise and the fact they don’t have ketchup I couldn’t finish them. It’s actually disrespectful at what they give you to dip your chips in.

For the record they don’t sell juices either. Only fizzy drinks, Japanese cocktails and beers. You telling me the Japanese don’t drink orange, apple or cranberry juice? Come on, @beer_and_buns can do better. Minor changes can make this a decent lunch spot or a place to get a quick bite after work.

THE MANAGER: Sooooo I’m late again, not my fault, postcode on @waze took me somewhere else! Hot, flustered and hungry, I walk into the spot actually wondering if it was open. Lights were dimmed, almost off, chairs being stacked. A cleaner pointed me to the stairs to the restaurant. Maybe something for Beers and Buns to think about! Anyhow, I was greeted by the mandem who were sat at a rather dark and dingy table. Probably as dark as a night flight on a long haul plane ride. As I was late, I wasn’t greeted or asked any questions but the mandem stated that contact with the staff was minimal and almost nonchalant. Bah! Who cares I just wanted the hirata buns!

Chicken wings – what can I say, I was actually taken aback! First up, I had the spicy version of the wings. They had taken time with these babies! The underlying batter coating was crispy which suggests a proper fresh batch of the wings. The spicy bbq coat was just that “spicy but not overbearing” and had a slight nudge, not a kick though, a nudge. These alone are something I’d come back for! There was a brief discussion about them being better than @Clutchchicken (read the review from our visit) but that was soon pushed under the table. The second wing was the non spicy variety, meh, basically like the spicy one but with no spice haha, I won’t bore you with that detail again.

Next I ordered the cheesy chips, (or fries) and one Beef bun (Bulgogi Beef) and one chicken bun (Chicken Karaage). I believe the beef was done in a brisket style, but to be honest the beef was a little tough, maybe dry or even over done. I’m not quite sure, it wasn’t chewy but it was enough for me not to want a third bite, yes I took a second, just to be sure. In these things you always compare to places you have been before to say which is better, and……. actually let’s leave that till later. 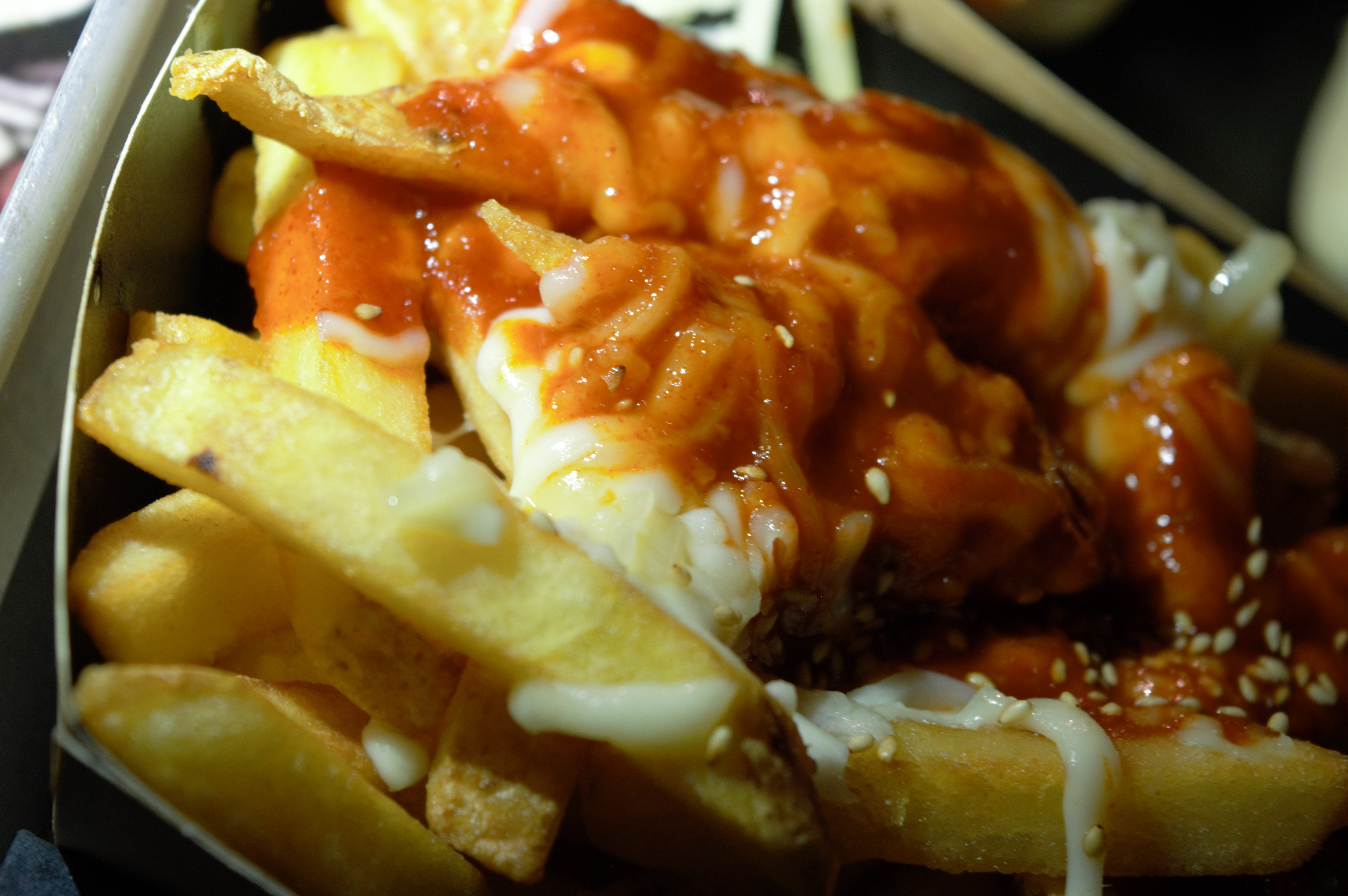 The second was the chicken bun… oh the buns are a Japanese bread which is steamed, very soft and almost melt when it comes into contact with the tongue, but! Yes BUT! …There is almost no flavour to it which is good as you can focus more on what’s inside, a contender for the legendary brioche bun? Maybe.

Right, back to it, the chicken, this was a fried chicken piece wrapped in the bun with added mayo ( I couldn’t work out if it was spicy) then topped with coleslaw, honestly it was OOOOOOOK, and that’s the best word I can use to describe it, aiight OK isn’t a word but to me if you bought the bun from a Japanese supermarket, bought a boneless strip from @sams_chicken in neasden and added mayo or perinaise you would have the same thing, and two for the price of one… mate! The Sams’ version may even be more satisfying! I dunno, I personally think what we were given at @Absurdbirduk was leagues above, and more value for money. 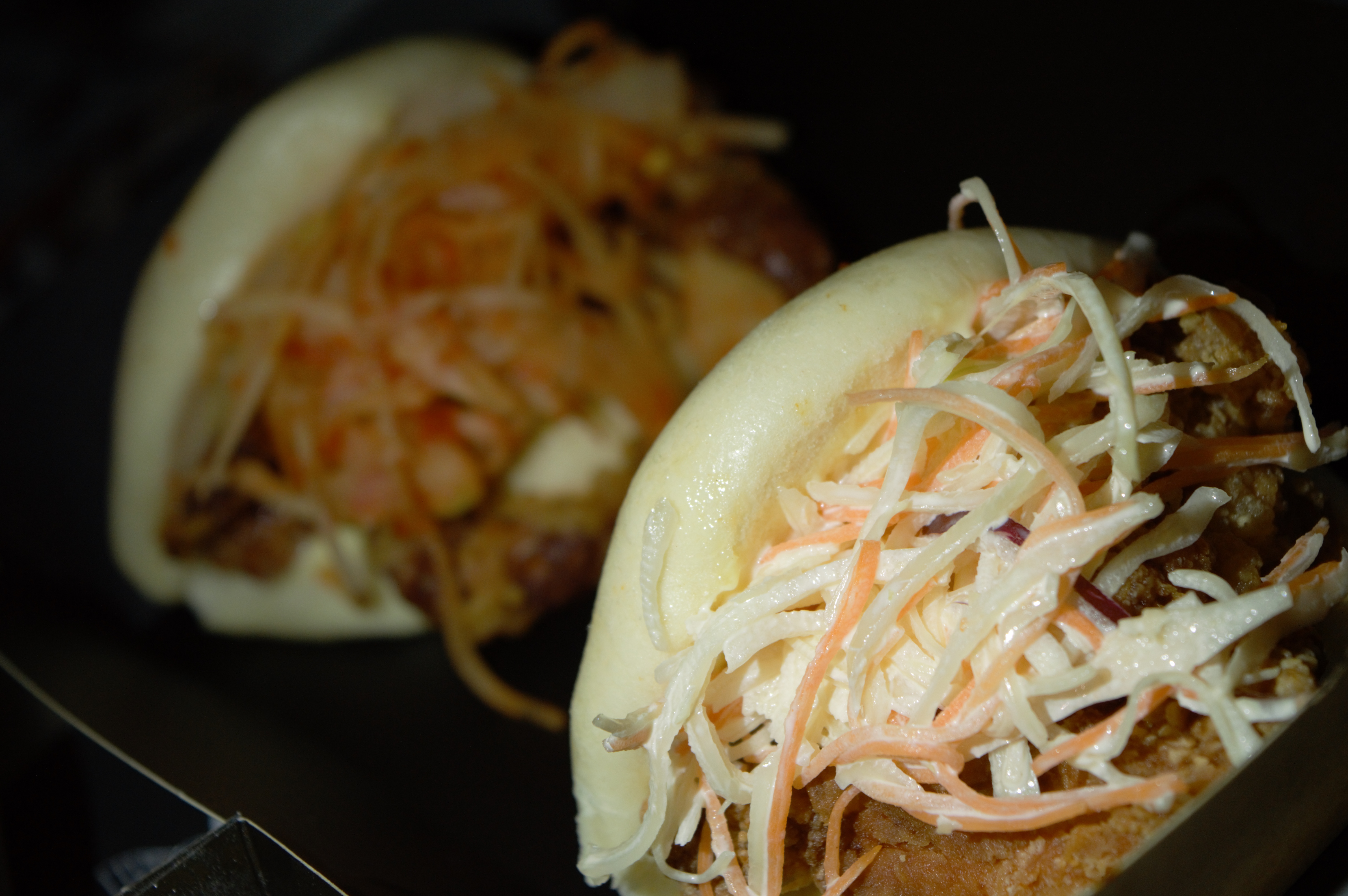 The last thing to comment on was the cheesy Korean fries. In essence they were good, not too much sauce, just enough cheese but not cheese that was plastic to taste but more so a mild flavour. Question though, why can’t you restaurants ask what strength of cheese we want on the cheesy fries!?!?!? C’mon! Would make the whole thing just that lil bit better, it’s not even Korean cheese, do Koreans do cheese? Hmmmm.

CHEESE LOVER: I could be on the verge of leaving Team ‘Brioche’ bun and transferring over to Team ‘Hirata’ bun. After my recent #absurdbird experience, Beer and Buns might seal the deal.

Before signing, I had to do my final due diligence on team ‘ Hirata’. I ordered the signature Chicken Karaage bun. It looked the part in its pale Japanese style bun. I took my first bite and told my agent to begin negotiations… where’s that pen? The soft succulent bun was the perfect combination with the chicken, and the ‘koshu slaw’ added the extra kick of flavour. Karaage is a Japanese cooking technique in which the chicken is deep fried in oil. The coating was crispy and inside was tender and seasoned enough.

Before I signed the contract and waved goodbye to team ‘Brioche’ bun, I had one more test to confirm the grass was greener in ‘Hirata’ land. In anticipation of being converted, I sunk my teeth into the Bulgogi Beef Bun. Bulgogi is a Korean beef BBQ recipe, Beer and Buns serve it with Korean Kimichi which is made of seasoned vegetables and salt.

Unfortunately, this Bulgogi Beef Bun did not take me to the promised land. The veg didn’t blend well with the beef, the beef itself was lacking some zest. This tastelessness exposed the faults of ‘hirata’ buns. Thick! Bland! This was further compounded when I finished the beef inside and was left with what I can only describe as what tasted like I was eating a lump of flour! In comparison, I can eat a fresh Brioche Bun by itself once I have finished off the meat.

I will be staying on Team Brioche. The grass is not greener in ‘Hirata’ land!

SERVICE: Service was a bit ropey, but once you accept #BeersandBuns have gone for a city pub vibe you begin to relax into the surroundings. Shabby chic I think they call it. Dull lighting. No table service. Abrupt staff behind the bar.

OVERALL: This is definitely not a place for date night. Instead, it is perfect for a few beers, some Japanese infused burger buns and the odd chicken wing!