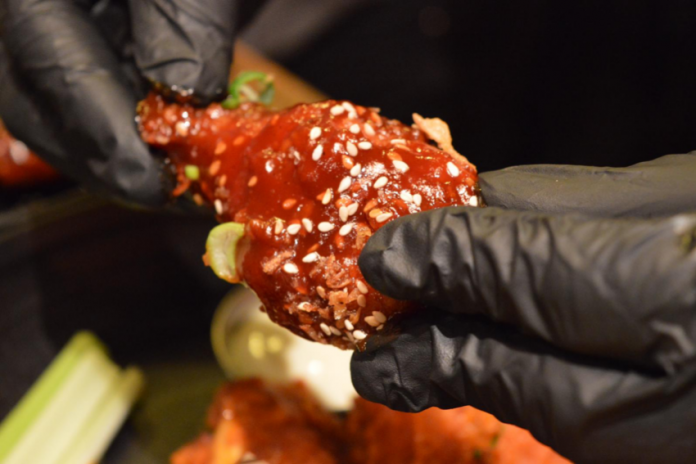 With our best wings campaign in full swing we decided to fly over to Wingmans “Authentic Wingery” who have been on the #MDVF radar for some time.

Rated by a few websites as having the best wings, and with a good variety of different wing types (sauces) to choose from, we had to wing our way down there to see what everybody’s been clucking on about.

SPEEDIE: I jumped on the Jubilee Line from east to north weezy (Kilburn, NW6) to the infamous Wingmans Wingery. This place has been recommended to me by a number of people so let’s hope it lives up to the hype.

After a short deliberation with one of the waiters on which flavour wings we should choose, we opted for Buffalo, Sweet and Smokey BBQ, Jamaican Me Crazy and the Seoulja Boi options. You get 6 hefty wings for £8.

I started off with the Jamaican Me Crazy wings as I wanted to test the heat levels. I optimistically took 2 of those and quickly realised that was a bad move. These were proper spicy, super hot! My mouth was on fire! I said to Rain, “You can take this one back! No way am I eating a second.” He laughed as he was casually taking in the peppery flavours.

Next up was the Seoulja Boi wings. I had one and I was instantly impressed. It had a unique taste. The only way I can describe it was a cross between a bbq and buffalo wing without the tangy, vinegar taste. This was so good I saved my second one until the end.

Moving on I had the buffalo wings. These were nothing to shout about. The standard tabasco, vinegar taste. I rushed through them so I could extinguish the bitter taste. Tracks and records still win the best buffalo wings award in my view.

On to the BBQ… straight off the bat? These BBQ wings are the BEST I’VE TASTED! The glaze, the seasame, the chicken! It was at this point Speedie adopted gloves! MAN!

Finally I had the bbq wings. These were extremely saucy. I made sure I used the gloves that wingman’s provide to save me getting messy but still ended up with sauce on my top and jeans. These were good but they didn’t stand out from other bbq wings I’ve had at other restaurants. Seoulja boi wings wins it for me. They were my favourite.

After eating 8 wings and the rosemary fries I was full. I washed it down with their signature cocktail the “Mandem Juice”. This drink was serious (JME voice). All I could taste was Wray & Nephew white rum. I liked it a lot!

RAIN: Round the corner from me so I can’t complain, and I was on time. Walking into the venue it just looked like an average bar, the only thing that suggested food was the big logo on the wall “Wingmans”. Anyhow let’s get onto the reason why we were here!

Chicken wings, there were numerous flavours but we being the mandem opted for 4 of the 7 flavours available. This was mainly due to the fact we were couple Man Dem down. Had it been the full team I think we would’ve tried all 7. Sorry but a quick rant about the name, Jamaican me crazy – I hate the name with a passion, to me the name sounds like someone singing a Bob Marley song at #karaoke – poison to the ears! Other than that, I personally was excited, mouth watering. Oh, we ordered rosemary fries and sweet potato fries as sides.

First up the Jamaican wings (I can’t bring my self to say the name), these for me were awesome! They had a kick to them, the scotch bonnet peppers perfectly fused with the other flavours, odd flavours, I think I tasted lemon and cinnamon. The actual chicken was nice, big wings, high quality, definitely something I’d go back for regardless of what the others may think… they’re both lightweights anyway!

Second was the Buffalo, Speedie and Tongo both run from these, I mean buffalo wings are a classic! Like a staple, how can they not like them. If I’m honest there isn’t much to say here, the flavours were as expected, tangy with a kick, I’m sure if these were served at the Super Bowl the masses would love them, for me though the buffalo flavour gets a little over bearing after the second wing. My advice would be to eat these with a pint of water, that will help with the rich flavour this sauce puts out.

Finally in combo, the Seoulja Boi and BBQ. First the Seoulja Boi, an odd selection of ingredients, roast seasame, pineapple, pickled daikon to name a few. As I write this I’m still trying to work out what I tasted and trying to compare it to something. I could taste all the elements that made the sauce and in my mind it shouldn’t work, but my gosh it did! Complimented by the crispy chicken skin, and the high grade chicken, for at least 5 seconds I couldn’t hear Tongo or Speedie talking, their mouths were moving but all I could focus on was the taste. From me to you, get down there, try these and let me know your thoughts!

On to the BBQ… straight off the bat? These BBQ wings are the BEST I’VE TASTED! The glaze, the seasame, the chicken! It was at this point Speedie adopted gloves! MAN! That’s like eating popcorn with chop sticks! Why?! His excuse “they are too saucy” I say, matron! (Carry On films, ahhh forget it!) Whoever made this sauce, you are a genius! And the covering of it on the wing, amazing! Flavours out of this world! I would return just for the BBQ wings and nothing else, well, actually and the Mandem cocktail as well! Let me explain…

It was a school night and being sensible, it was only supposed to be coke all round, well, maybe a pint of apple juice, until our waiter who had to drink milk after eating the Jamaican (still can’t say it) hot wings said we have a cocktail called “Man Dem”!! Wait! What?! I looked at Speedie and he had that Newcastle look in his eye (ask him when you see him), even Tongo’s face was a picture! We ordered two! I don’t remember what was in it all I know is it had Wray & Nephew, Malibu and it was red! The Wray was the only rum we tasted, lol but generally it was a sweet tasting cocktail and yes, it was strong! Two of these and you might start dancing on a table, 1 will definitely have you smiling at everyone that walks past you! Expensive? Maybe, but I can safely say they did not skimp on the alcohol used.

But! The wings! In my opinion, this place is definitely a contender for best wings in London and I will be back!

TONGO: Of the four flavours we ordered I didn’t even try the Buffalo. I don’t like them and don’t get this Buffalo wings / sauce craze that has been sweeping the nation… I just don’t get the hype. The only exception has been the Buffalo wings at @tracksrecordsuk – they were a different breed. #salute

With that, I started with the Jamaican Me Crazy flavour. Now I don’t like pepper and on the menu these boasted to be “(EXTRA HOT)” and made with Jamaica’s infamous scotch bonnet peppers! The waiter (who is of Indian descent – and no I am not racially profiling, we actually asked him!) who said he is used to hot and spicy food said these were REALLY hot. However, I still decided to take one for the team (literally) and try one. I can honestly say it wasn’t that hot and I can’t really take pepper, they had a kick, yes, but wasn’t that hot for me. Maybe my pepper tolerance is rising, who knows but I would even have had a second wing if it wasn’t for the strong lime like tangy flavour they had. That part of the flavour spoilt them for me and put me off.

My next trial was the Seoulja Boi wings. The description on the menu made them sound like they were going to be tasty. When they arrived they were a delight to look at. They looked so good! But, as they say, looks are deceiving and for me, these were a let down. They initially had a nice flavour then the strong lime aftertaste kicked in and spoilt it. To me they basically tasted like Buffalo wings without the kick, and we already know how I feel about those! The taste was too similar in my opinion so it’s a no from me.

To get rid of the taste I started on my sweet potato fries… MY WORD!! These were the ting! Crisp on the outside, fluffy on the inside with that good colouring that looks like one of those red, orangey sunsets! Lightly drizzled with maple syrup and topped off with a caramelised Pecan Salt these were a dream! I think I have just found my new favourite sweet potato fries!

Anyway, back to the wings… Sweet and Smokey BBQ. Saved the best till last and all that! I knew they would be my favourite before I even tasted them and I was not wrong. I took a big bite and didn’t even care about all the sauce over my hands or face, that’s what the roll of kitchen towel is for. The sauce by the way was a very nice, flavoursome BBQ sauce, the title says it all definitely sweet and smokey, just how a BBQ sauce should be in my opinion. I enjoyed the wing so much I instantly reached for 2 more, making 3 for myself and there was only 6 of these bad boys altogether! Oh well, them man can eat the other wings innit.

In my opinion this place is average. I say this because I only “liked” 1 of the wing flavours so for me generally it’s dead. I was more excited about my sweet potato fries than 2 of the wing flavours I had! When we spoke Speedie⁩ said he wouldn’t go out of his way to go back there, I agree but I would try it again as there are other flavours plus burgers there to try and I know, if worse comes to worst there is something on the menu that I do like.

SERVICE: Now the Man Dem have visited, it is understandable how Wingmans have won a number of people’s choice awards. They have some interesting flavours of wings and we didn’t even get to taste all of them! There were some mixed opinions on the night but the clear favourite of the establishment were definitely the BBQ. (They really were something to talk about!)

The chicken quality for all their wings was good with lots of meat to rip off the drums & flats.

Wingmans is kind of tucked away, you wouldn’t expect such a place to be concealed in the depths of Kilburn. It is almost like a bar that has the option to order food even though they take over the phone table reservations and provide waitered service.

Despite there being a little hiccup at the beginning when we were being seated, the service was good, swift. Generally, the staff are knowledgeable. Our waiter knew his stuff… kinda! Lol His take on hot / spicy leaves something to be desired but other than that he provided us a good service all round.