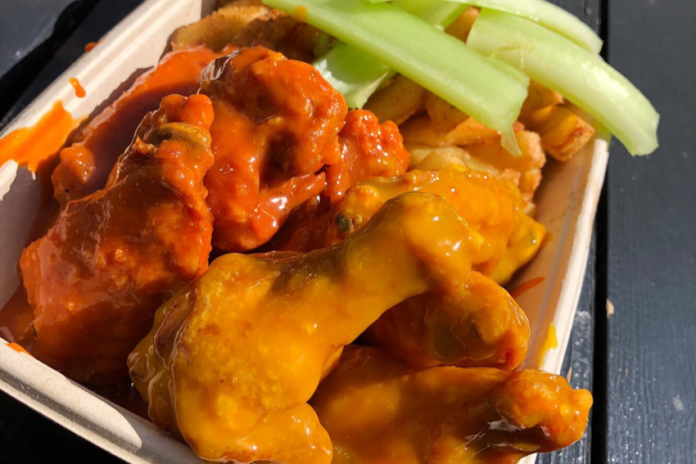 Another solo mission for Rain. We obviously didn’t realise how many contenders there would be for this ‘Best Wings in London’ campaign we created.

@OrangeBuffalo, always a spot that I passed, and thought “The Man Dem need to visit” but as we are in the midst of the “best wings in London” campaign we had to make this a  priority to taste these award winning chicken wings! 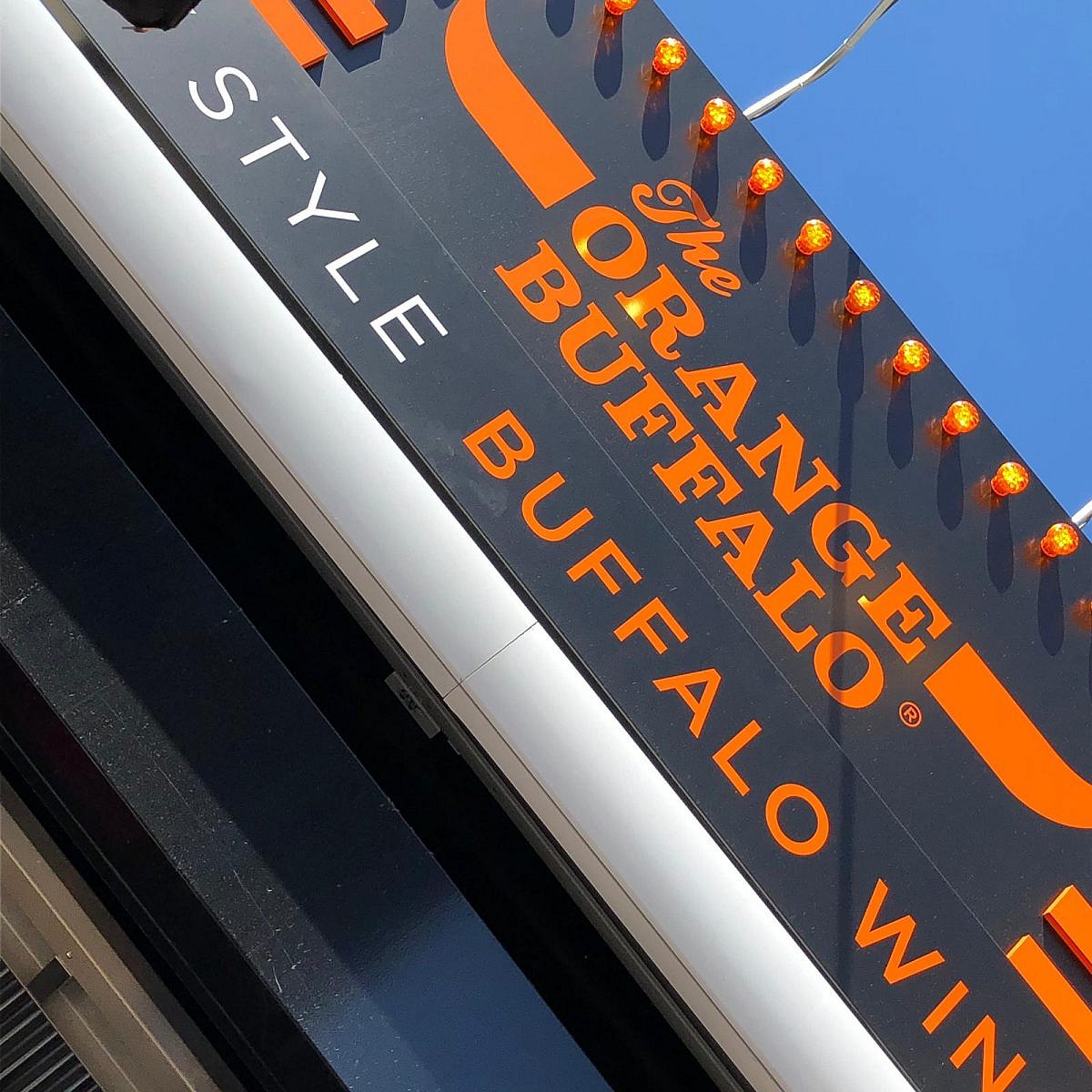 I am here to deal with the wings, nothing else! I don’t care about service or decor. The menu had wings of varying hotness. In my mind I can hear Speedie saying “I don’t like buffalo, it’s too tangy!” Good thing he wasn’t here as the menu only seems to consist traditional buffalo sauces, which is tangy and, to some, spicy.

Anyhow looking at the menu, the entry level for hot wing sauce looked like the K-Town sauce which was labelled as medium hot, through to Vincent which was labelled as Darn hot. As I skimmed down the menu I found The Viper, with its own disclaimer stating “Needs to be signed off and you need gloves!!!” The voice in my head said this isn’t die hard, you’re not a hero, don’t do it! Instead I ordered fries as a side helping! 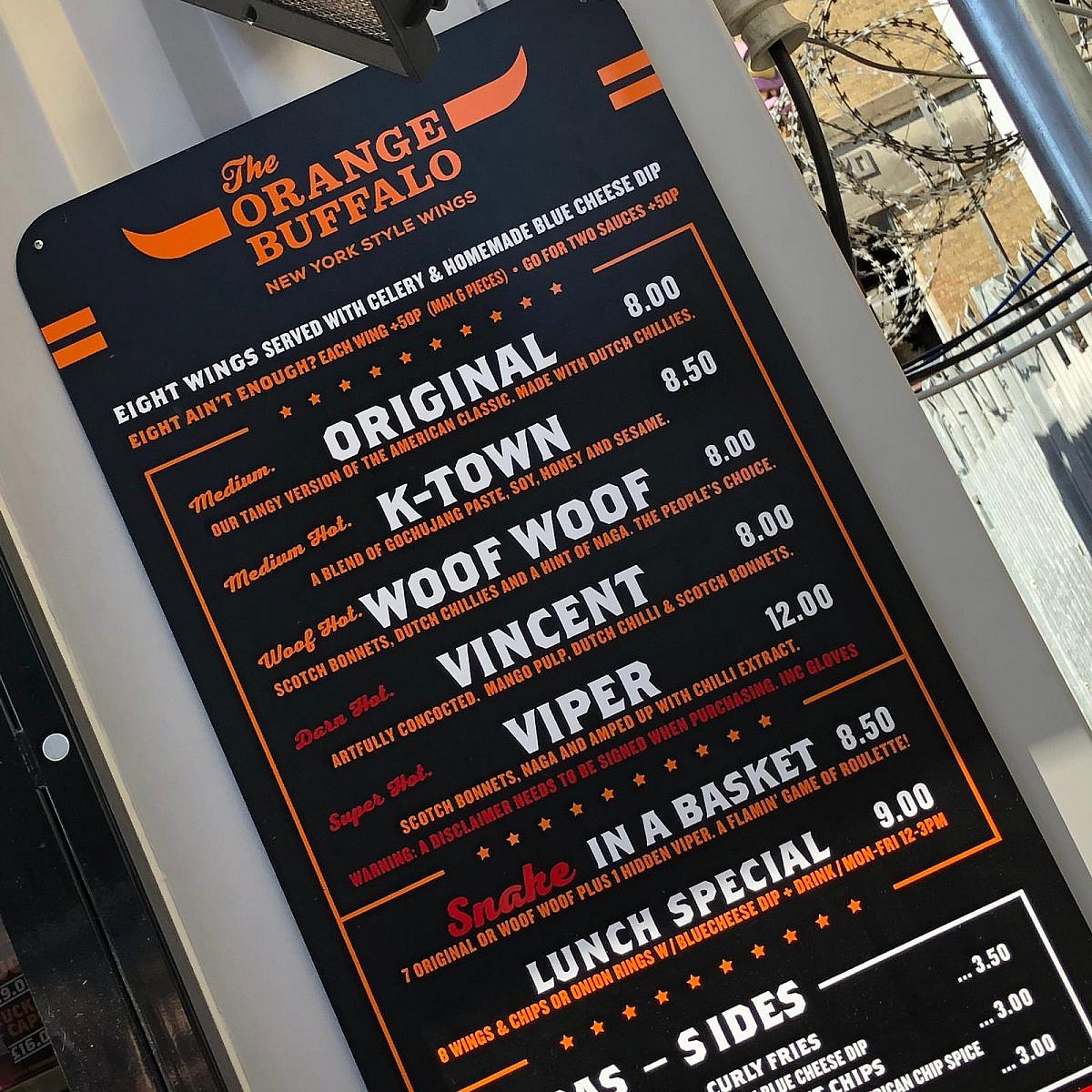 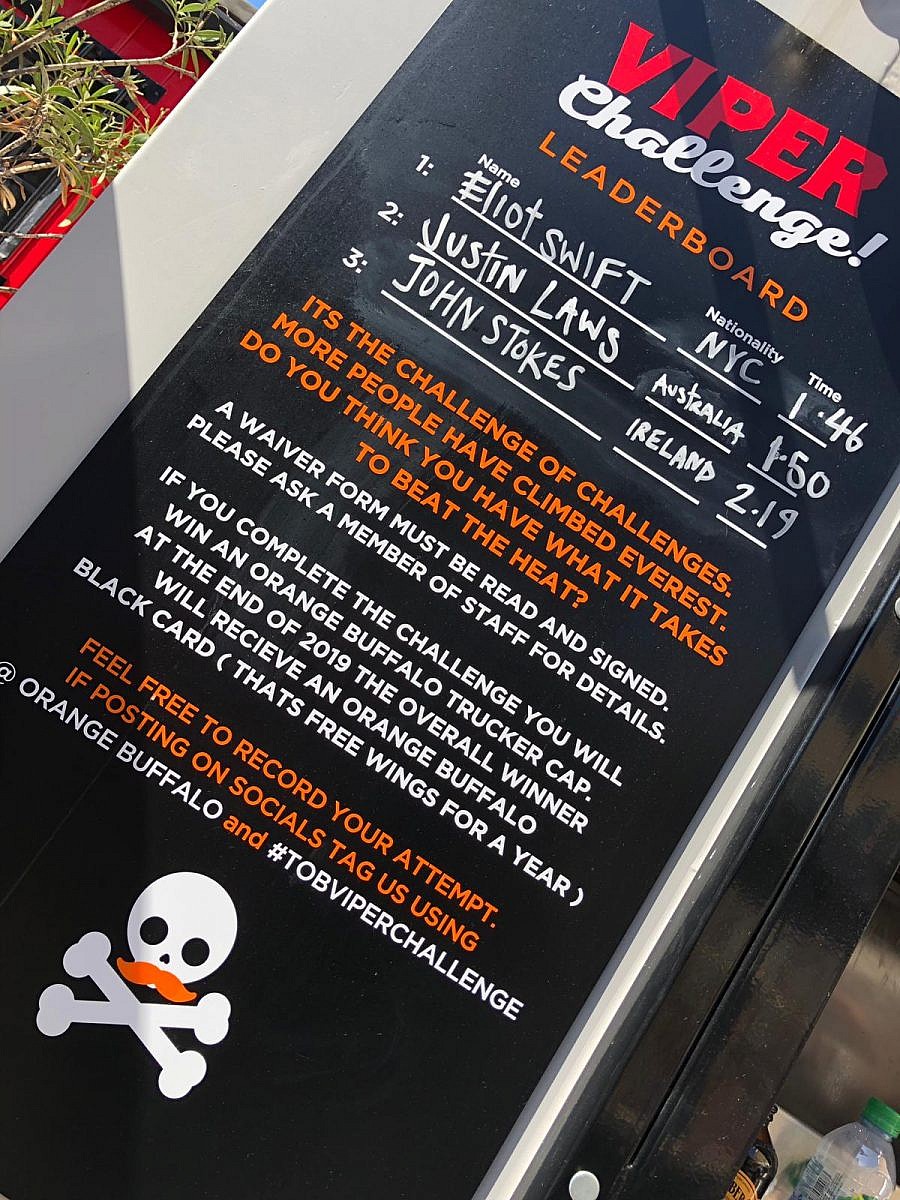 5 mins later, the wings arrived, the colours from the sauces on the chicken were so vivid, almost artistic, orange and yellow, glistening in the Shoreditch sunlight on a day that could be confused with summer. 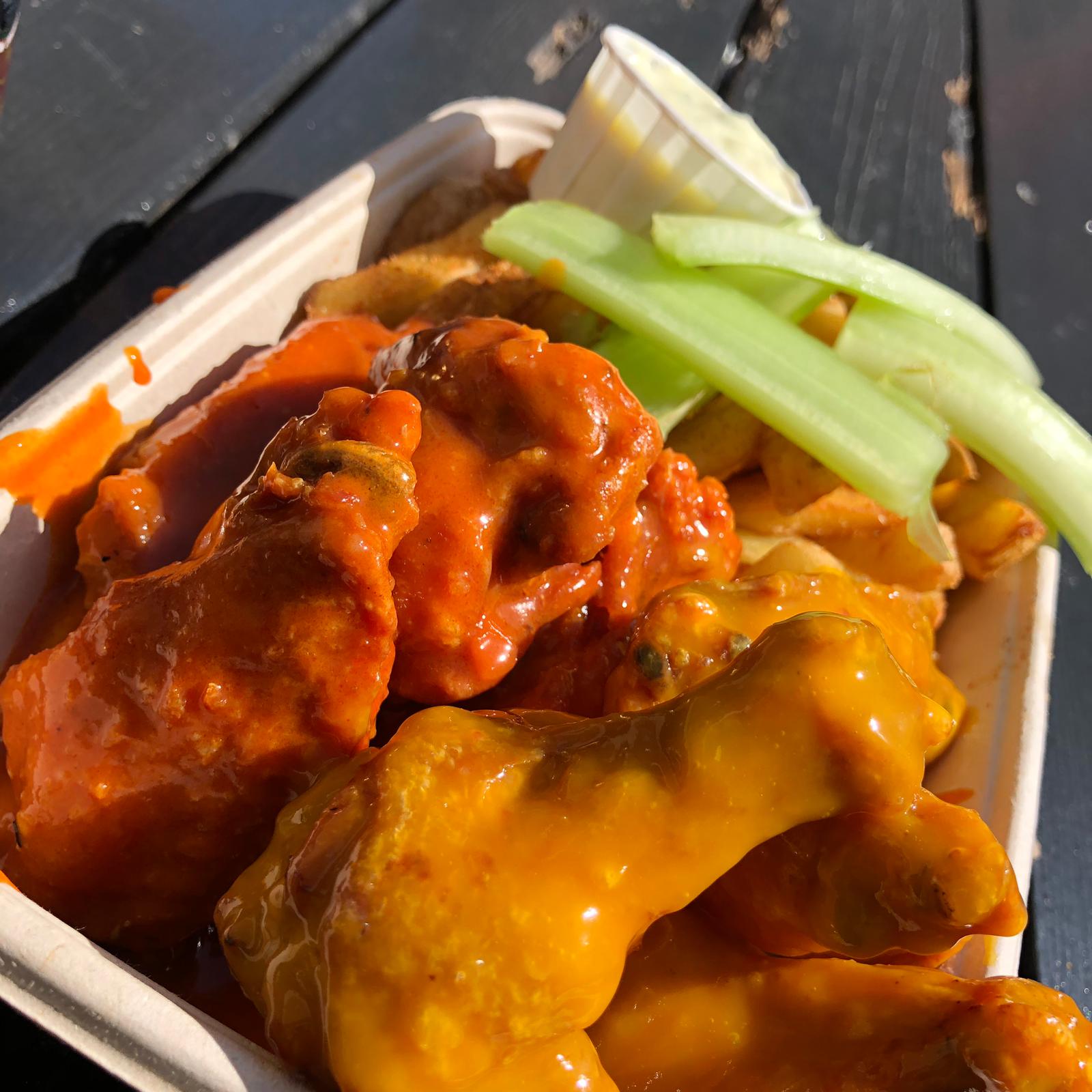 The first batch, ‘K-Town’. Admittedly the first bite and flavours took me back, I think I actually coughed. Not due to them being spicy, more so due to the taste explosion, amazing, tangy, spicy but not too spicy. I was still able to taste the chicken. I even thought to myself how fresh the wings were and how the grade quality of poultry shone through. The wings still had that buttermilk crisp to them suggesting the craftsmanship was “up deh” (You May need to ask someone from the Caribbean what that means) I will say from now if you do not like buffalo they may not be the wings or flavour to go for, but if you are a buffalo wing flavour eater you may not find a better buffalo wing in London!

The second flavour was the darn hot “Vincent”, I actually expected to have my head top blown off with heat, and to be sweating uncontrollably like the man sat on the table opposite me, but no, that didn’t happen. They are obviously hot but not unbearable. The Vincent flavours is based on the mango fruit, which to me confuses the senses. Listen, they taste good but the sweetness of the mango almost nullified the spicy nature of the sauce on the wing, but again the wing as a package is top level, not better than the K-Town, but better than a lot of wings I have tasted during this campaign. For me, from a stance of buffalo favoured wings, The Orange Buffalo is top three in London, so far, but remember that’s for buffalo wings alone and Mr Whyte is on a solo mission to Butchies… 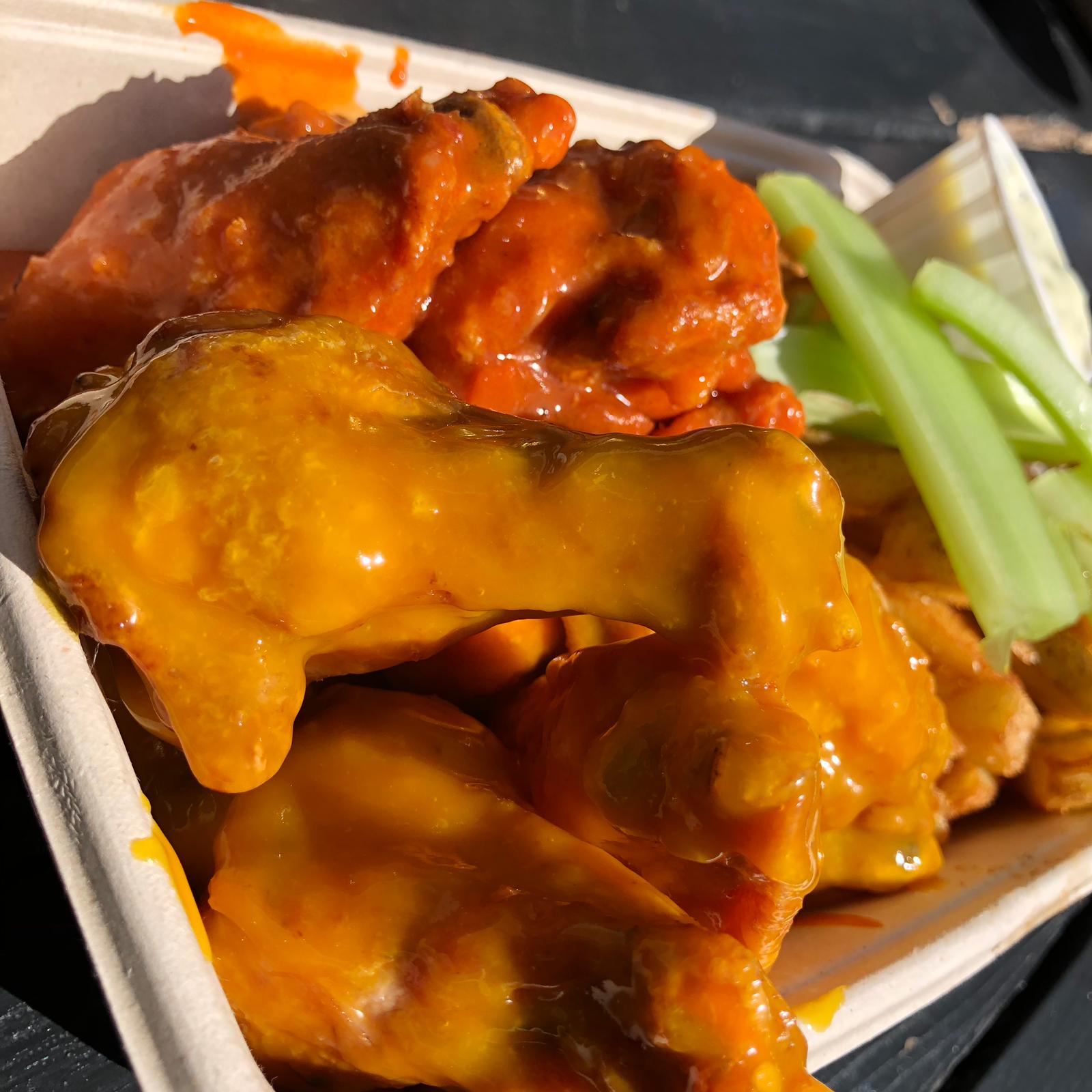