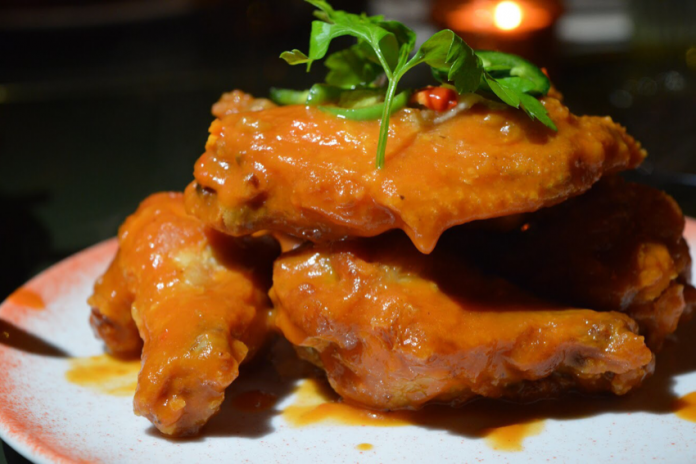 A long overdue revisit to Clutch. Mr Whyte has been going on about the chicken wings at Clutch since he last visited with Rain, almost 18 months ago. With our ‘Best wings in London’ campaign in full effect, it was only right we included Clutch in the equation.

The elements we are looking at for the best chicken wing in London are:

Let’s proceed to the menu and check out the variety on offer! Clutch has 3 choices of wings, we had to try them all! Honey Butter & Sesame, Naga Fire and Soy Garlic Glaze.

Will Mr Whyte’s claim that Clutch have the best wings in London be confirmed by the rest of the man dem? Or is he living the past? 18 months is a long time, a lot can happen, new menus, change of chefs, different suppliers of chicken, etc.

As I walked towards the restaurant from Hackney Road I could smell the aroma of the chicken being freshly cooked. You don’t get that from Nando’s so the anticipation of tasting what was on offer was making my stomach growl.

We were shown to our table in the back which is very plush. A sexy bar with ambient lighting and all your favourite branded liquors on display. It reminded me of how the gauchos restaurants are set out but with the latest hip hop bangers playing in the background. I had to stop myself from consistently nodding my head to the beats.

The Naga Fire was my favourite by far. The waiter told me they were super hot so at first I was a little shook to try them but I thought what the hell, I’m going in and unknowingly, they were an adaptation to buffalo wings without that strong tangy Tabasco sauce. These were much milder than your typical buffalo wings but still maintained the kick you want from them. I was expecting something to burn my mouth to smithereens however I was happily presented with a set of wings that I would definitely go back for. They were not hot at all. The soy garlic glaze wings were too salty in my view but I think that’s down to the soy sauce itself.  It was overbearing for me. The honey butter and sesame wings were my least favourite to the point they were easily forgettable. All I’m thinking about are the naga fire wings!

I can still taste the flavour of the wings from when Rain and myself visited Clutch in 2016. The best wings I have ever tasted but don’t ask me what they were called!

18 months is a long time, who would have thought Theresa May would be negotiating a Brexit deal, who would have imagined Man United would sack #josemourinho and be 6th in the #premierleague?

Wings galore arrived. I dived straight in for a Honey Butter & Sesame wing. This looks closest to the one I remember but, it looked different. Gone was the small but tantalising wing in 2016, instead was a bigger, flat wing. The 2018 version was cooked for longer, sauce was sweet but it left an aftertaste I didn’t like. The chicken could have been cooked a tad shorter.

The Soy Garlic Glaze. Maybe I had a wing with minimal sauce but it was bland. Now and again I got slight hits of what could have been a fab sauce.

Chicken quality was top notch, but overall there are better chicken wings out there.

This visit has been 2 years in the making for me. I missed the first visit back in 2016 and needless to say I was dismayed, because the way Whyte been going on about these wings I feel like I missed the Holy Grail of chicken wings. To say I was looking forward to this visit is an understatement and the smell wafting from outside the restaurant didn’t suppress my anticipation.

The wings came and whilst I was trying to work out which was the ones Whyte had been bigging up all this time, the rest of the man dem just dived in! Wait… leave some for me, man!

I tried the Naga Fire wings first but with a name like that I had to let ‘Mr Experimental’ Speedie taste them first to assess the heat levels. They looked like your average regular Buffalo wings, with that bright orange sauce but tasted very different. I hate buffalo wings but these I liked. Cooked and seasoned well. You could taste the crisp edge and succulent meat under the sauce which had a sweet, zestiness and a slight kick. A good offering from Clutch kitchen.

Next I tried the Honey Butter & Sesame, these were the ones Whyte had been going on about. Another good offering, meaty and sweet but just nice, definitely not the best and not worthy of the torment I’ve had of missing out on them previously. Another Whyte let down!

Finally, I tried the Soy Garlic Glaze variety… these made me stand up and take notice! I took a bite and felt my face change to that “Raahhh where have you been all my life?!” kinda look. The combination of the soy sauce, hint of garlic and a minimal sweetness this sauce had, fit well with the fact that the chicken was fried (no coating) underneath it. For me it was the best of the bunch! These are my firm favourite of the three. I would definitely come back for these.

RAIN: In addition to the chicken wings, clutch also have a boneless option which has one extra flavour, but for now, let me concentrate on the wings.

Honey Butter & Sesame: Very tasty and what I mean by that is the honey butter they used was sweet but not overbearing, the sesame seeds were to only have the taste of sesame on the wings and that was a sprinkle so it didn’t overpower the sauce and more importantly the taste of the chicken. I’ll state this from now, the chicken quality at Clutch so far, for me, is the best. The only rival would be the guys over there at White Men Can’t Jerk.

Naga Fire: I was excited about these, spicy or hot who cares, I kinda got pulled in due to the word Naga meaning snake or serpent in the ancient language Sanskrit, ok, ok I digress! These were supposed to be the hottest on the menu, Speedie always compares the hotness of a hot wing to the Nando’s scale which to me is not hot what so ever! In fact, extra hot at Nandos is medium in reality, it’s a minor, anyhow back on track. The wings were almost like a light buffalo flavour, but not tangy, after one bite you could taste the spicyness, but wasn’t scotch bonnet heat levels. To me it was pleasant, you couldn’t give them to a toddler but you could eat 4, 5, 6 easy without having to drink water! These were my favourite and I would venture back just to have them!

Soy Garlic Glaze: Rich in flavour and well coated, the Soy Glaze were perfect to look at, and also perfect to taste… at first bite! After the second and third bites, for me, the taste became too much. Soy sauce is very distinct and full and these wings were almost like they were dipped in soy sauce and then something else. If you’re not used to rich flavours you may want to pass on these, or just order a small portion.  One of these wings for me is enough but if your partial to soy sauce then these may actually be the best thing you have tasted.

SERVICE: Our waiter, Dave was on point and knows his stuff! Knowledgeable about the items on the menu with particular detail to the wings. He was attentive, polite in his service and seemed to know just the right time to touch base with our table. Clutch, you have a good one there! Another waiter dealt with our drinks (we didn’t catch his name) but he was nippy with some prompt drink arrivals subsequent to ordering. We must add though, that having said all this Clutch were expecting us so we don’t know if this was genuine, general good service or if it was “that good” because they knew we were in the building.