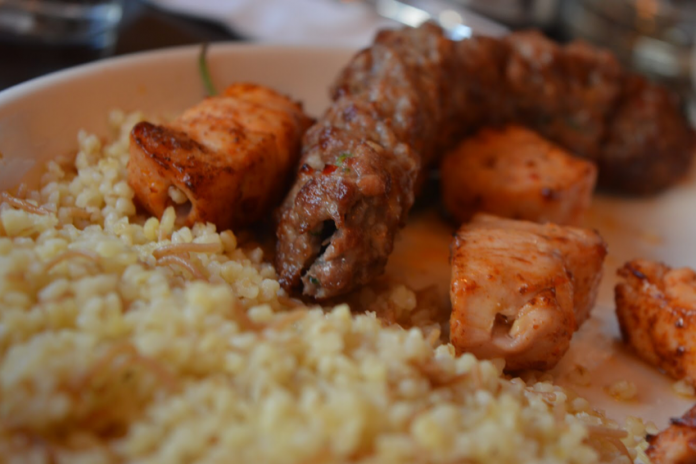 We thought the journey to find the best Turkish restaurant in London was complete, but out of nowhere, a curve ball gets thrown into the mix, Umut 2000. Sounds like the next terminator. This restaurant was highly recommended by a Turkish uber driver who was schooling Mr Whyte on Turkish restaurants. Allegedly Umut 2000 has the best Turkish food in London, better than Gokyuzu!. As far as the Man Dem are concerned we don’t know this driver so this is on Whyte’s head and his neck is on the line if it’s not up to scratch. For his sake we hope it is. Fingers crossed…

STARTER: As we are waiting for our main we were tantalised with the traditional Turkish bread, Cirrik  and salad, and meh, it was average. The bread didn’t seem freshly baked and we’re starting to wonder if only a few Turkish restaurants actually bake bread fresh on-site, or are they all brought in to save time and money.

The salad, again, average and it reminded us of salad that was poured out of a salad mix bag that you buy from @Sainsburys or @Tescofood but umut 2000 add vinegarette to give that authentic’ish’ taste! Well let’s hope the main doesn’t turn out to be as average as the bread and the salad.

SPEEDIE (aka Pepper Man): As I arrived I saw a nice modern looking Turkish restaurant on the corner. It was busy with lots of people inside. I was thinking this looks decent. It probably was, however, this isn’t the place we’re going to. Walked past and directly opposite is where you find Umut 2000. One dusty, run down looking takeaway with a few tables. I thought this was a set up. There was no one in the restaurant. Everyone was eating at the place across the road. This is not looking good.

The rest of the mandem turned up and then we all got our orders in straight away. Mr Whyte ordered his usual Lamb Adana and Chicken Shish mix. I weren’t taking any risks with this place so I just said “what he’s having and a bottle of water please”. By the way, payment is cash only but there is a Tesco express 2 mins away with a cash point.

When the food arrived, I looked at the plate and almost shouted out “what is this? The plate come like some gourmet Michelin starred restaurant, where the chef is more concerned about how the food looks on the plate, over the portion size, thus giving you a minimal amount of food. However, Umut 2000 effort was just minimal, the presentation was poor. The meat was spread all over the plate, salad dashed in the corner and rice sprinkled in the middle. Are they serious?

I tuck in and my gosh, what a surprise. The chicken was actually good, the Adana was top notch and I boxed off the salad quick fast after picking out the onions. A few too many for my liking and I didn’t have gum this time. Looks can be deceiving because the portion size was perfect. It filled me up just right. Everything about that meal was good. No complaints from me. Moral of the story, don’t judge a book by its cover.

The main arrived, and it wasn’t pretty. What I mean is, Speedie was right, it wasn’t presented well. It’s like the chef cooked it and plonked it on a plate! I’m not saying it needs to be plated up to Michelin star level but some effort is needed. I mean we eat with our eyes, don’t we!? Rain

WHYTE (aka Cheese Lover): You know the drill. Chicken Shish and Adana Kebab. No need to see menu.

Generally, chicken is well cooked at Turkish restaurants, Umut’s is one of the best. The food took long to arrive but you tend not to mind when it is this good! You know like when you have to wait extra long for #LoveIsland on a Sunday because @itv doesn’t show it on Saturdays. But Sunday’s episode makes Eastenders’ #Christmas special look like an episode of Songs of Praise and you quickly forget the long wait.

The chicken was tender and expertly seasoned. Matching @Selaleuk. If I am asked where to go for Chicken Shish I will be directing people to Umut 2000.

Now on to the Adana. My specialist area. First impressions, the usual log of minced lamb instead arrived in broken pieces. But as I get older I try not to judge books by their covers.

The flavour was quite good. Again expertly seasoned. Certainly better than your average Adana Kebab. However, something was missing for it to be considered number 1.

): I was actually looking forward to this review because of the source of recommendation being an actual Turkish person. I had hoped to eat some authentic Turkish cuisine as close to Turkey as possible. Upon browsing the menu, the vegetarian grill caught my eye and my belly said, “Yes! That’s me!” Skewers of peppers, mushrooms, red onions and aubergines…… sounds good! I also chose the bulgar wheat to go with it.

However, the crazy thing about this dish which made even The Manager’s eyes open up wide is that the veggie grill cost more than the meat equivalent! Errrmmmm… HOW? They also said that I would have to wait 20 minutes for them to grill it. I don’t get it. I thought vegetarian dishes were easier and cheaper than regular meat dishes?!

It came within the specified timeframe they said it would but still 20mins for veg… that just doesn’t sound right to me, then, after all that the food was plain! They could’ve used some sort of spices or seasoning on it, but nope! It’s a good thing I’m a whiz with salt and pepper!! The bulgar wheat was average. @Gokyuzu is still winning in my view. #justsaying.

RAIN (aka The Manager): Not even on the beaten track, this place is off the main road, and I’m not gonna lie it looked iffy to me. This place came on recommendation from Whyte’s following an uber ride, and we know what his track record is like! Did someone say cough…Mangal (read review)…cough?! Anyhow, let’s try to rise above those previous misfortunes and have an open mind.

I stepped into the restaurant and the other Man Dem were hitch up in a corner, talking some mess probably about the #WorldCup. I was unimpressed with the decor and there was no air con but hey to have an open mind, eh! Keeping in theme with what I’ve always ordered I went for the Mixed Grill. I’m hoping that regardless of the location and initial look of the place the food in regard to taste was out of this world, one of those hidden gems that we seem to find.

The main arrived, and it wasn’t pretty. What I mean is, Speedie was right, it wasn’t presented well. It’s like the chef cooked it and plonked it on a plate! I’m not saying it needs to be plated up to Michelin star level but some effort is needed. I mean we eat with our eyes, don’t we!? The Mixed Grill comprised of lamb ribs, lamb kofte, and a lamb shish, compared to @gokyzku_restaurant the portion was shy man! Shy meaning, small, not enough, smaller than other places, even the rice was shy! You would have thought for the price they could have given more rice to excuse the fact that the meal was light on meat! It didn’t even come with a chicken wing!!!!! That’s like giving someone a glass of cider with no ice, some things you just don’t do!

So let’s break this down into taste! The Adana, admittedly was real good, well seasoned, and cooked well through with the addition of the chilli sauce and I would actually rank it top three out of all the places I have visited, it seems like they actually had onion diced and rolled into the minced meat which gave it that little extra flavour.

The Lamb Ribs, again, well seasoned but seemed to be more fatty than other places. Like two bites and it was done! Leaves you thinking what’s the point, not that I’m complaining as they did taste nice… all two of them! Then the Lamb Shish, to me on first taste they were awesome, then on second taste it seemed over cooked but with the addition of the chilli it made it taste like they were seasoned and made in Turkey! Overall, Umut 2000 is ok. I wouldn’t leave the beaten track to visit. If I were drunk, or on my way to meet the Man Dem before a football game I’d pop in, however, if I was on a date, 1st, 2nd, 3rd or 4th I’d avoid like the plague as the person you are courting will probably start a life with the person that takes her to Gokuyzu!