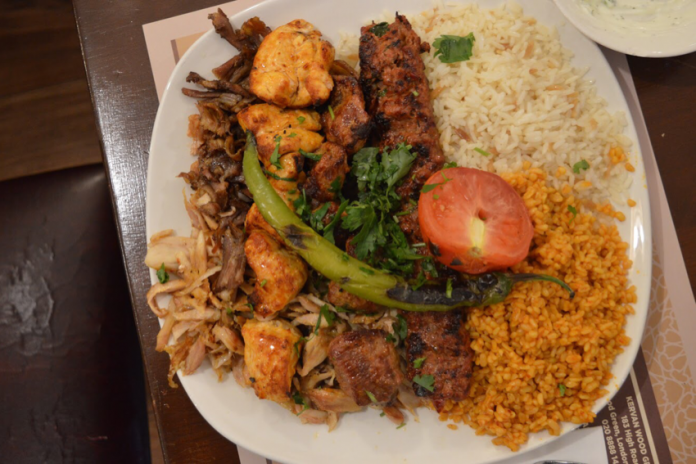 For some people, and the @mandemvfood team, well all except Rain who reckons his journey started at @Gokuzyu_restaurant (we’re still not sure if we believe him) their first experience of Turkish food started here, Kervans… the mecca! The place that put Turkish on the map… the place that was the “go to” place for Turkish back in the day.

People (including the majority of us) used to travel from near and far just to come here, even if out of their way but we haven’t been here in so long we can’t even remember when the last time was! Let’s see if @KervanSofrasi_ helps us relive the memories of yesteryear…

RAIN (aka The Manager): I will be covering the starters. Battle of the Turkish restaurants to find out which is the best, first test! The bread! Historically the bread at Kervans has always been top notch, warm, fresh, dough like fluffy ness if that even makes sense! But on this occasion no, no, no, no, no… no! It just didn’t cut the mustard, yeah it was alright but man, I expected more, I mean previously this had been the best for bread out of all the places I had been to! Or is it that “in my youth” paradigm where when you first taste or experience something, that memory makes every other event which is the same worse than the initial event? Confused? Don’t worry, let’s talk mains.

Errrmmmm… first of all, what happened to the glorious looking meat mountain of a platter I definitely remember previously getting?! Second, was the lack of ingredients… there is NO chicken wing(s), NO lamb chop(s) or my favourite lamb ribs… this is a MOCKERY!!  Tongo

I’ve kept it simple. When doing these reviews you may notice I’ve always gone for the mixed grill, no change here. One thing I’ve been amazed about in all Turkish restaurants we have been to is the speed that they cook the food and bring it out, 19 mins is probably the longest I’ve waited which is fast if you think about it. It arrived as a steaming plate of meat, rice, (two types) and seasoned bread. In reverse order, the ‘season bread’ is a name I’ve given it, in a nutshell, it’s bread baked in the normal way but they use the juices from the meat on the grill to give it extra flavour. If the bread is fresh this is all you need in your life! I then move on to the rice, bulgar and normal long grain. In other places the rice has been over cooked, borderline soggy but not here. A nice texture, well cooked with a little something added for good measure, the lil something maybe a chilli salt, or just sea salt, either way it tastes good, did I mention that you got both types in the mixed grill?!

Now the meat, Adana, I want to say perfect but it wasn’t. To the untrained palate it was good, some may say great, but in comparison to other establishments it was lacking. It was well cooked but the flavour was missing the kick, almost like the secret ingredient was missing, which was disappointing. Not great, but ok… just ok. The mixed grill also came with chicken and lamb shish. Now this was something, well not by itself, add a lil chilli sauce and this was amazing. Yeah, I eat a lot but it’s all for the love of the job!

WHYTE (aka Cheese Lover): I haven’t been here for years. One of the original Turkish spots. Last time I was here I ordered a mixed grill but instead got half a plate of doner meat and bulgar wheat. Safe to say, I haven’t been back since!

Sticking to my ongoing theme, I just ordered a small Adana Kebab and Chicken Shish without viewing the menu.

I must say, all Turkish restaurants have consistently cooked chicken shish to a similar good standard. As a half Jamaican I have accepted I will never be 100% satisfied with Turkish chicken. It will never be seasoned enough. I am ok with this. But it must be thoroughly cooked, tender and piping hot.

Kervan’s chicken shish met all of the prerequisites.

After @Mangal_Ocakbasi’s disappointing adana kebab, I am on the search for a new adana spot. It won’t be Kervans, whose effort was acceptable, but I am looking for outstanding.

This lamb had some flavour, probably would be great for a Turkish food novice, but experts will know there is an outstanding Adana Kebab somewhere out there.

SPEEDIE (aka Pepper Man): We’ve finally made it to the infamous Kervans (Church Street, N9 branch). This is the one Turkish restaurant visit I’ve been most looking forward to. You only hear good things about this place.

On first glance of the menu you automatically look at the grilled food part. It wouldn’t surprise you that I went a bit left field. I stayed away from the norm and opted for fish. I ordered the Seabass fillets. Didn’t bother with the whole fish as I can’t deal with the bones. The meal came with mash potatoes, stir fry vegetables and a salad.

Everything was perfect. These guys kept asking me how it was, I couldn’t even answer as my mouth was full of goodness. I literally didn’t speak until I had finished the plate. The mash was creamy, not runny or thick like dough. You could tell it wasn’t smash or that instant packet stuff. (I hope it wasn’t anyway). I couldn’t fault the fish or vegetables. The food was that good I’m now considering becoming a pescatarian. ??‍♂

If you’ve never had fish in a Turkish restaurant before, I urge you to do so at least once. You will not be disappointed.

TONGO (aka Sweet Tooth): On this Best Turkish campaign I have stuck to ordering mixed grills, 1, for consistency; and 2, for ease of comparability, this was no exception. When my meal arrived the first noticeable difference from my vague memory of this dish was that it came on a plate!! Errrmmmm… first of all, what happened to the glorious looking meat mountain of a platter I definitely remember previously getting?! Second, was the lack of ingredients… there is NO chicken wing(s), NO lamb chop(s) or my favourite lamb ribs… this is a MOCKERY!! What is on this plate (still can’t believe it’s only a plate) is: lamb & chicken shish, lamb adana, rice AND bulgar wheat #pause sorry, what?!? Why is there both rather than either, or?!? And then as if to add insult to injury one bagga chicken and lamb doner meat! What kinda tomfoolery is this?!?

Already disgruntled I begin to eat… doner first. These man are cussing me now “Bro what you doing? How you adding salt to Turkish?! Boi, I’ve never seen anyone add salt to Turkish before ya nah, mad ting!” Well, the doner needed salt, (or should that say flavour?), either way, whatever it was, it needed it! I then tried each of the meats in turn and I can only say what a let down. Don’t get me wrong they tasted ok but nothing outstanding, just like any other normal, standard, everyday Turkish. Nothing was reminiscent of the Kervans of old, when I used to relish any opportunity to go there.

In my opinion Kervan’s has dropped immensely from its position as one of the “go to” places for Turkish food. I’m not saying I will never come back here but it is more likely to be because I am in the area and someone else wants or suggests it and to be honest even then, I’d probably counter suggest going to @Capital_Restaurants round the corner instead.

SERVICE / OVERALL: From our visit it seems, this branch of Kervan have let themselves down. On the whole it just isn’t what it used to be. Maybe it has something to do with that paradigm Rain mentioned earlier, who knows but there was something.

The service was mediocre, at best. The staff spent the majority of the time they actually spent around our table due to the fact we were streaming a #WorldCup game and wanting to get a quick glimpse or a score update. They didn’t even check if all was ok or if we needed anything else during those snapshot visits.

As for the food, they have got ‘economical’ with the portions and have reduced the size and / or inclusions within the dishes which just makes for an overall disappointment as if you have been here previously you feel like you are getting conned.

If the taste and quality of both food and service were of a higher degree then this would balance out but as it stands it doesn’t feel like value for money. Maybe Kervan have heard about their notoriety and have got complacent or maybe that same paradigm had us all fooled from the beginning. Either way it was a let down.