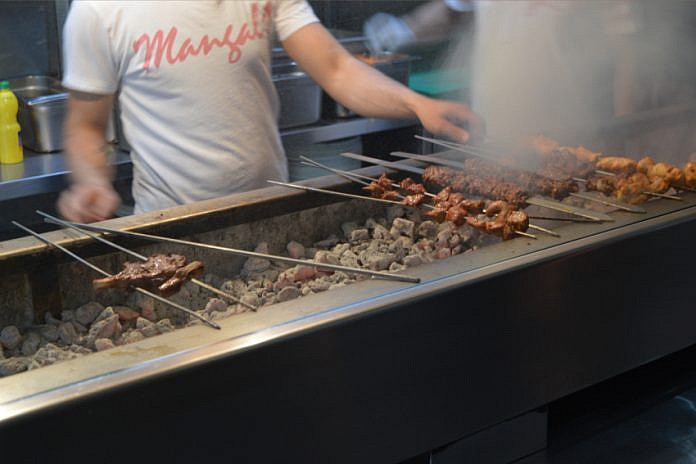 Arcola Street in Hackney! To most, this road means nothing. To others, it’s a reminder of a time when people would flock here for an “Under 18 shoobs” (slang for a rave). For the @mandemvfood it is home of the famous “Mangal”. Well, famous because Whyte says it’s the best Turkish for taste in London. He’s been bigging up this place, especially it’s Adana Kebab for a few years, so now it’s time to put it to the test on our #BestTurkish restaurant in #London campaign. Will it be all that Whyte’s made it up to be, or does he just not know a good Turkish when he tastes it? Whyte your reputation is on the line!

STARTERS: Cut to the chase, an embarrassing start, the bread we got as a starter (even though it’s free) was terrible! Dry and burnt. So much so that Whyte had to call #bossman and ask for some “fresh” bread, but this was from the same batch, because it also was also dry and burnt. Points deducted already. This place is killing the vibe (or hunger) like the @KendrickLamar tune!

One thing that works in Mangal’s favour is the Cirrik, Rain’s no expert but he liked it. Smooth, cucumber and the yogurt perfectly aligned, just a shame that the bread was rubbish! Like a burnt piece of cardboard that…. ok, ok I’ll move on.

RAIN (aka The Manager): Now I never take anything on face value so had to try it for myself. The reason we came was not for the bread, even though for me the bread is 25% of the score, we came for the meat! The chicken, the lamb the Adana etc.

To ensure I got the full experience….. swift on arrival the mixed grill appeared. I saw Whyte’s eyes looking at my plate nervously as I took the camera out to take some shots, and the first thing I noticed was the chicken wing! Nope that’s not a mistake, chicken wing, one, uno, singular! In my mind I’m thinking what’s the point. Regardless I took a bite, and it was mediocre at best. This place is supposed to be top notch, but for me the chicken wings were the same quality found in a Newcastle kebab shop after a night out. Disappointed, I moved on to the rest of the plate. There were several lamb cuts and lamb Adana remaining! The Adana was sold to me to be THE BEST in London! Hmmmm….

So the lamb cuts, I want to be more descriptive but they were ok, nothing fantastic, a positive is that they were well cooked, but the seasoning was bland. I could taste it but it needed a kick up the …… well you get the message. Thank God for the chilli sauce, it made the meats taste better than they actually were. Anyway, on to the chicken shish! Oh wait there was NO CHICKEN SHISH in this mixed kebab! On to the lamb and chicken doner! Oh wait, there was NO lamb or chicken doner! Was this a mixed grill or something else? Did I get bumped (early 2000 slang for conned) man, I was even more disappointed, but there were two lamb ribs, “psh!” Is all I can say! Still disappointed, in the battle for best Turkish this is not top 3! Hell, it might not even be top 6 and there are only 6 contenders!

WHYTE: Mangal, my local, my go to place for the best Adana Kebab in London. One of the original restaurants to take Turkish food mainstream.

I have always vouched for Mangal, you know like those who say “My Mum makes the best macaroni pie in the world!” Despite only ever tasting their mum’s macaroni pie… Well I am pretty confident Mangal will at least make the top 3 in the Best Turkish in London campaign and I have tasted food from many other Turkish restaurants, including some in Turkey!

Keeping consistent, I went for a small Adana Kebab and chicken shish mix. Both arrived and I dived straight into the Adana Kebab. My anticipation levels were at 100%. I was already writing the review in my head before taking my first mouthful… “Mangal make the best Adana Kebab. This is how you are supposed to cook minced lamb, seasoning throughout the minced lamb, not too oily and fresh from the Ocakbasi grill.”

However, after my first mouthful something wasn’t right, the lamb seasoning was absent. This was instead a bland log of minced lamb. Maybe the chef was having an off day and the seasoning missed the small section of the Adana, or they had installed a new grill which hadn’t yet been broken (not an excuse lol, this has happened before). The review in my head was beginning to change.

Unfortunately, the second, third, fourth and fifth bites didn’t make any difference to my ever changing review. The words “seasoning” and “best” had been permanently deleted.  My face looked more distressed than when the Queen was caught staring at #MeghanMarkle during the #royalwedding ceremony. The lamb was tasteless, a total lack of seasoning.

I couldn’t look Rain in the eye. Complete let down.

The chicken shish was on a par with other Turkish restaurants but still not a match to @SelaleUK. Succulent and hot.

Based on today’s food Mangal will struggle to make top 3. It was good while it lasted but I can no longer vouch for Mangal cooking the best Adana Kebab and I now will be seeking other Turkish restaurants to couple up with #Loveisland.

SERVICE: Service is and always was patchy. Never feel settled and sense the main priority is to flip as many tables per night instead of giving diners the best experience.

In the past, the fantastic food made you overlook the patchy service. But when the food is average you begin to wonder if Mangal has become complacent and is living on its name.

OVERALL: As much as we slated this place it was more because in the past it had been a hidden oasis of meat, more so Turkish food, in the past the bread, the portions and the flavours were rivaled by a few, now this seeps down this list and possibly should not even score. The service was average, sure they changed the bread from the dryness they gave us in the beginning but the point is why did they give us the dryness in the first place.

Positives, I guess is the food seemed to be well cooked, and came in a speedy, timely manor. The fact remains that it was poor and a shadow of its former self, Mangel needs to revisit what made them great in the old days and bring that back. Even sitting in the restaurant it didn’t have that same buzz that we remember from a few years back and with that the score will be a a poultry one. It’s hard to rate so harshly but it is what it is.