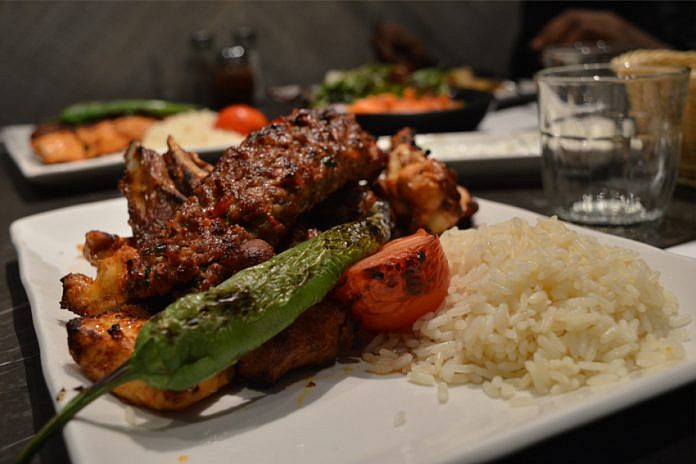 Not the overly busy, tourist one on the A406. (Oh you don’t know about it, don’t worry we can’t all be Turkish restaurant veterans like us!). Anyway, moving on we’re talking about the flagship main one on Green Lanes, you know… where it all started.

We’ve spoken to a few people about their opinions on the best Turkish and the majority said we had to come here. The people have spoken so here we are….

RAIN: I had always driven past this place after the refurb but never managed to pop in, but as we are looking for the #bestturkishinlondon it was my duty.

Any Turkish restaurant veteran knows starters are at your own risk as you get bread, cacik and a portion of salad. Now me, I don’t care for the salad so I went straight for the bread, the bread test. Historically as the mandem have mentioned before, the bread is important, needs to be fresh, warm and doughy (is that a word?). Anyhow, some restaurants serve dry cold bread but not Gokuzyu, the bread was warm (ish) and cut into big chunks, one thing I did notice was the bread oven was not the traditional oven they had before, maybe I’m wrong, but regardless the bread was good! Here’s a tip, garlic sauce, pepper / chilli sauce on your plate and dip the bread in!!!!!! Thank me later! 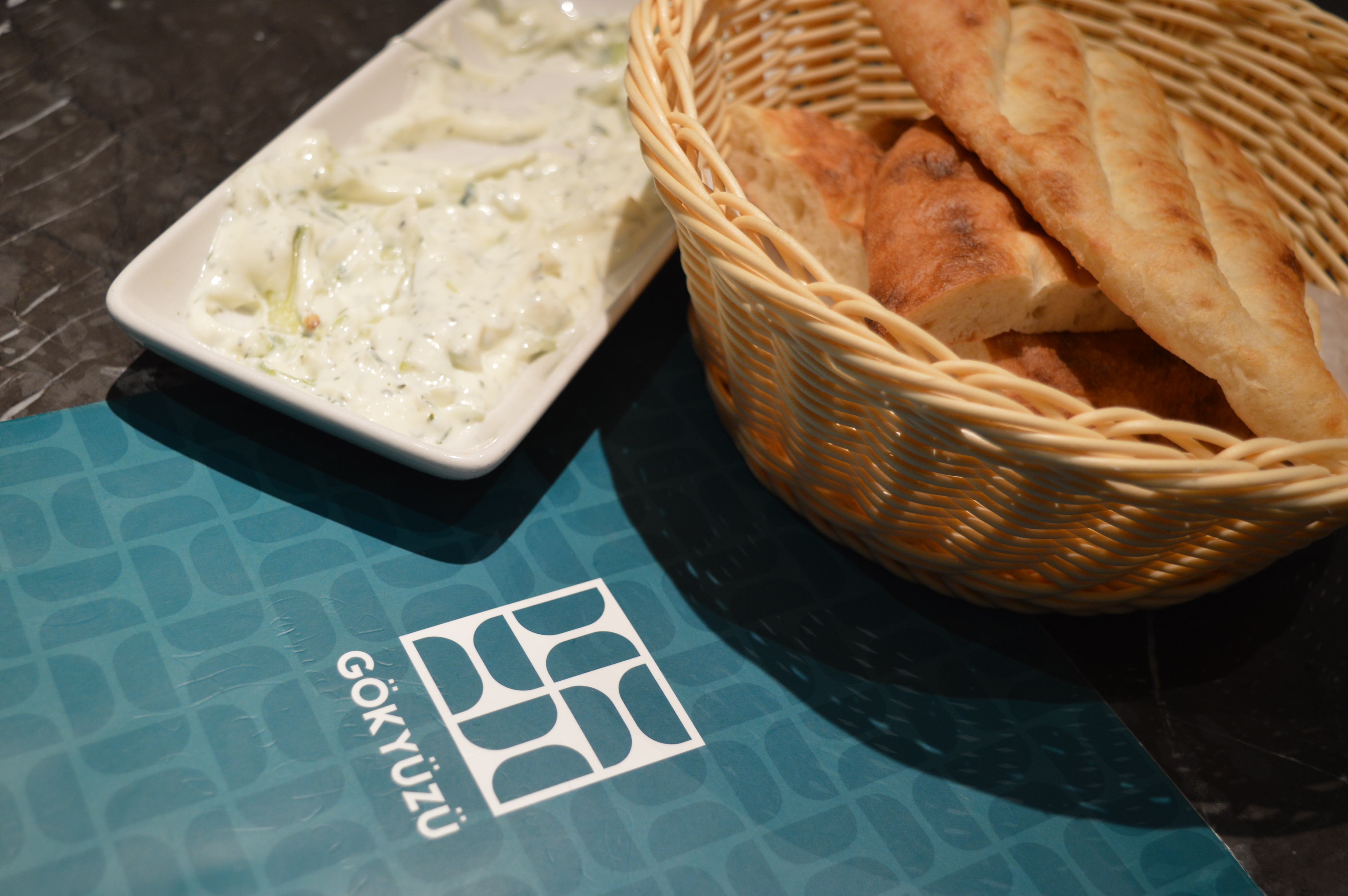 For the main, I wanted a variety but wasn’t that hungry so ordered the mixed kebab, or in some places, the mixed grill, as this has a mix of all the best bits of Turkish food (pardon my ignorance). I’m a growing lad so did consider the jumbo platter but as I said I wasn’t that hungry! One thing I will say about Turkish restaurants in general is that the service is impeccable, lightning fast and polite at the same time. I digress, the mixed kebab consisted of two ribs, two chicken wings, chicken shish, lamb shish and an Adana kebab with some white rice for good measure.

In my head I always do a little dance when the food arrives and this time was no exception, freshly cooked, and presented well on the plate, first thing to taste was the lamb and chicken Shish…. OMG! The taste sensation was similar to the feeling I got when I saw #Thor appear in #Wakanda during the Infinity War, relief, excitement with that “Ahhhhhhhh” moment. The chicken was cooked perfectly, not dry, not under cooked, just perfect, the seasoning was also spot on. Some Turkish restaurants tend to compensate for lack of taste by adding more salt within the seasoning, which stifles the taste of the chicken and lamb. The lamb again perfect, tender, juicy and well cooked like little bites of heaven coming off your fork. If there was a complaint it would be that you don’t get asked how you would want the meat buuuuut… The way it comes is fantastic! 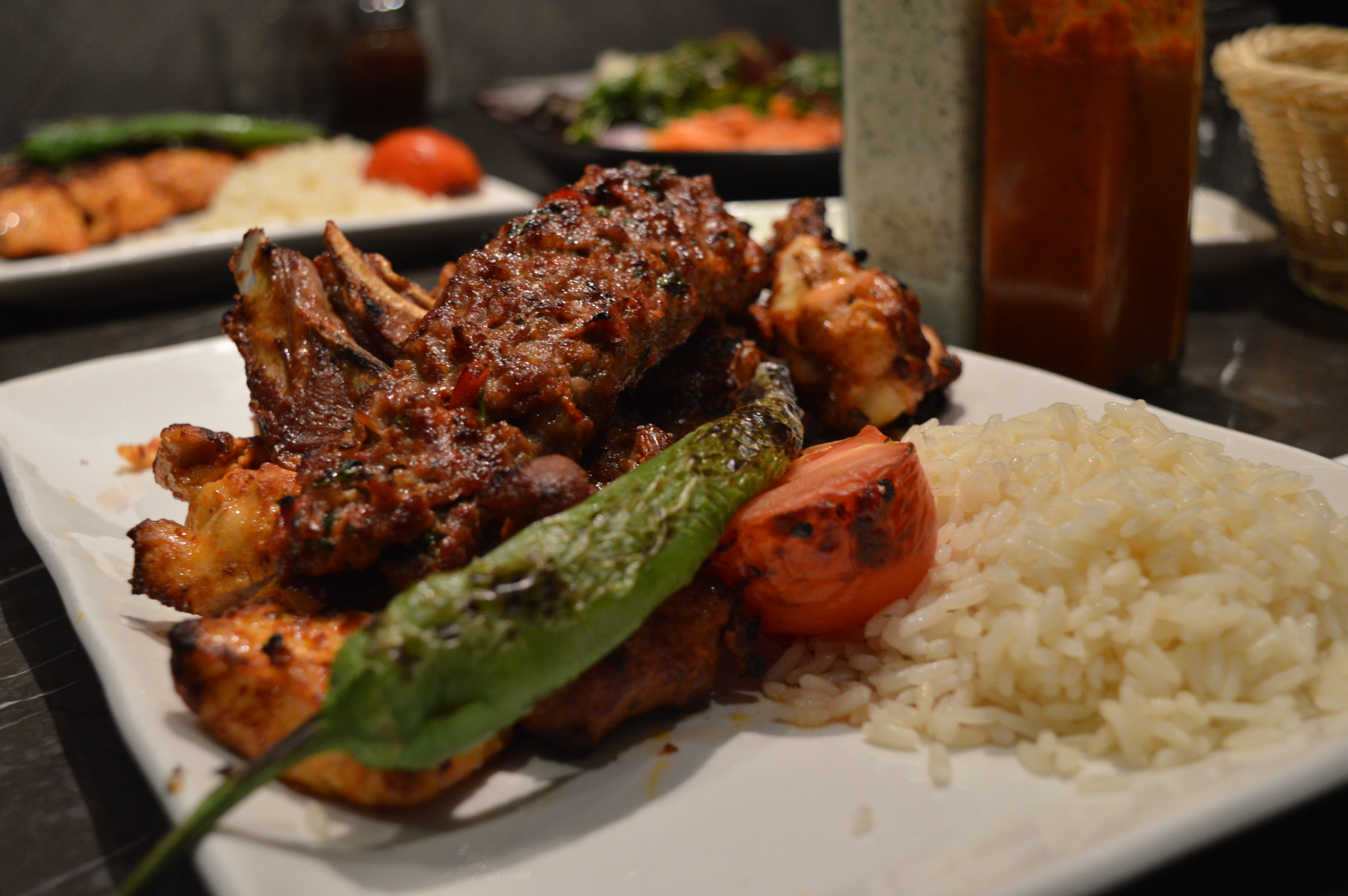 The chicken wings, you get two, or one, it depends how you see it, you get a drum and a flat, forget the detail these mofos tasted sexy! You have to eat these with your hands and if I was that way inclined I’d be sucking the bone as well. The meat, again cooked to perfection, the quality of the chicken was perfect! I’d assume the better quality of chicken, the easier it is for the seasoning to marinate. These wings were that good that I could eat a portion of these by myself, hmmmmm thinking about it maybe two portions, I know, but as I said, I’m a growing lad!

Now the Adana, in 2016 Mr Whyte said to me that blah blah on Arcola Street did the best Adana Kebab ANYWHERE! But I’m thinking he’s wrong, and the best is actually made here at Gokyuzu, in essence it is mince meat with herbs and spices but these herb and spices and the minced meat used fused together like #Beyoncé’s vocals on Jayz’s Family Feud track! How many times can I say perfect and fantastic? Who cares! This tasted fantastic! As I’m writing this I could eat it again, I can safely say in my view this is top 3 thus far!

MR WHYTE: I can’t see my Tavuk Sis (chicken shish) & Adana Kofte (minced lamb) combo on the menu. This should be a standard item on any Turkish menu, not just individual options. However, the waiter said he will still make it happen, maybe because we were streaming the #RealMadrid v #BayernMunich #championsleague #football game via my #ipad at the table, which attracted various waiters to stop by whilst serving other diners.

Of the Turkish restaurants on the #bestturkishrestaurant shortlist, this meat on the plate looked the best. The meat reminded me of when you get a first glimpse of your new car, which is waiting for you on the forecourt, all shiny and fresh out of the factory. Well the Tavuk Sis & Adana Kofte were fresh off the grill. Sizzling with a shiny glaze. Taking pictures of the meal took too long! You know like that friend who loves taking a selfie in the middle of the rave when your favourite #ragga song comes on and you just want to #bogle.

The knife sliced through the Tavuk Sis like a hot knife through butter. The succulent chicken melted in my mouth. The seasoning could be tasted throughout each chew. THIS IS TRUE TURKISH FOOD! Taking me back to my last visit to #Fethiye.

Now, could the Adana Kofte match up? Yes it could! Again, continuous flavour from start to finish, seasoning with a distinctive zest. This level of cooking separates Gokyuzu’s minced lamb from the @antepliler and @capital_restaurant attempts. So good, it is worthy of being in the Adana Kebab Champions League final versus Mangal 1 (my all time favourite Adana as mentioned by Rain). I can’t wait to return to Mangal 1 and compare the two.

One thing to note, Gokyuzu’s Tavuk Sis & Adana Kofte combo was billed as two separate dishes instead of a combo deal, in real terms the same dish cost £13 at Antepliler, but cost £19 at Gokyuzu. However, as they say, you get what you pay for in life and I would pay the extra £6 again for this superior standard of Turkish food.

SLYSTA: Some of the man dem get confused at certain restaurant choices I make especially when i say I’m going to a Turkish restaurant. Reasons are understandable. Turkish cuisine = meat + meat + more meat! Still being on my transition to Vegan journey coming to a place like this, so full of temptation, is like going 12 rounds with @AnthonyJoshua – very much a fight! But determined to win I stuck to my Vegan diet.

Now I’m not the biggest fan of rice, so with Turkish I like the alternative option which is bulgar wheat. A great alternative especially if you want to watch your carb intake.

My mains consisted of bulgar wheat and a plate of falafels with hummus in the centre with carrots and cucumber. I must say I did like the presentation but my stomach said fix up, you’re  here to satisfy not visually admire.

The first taste of the bulgar wheat met my every expectation, the taste, texture, if perfect was a dish this would be it. The Falafel was well put together. The infusion of herbs, spices, made for a very tasty dish and it was cooked just right. I have memories of #Gokuyzu when I ate meat and LISTEN to me when I say I can still remember the taste, the quality…. aaaahhhhhh memories! I know the rest of the mandem are enjoying right now… I mean there was silence across the table so that must say something. For me Gokuyzu is winning right now.

SPEEDIE: The menu has so much to choose from. They even do a breakfast. Already this restaurant is far superior to the others on the infamous Green Lanes. I’m sure, by now, you’re very aware that sometimes I take risks with my food choices. Some have worked out and others not so much. I could have played it safe like certain man and just had a chicken shish or a mixed grill. Not this time. I asked for a Turkish pizza. What was I letting myself in for? I’ve never even heard of a Turkish pizza before. What’s the difference between this one and an Italian? Who’s pizza is best? So many questions running through my mind. I hope it’s nice.

I ordered the Kıymalı Kaşarlı Pide, it had minced lamb, mozzarella with green and red peppers. When it arrived it didn’t come how you would expect a traditional pizza to be. It was cut into thin rectangular slices. Think flatbread with toppings on. I was pleasantly surprised with my first bite. You could taste all the ingredients and the peppers were particularly delightful.

Although I’m not the biggest cheese lover (see what I did there, word to Mr Whyte) I would have liked for there to be more cheese on the pizza as I feel the lamb was overpowered by the peppers. The meal was nice and light and I didn’t feel stuffed when I finished. I was very satisfied. As a warning, make sure you carry chewing gum or mints with you as I could taste the garlic later on and I didn’t have anything to freshen up my breath with. Overall a very tasty dish which I will definitely order again.

SERVICE: Super friendly team, we didn’t feel rushed to eat and depart like in some Turkish restaurants, despite it being a busy night.

OVERALL: We can now understand why Gokyuzu is a firm favourite amongst Turkish food lovers.

One of the waiters even found time to explain what Gokyuzu meant, which is the ‘The Sky’. Given the service and food Gokyuzu is certainly in the running for London’s Best Turkish Restaurant.

Other Turkish restaurants either have good service but bland food, or bad service but great food. Gokyuzu have all aspects spot on, giving a truly authentic Turkish experience, tasty food served by friendly Turkish waiters.