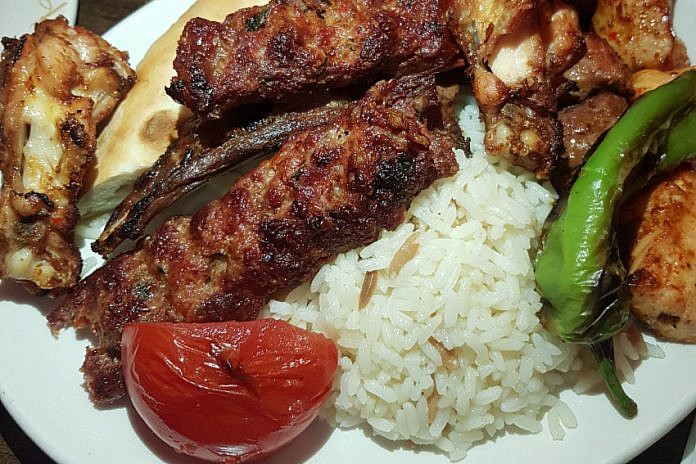 Continuing our quest to find the #BestTurkish restaurant in London, our search takes us to @IstanbulRestaurantDalston.

Although the address says Stoke Newington Road, ironically it is actually placed in #Dalston between the #trendy areas of #StokeNewington to the north and #Shoreditch to the south. This restaurant has been in operation for just over 10 years but seems like it’s a newcomer as it largely goes unnoticed among the plethora of Turkish restaurants in the area.

Coming in highly recommended from one of our @instagram followers who states “It’s amazing, even Turks eat there!” we felt obliged to add it to the contenders list. Will Istanbul come up to scratch or will we have to block our follower!? Lol Read on to find out.

STARTERS: On our Best Turkish quest there has been some contention about starters aka the infamous bread you get while you wait for your meal.  Some have been dry, some crispy, some cold!

We ordered and the standard bread came whilst we waited for our meals. Wait, scratch that! Did I say standard…wrong this bread was in no way standard this bread was like… imagine what you think a cloud would taste like if you could eat it then you gave it a quick zap with lightning to make the edges crispy… well that!!

Made on site, this bread was warm (almost hot), soft, light, fluffy, melt in the mouth, a good 1 inch thick and plentiful! This is the #WorldCup winner of Turkish bread! The bread was simply the best – word to @TinaTurner . The bread was a dream…delightful even! Here at Istanbul this is a clear winner… We could happily return here just for this bread alone! Let’s hope our mains maintain this level of goodness.
SLYSTA (aka The Vegan

): I have been here before and was thoroughly impressed with the food. But back then I ate meat. I checked the menu, for once, there was a good variety for vegetarians. Impressed, this got me thinking shall I be cautious with my menu choice or be adventurous like Speedie and live a little? Hmmm…a page out of Speedies’ book it is!

I decided to go for the ‘Mantar Sote’ which is basically a mushroom and vegetable casserole served with bulger wheat.

The mains came shortly afterwards. Presentation was what I expected… a dish with a casserole in it. They also brought me over a side of rice, which was a mistake but swiftly corrected. However, something said to me “Sly, keep the rice”. First mouthful… I was trying to figure out what I was eating. Second mouthful, I tried the bulgar wheat… knew it! I should‘ve kept the rice! ??‍♂ It was terrible, but I kept going. Third mouthful, I was still confused as there was no taste. I had to put salt and pepper, which helped but not enough. I don’t know if it’s just me but I think after three mouthfuls of anything I should be able to at least taste something. I honestly could not isolate a particular taste. At this point I was upset and went for the last piece of bread… not even the bread helped.

Based on my previous visit I’m going to say this was an off day and I chose the wrong dish. (Me trying to be nice). At least I had dessert to look forward to. For dessert, I got a Strawberry Cheesecake which was nice but nothing to write home about and didn’t make up for the poor choice of mains. I’m having mixed feelings about this place right now.

TONGO (aka Sweet Tooth): Being local to the area I am aware of Istanbul but it has never stood out to me to visit before now. We enter and the place is majority empty for a Thursday evening, maybe like a third full, however they do open till 2am so we may just be a little early. We are attended to immediately and given choice of where to sit. Central and near the front seems about right, that way we can make good observations.

For my main, I ‘had to’ get the Ozel Karisik kebab. That’s a large mixed kebab for those like me that only knows Turkish words when they’re written on a menu. This dish consisted of: lamb & chicken shish, adana kebab, lamb chops and chicken wings served with rice & salad. I mean ordering anything less just seemed like I was practising self hate and in the words of @LilRickHD… “Ah like muhself!”

The meal arrived and the quantity was less than I expected but too much food for me to eat in one sitting #doggybag for tomorrow’s work lunch me thinks. I liked that the meal actually came with rice rather than the menu saying rice but bright red / orange bulgar wheat arriving instead. I tasted each meat individually and all were the usual succulent and well cooked. The stand out item was the adana but I’ll come back to that shortly.

I had to take a second bite of each meat (except the adana) to assess the flavour. I must mention that surprisingly the lamb shish and lamb chop tasted slightly different to each other rather than the majority of times where the chop tastes like the shish but with a bone. They were all well seasoned with good flavour but were still missing a little something. Don’t ask “what?” as I can’t put my finger on it so have no idea. However, there was no disappointment with them, all in all, a nice selection of grilled meats.

The adana – it had a more individual taste, maybe a little more paprika, a little more salt, maybe just because it was a different texture of meat  #whoknows but whatever it was, combined with the herbs and other visible ingredients gave it the edge over the other meats. It even seemed to be just that little bit more succulent! Oi, Whyte, I think we might’ve found your new @Mangal_Ocakbasi bro!

Being that I had already decided I was taking home a doggy bag I held back eating all I could of the main and made sure I left space for dessert. I am nicknamed Sweet Tooth after all and after perusing the dessert menu (whilst waiting for our meals) I had already seen that I wanted to order about 6 desserts so at least one was a must!

Eventually I settled on the Banoffee Pie and I think I made the right decision. Not too sweet so didn’t have that sickly feeling. A good balance of banana and toffee flavour, with a nice crumbly base. I prefer my biscuit bases a bit thicker and more crunchy but it all worked well together. The creamy top with chocolate shavings were a nice touch. I need to come back to try those other desserts.

SERVICE / OVERALL: Istanbul is a nice “all round” Turkish restaurant. It wasn’t the most exemplary service considering it wasn’t packed but there were no complaints either.

They have a considerate selection of dishes on the menu for all palates including a healthy #nopunintended vegetarian section, kids section, (which you rarely find on Turkish menus), rather extensive dessert menu and a good range of drinks including all types of alcohol.

This restaurant is a good place to visit for most occasions whether a family meal, group of friends, date night or even an after work meal with workmates. They even have a take away option and open late for when you want somewhere on those spontaneous occasions where you don’t want take away and everywhere seems to be closed.