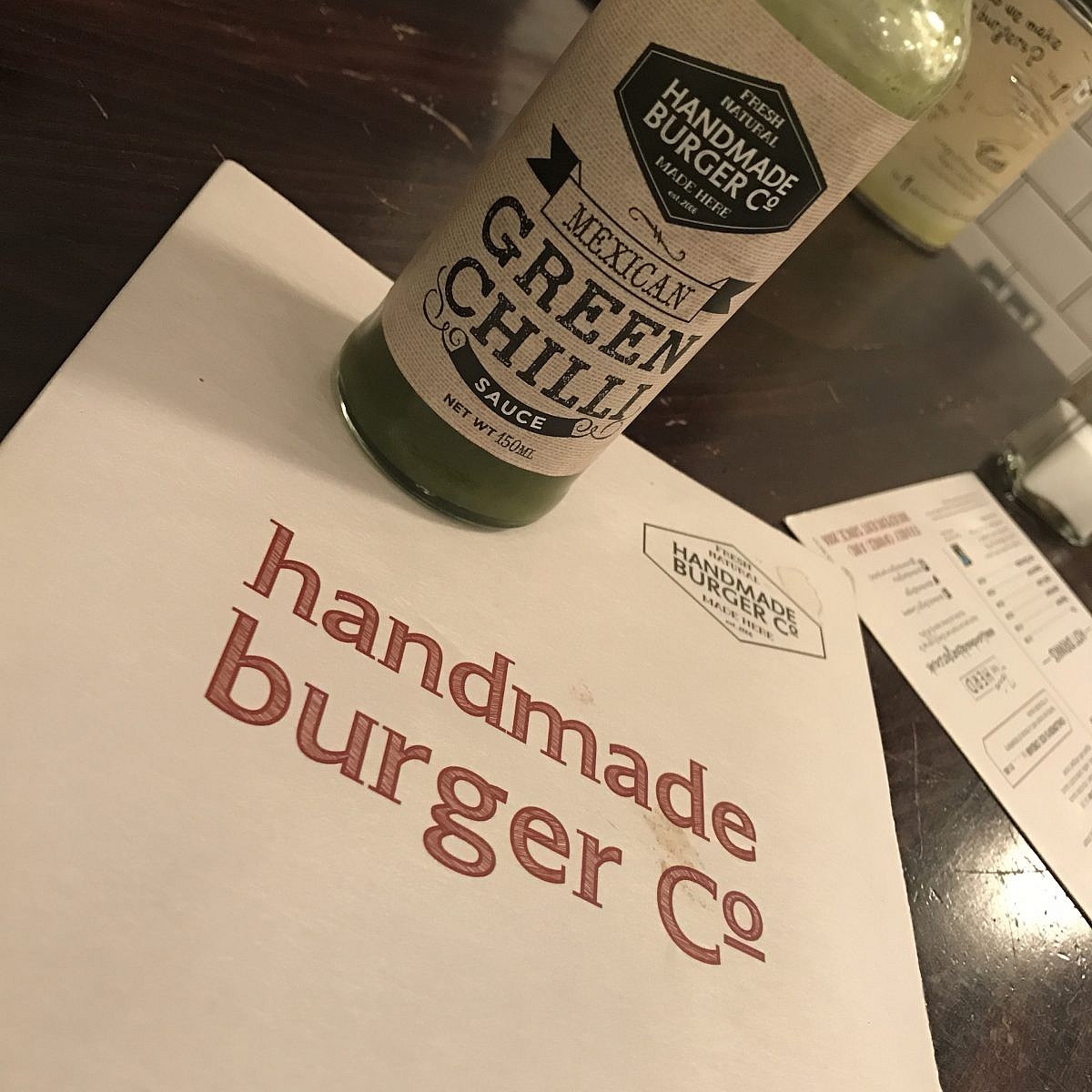 Where is the best burger in London? This is an ongoing argument amongst the @ManDemVFood team.

The Photographer prefers @meatgram. Sweet Tooth can’t get enough of @dirtyburgerldn. The Manager thinks no one does better burgers than @fiveguysuk. Cheese Lover is obsessed with @pattyandbun. The Vegan

just craves any burger with real meat in it and not #quorn. And finally Pepper Man… Pepper Man took a random shopping trip to Reading, stumbled across @handmadeburgerco and ever since has been banging on about being “The best burger EVER!” whenever the ‘Best burger in London’ debate is re-visited, despite it being out of London.

The rest of the lads had never heard of #handmadeburgerco or their alleged 40 varieties of #burgers.

There were only so many months we could keep ignoring Pepperman’s Handmade burger rhetoric, especially when he found out there is a branch in #Wembley. So The Manager and Cheese Lover reluctantly agreed to put Handmade Burger to the test and took a visit to North West London with Pepper Man.

However, if the burgers are no better than @mcdonalds Cheese Lover wants some petrol money for his long journey around the A406.

Did Pepper Man end up at the nearest petrol station with his hand in his pocket or is there another contender in the Man Dem V Food’s pursuit to find London’s best burger?

PEPPER MAN: It’s been a long time coming but the time is finally here. I’ve managed to convince the #mandem to travel a lil further out than they would like to and head to Wembley. What’s in Wembley they say? Handmade Burger Company. I went to their other branch in Reading a while ago and oh my gosh. BEST BURGERS EVER!! Yea I said it. I’ve laid my cards on the table.

I ordered the HBC Cheese & Bacon. The burger consisted of a single beef patty, cheese, bacon, lettuce, tomato, red onions and BBQ sauce all sandwiched between what we were lead to believe was a fresh #handmade buttermilk bun. For a side I felt daring and opted for the newly added Mexican chips. These were thick cut like the ones you get in a fish & chip shop. The reason why they’re called Mexican chips is because they are topped with melted cheese, salsa, chipotle sauce, hand crushed avocado and jalapeños.

The chips were dead! Simple as that. I liked the idea of the cheese, salsa & avocado but in reality they didn’t do it for me. They were really thick so heavy going down and flavourless so adding the extra ingredients helped but not enough. The chipotle sauce was absolutely awful on them. My preference is fries over chips all day all day (Kanye) so i wouldn’t order them again.

Now the burger, oh gosh, I had been looking forward to this all day. I dived in like Tom Daley at the #Olympics. My first bite had my eyes rolling back in my head like when you put a cotton bud in your ear and you hit that spot. The beef and bacon along with the BBQ sauce all went together perfectly. But hold on! After a few more bites, I realised this could have been a lot better. Maybe all the excitement got the better of me. Something wasn’t right. I started to think and I came to the conclusion that the chef ever so slightly over cooked the patty. It was a bit tough and chewy, it began to be a task to eat it. Jaw bones working extra hard to break everything down. This was a major disappointment as I was really plugging this place like It was my actual restaurant. I said it had the best burgers EVER… several times! That’s a massive statement, even for me. I hope the others still enjoyed theirs…

THE MANAGER: Pepper Man said “It’s the best burger EVER” and that I would be “overly full”. Hmmmm… that’s a lot to live up to but we shall see. From the menu several burgers and the Hipster chips sounded promising. Although it’s a burger establishment we also partook in a helping of chicken wings, I mean if they are on the menu why would you not get a portion.

So, the wings, apparently seasoned over a long period of time, and come in two different flavours, BBQ and Hot. It was at this point I saw a nervous gleam from the eye of Pepper Man, ah well!

The wings were almost perfect! As much as I try to find a fault, I can’t. Beautiful texture and grade of chicken. It didn’t fall off the bone so that would suggest they were fried, also the slight, the ever so slight, crispness leans toward a fried wing. The sauces were amazing! In other establishments, it’s as if the wings are soaked in water before cooking or stored in a place where they develop an odd taste, but not these! They were fresh! With a taste sensation that I can only describe as intense, but not over bearing. I’d go back there just for those if the price was a little better, or should I say “pocket friendly”.

The chips! One of the man dem accurately nailed it… “these are pub chips” and I’d have to agree, but in my case they were pub chips with shredded cabbage and a hint of some form of mayonnaise or burger sauce on them. For me, a waste of money, there was no reason for me to pay £1 more for raw cabbage and mayo, the chips were not even crispy man! Not one iota! I would even go as far as to say they were soggy! And not even hot hot either, even @Nandos chips are better!

On to the Burger, I kept it simple and opted for the Cheese Classic and I can’t fault it, it wasn’t perfect, but I can’t complain, a thick beef patty, with lettuce and tomato (I don’t like tomatoes in burgers), original #HBC burger relish, mayo, red onion with a generous helping of what seemed and tasted like Swiss cheese. There was no option in regard to how I wanted the burger cooked, with that could it have been medium well to add to the flavour? Maybe, the burger bun was (as stated in the menu) #buttermilk which we were excited about, but for me #brioche buns have to be industry standard as they maintain the softness allowing for a perfect compliment to the burger and sauces. I wasn’t overwhelmed but I was definitely not disappointed, however, the Handmade Burger Co need to work on their chip man! Chat bout!

CHEESE LOVER: Pepper Man picked the American BBQ Bacon Stuffed for me (beef patty stuffed with Swiss cheese, topped with smoked bacon, HBC BBQ pit sauce, mayo, shredded iceberg lettuce & red onion with handmade coleslaw, topped with a gherkin). The buttermilk bun caught my eye, usually I like to keep things simple but his experimental ways have influenced me to open up my tastebuds. The only question I had for the waitress was about the Swiss cheese as I have never tasted it before. Her response didn’t instil any confidence, in fact she stated it wasn’t very nice lol.

Despite this place being called ‘Handmade’ burger I wasn’t able to make a straight swap and have cheddar cheese because the cheese is already inside the burger patty. Sounds more like ‘Ready made’ burger to me.

However, the waitress was very accommodating and suggested slightly tweaking the burger patty thus allowing me to change the cheese.

The burger itself reminded me of #Pogba. It was trying to be the best burger but instead was a young pretender with lots of potential. The ingredients were sourced from a high quality vendor, visually the burger could sit alongside the big boys, but two things let it down. 1. The buttermilk bun was too tough. I will be sticking to brioche in future. 2. The patty was slightly overcooked. Hugely disappointing and if Handmade Burger wants a seat at the ‘Best burger in London’ table they must train their chefs to be consistent!

All I will say about the chips is don’t bother, probably the worst chips I have ever had at a restaurant.

If I was in Wembley buying furniture at @ikea I would pop in for another burger, but based on this experience I would not trek around the A406 just to visit here again.

OVERALL: The service we received was pleasant, honest and efficient. We couldn’t ask for more. S/O to Kristina (our waitress) excellent job. The atmosphere was calm, but with it being Wembley, we assume that on an event day the place would be heaving with people. Unfortunately, the burgers were a slight let down; over cooked is never a good thing when you’re choosing the “best burger” in town.

However, this shouldn’t deter you from giving this place a try. With over 40 different variations of burger on the menu, there’s something for everyone. Pepper Man did state he had never been to the Wembley branch and his views were solely based on the Reading branch. Looks like he’ll still have to fork out for some petrol for a road trip for the mandem to go to Reading to redeem himself.

That might reduce the banter but Pepper Man is still going to get it in the neck for this one… well, until someone else pipes up with another burger place that is. Anyway, the ongoing best burger debate continues…

We give Handmade Burger Co an average but fair 4 out of 6 Man Dems.

Handmade food that we are proud of…